Celtic Quick News on News Now
You are at:Home»Latest News»MAY THE FOURS BE WITH YOU: FORREST COMEBACK HOPE
By CQN Magazine on 13th February 2021 Latest News

JAMES FORREST is poised to make his first Celtic appearance in five months when Neil Lennon names him in his squad for the Premiership encounter against St Johnstone in Perth tomorrow.

The Hoops winger may look upon the opportunity to return from his ankle injury at McDiarmid Park as a good omen – he rattled in FOUR goals in an unstoppable first-half performance during a landslide 6-0 victory at the venue back in October 2018.

It was the 29-year-old Scotland international’s most dazzling solo performance for the Hoops as he claimed all his goals in a whirlwind 30-minute period as he shredded the opposition.

That lethal weapon has been denied the champions since Forrest limped off early in the European tie in Riga in September.

FLASHBACK…four-goal James Forrest with the match ball following his super solo show in Perth in October 2018.

Boss Lennon is ready to welcome back the much-decorated Celt, who along with skipper Scott Brown, won medals in the nine successive title triumphs.

The Hoops gaffer revealed: “James was training Monday and Tuesday, he went to see a specialist on Wednesday and we were hoping for the all-clear. We may have him in the squad for the weekend.

“Do some people take him for granted? You could say that, yeah.

“It shouldn’t be a reminder, but we have missed him, there’s no question of that.

“Could it have been a different kind of season? Absolutely, no question. He is a top player, a top boy, he loves the club.”

Lennon, speaking to the Daily Record, added: “James will have been missing playing more than anyone. 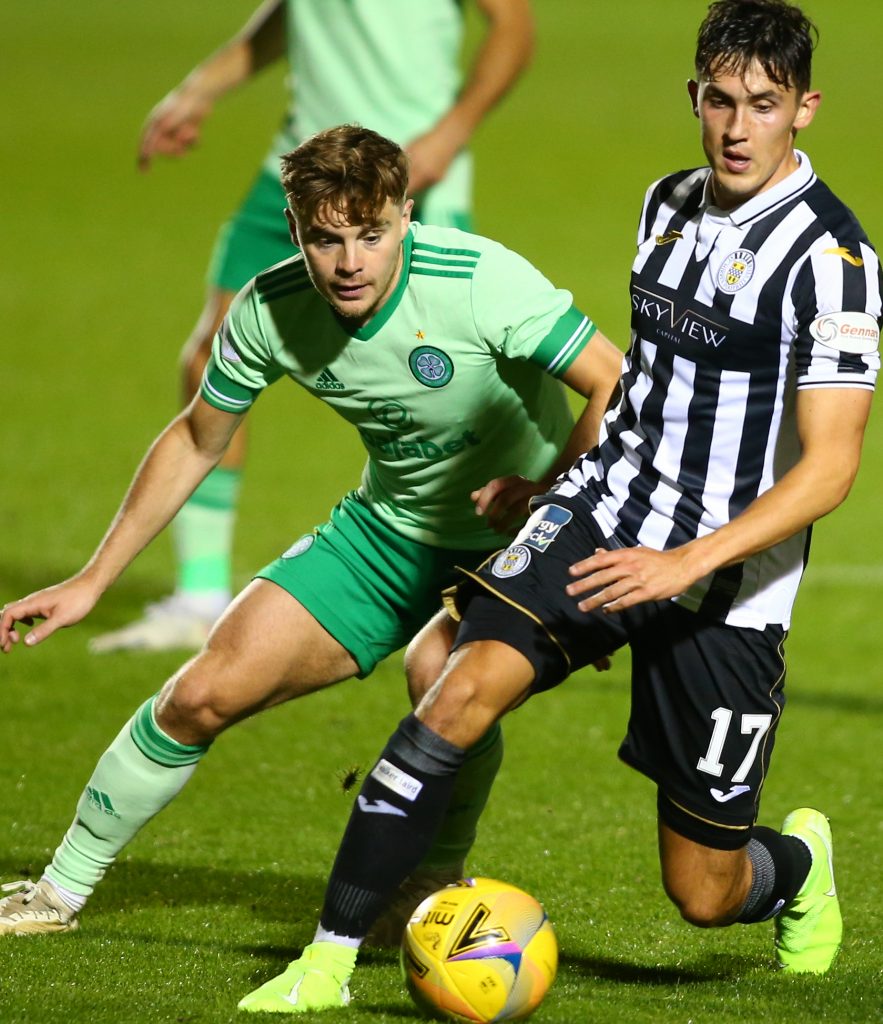 SAINTS AND WINNERS…James Forrest in action against St Mirren in Septemer when he scored the points-clincher in the 2-1 victory.

“Any team would miss a player of that quality. His contribution to this club has been unbelievable, magnificent, and certainly in my time since coming back.

“Before the lockdown, he was up around 18/19 goals and probably as many assists, as well,  and he’s been doing that consistently for the best part of six or seven years.

“James has had a stellar career so far and there’s a lot more to come from him.

“He just loves playing football. He’s one of those kids who doesn’t go on social media, doesn’t court public opinion, a bit like Callum McGregor.

“They just come in and play football, they’re natural-born footballers. We have missed him around the place and certainly missed him on the pitch, so it’s great to have him back.”