Celtic Quick News on News Now
You are at:Home»Latest News»MBOMBO: ‘YOU CAN’T SAY NO TO A CLUB LIKE CELTIC’
By CQN Magazine on 4th July 2019 Latest News

A BEAMING Boli Mbombo sealed his four-year Hoops deal – and readily admitted: “You can’t say no to a club like Celtic.”

The left-back had no hesitation in putting pen to paper on the £3million switch from Rapid Vienna which was flagged up by CQN 10 days ago.

Mbombo – or Bolingoli-Mbombo to give the 24-year-old defender his full title – is determined to make a crucial first impression at the club amid continued speculation Arsenal and Napoli will step up their efforts for £25million-rated Kieran Tierney.

The pacy defender revealed he was keen to join the eight-in-a-row champions and play his part in making sure the silverware continues to pour into Parkhead.

Mbombo, speaking to the club website, said: “It feels great to have signed for Celtic.

“It feels amazing, actually, to be part of the Celtic Family. I’m happy to be here at this club and, hopefully, I can help win more titles and trophies. This club wants to continue breaking records and, hopefully, we can do that in the future together. 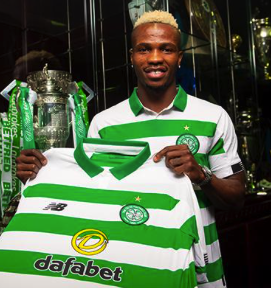 “I heard last week that the club were interested in me. They contacted my agent, and I said yes immediately.

“You can’t say no to a club like Celtic.”

The attacking full-back added: “Celtic have always had great players and, of course, they’ve had a number of great Belgians, too. Dedryck Boyata is one of them, and I’m happy to follow in a similar path. He had a positive influence on this club and, hopefully. I can do the same.

“I’m fast, and I use my skills and my speed on the left side. I love to play and I enjoy my football.

Coincidentally, Mbombo, who started his career at Club Brugge, made his debut for the Austrian club in a friendly against Celtic in the summer of 2017. It ended 1-1 in Vienna with Moussa Dembele equalising with a penalty-kick with 17 minutes to play.

The Hoops boss is looking for extra defensive cover in both full-back positions. Following the departures of Mikael Lustig and Cristian Gamboa at the end of their contracts, Anthony Ralston is the only natural No.2 at the club while the exit of Emilio Izaguirre has left the Irishman short of options on the opposite flank.

The deadline for signings before Tuesday’s opening Champions League qualifier against FK Sarajevo in Bosnia is 11pm this evening.