ANGE POSTECOGLOU will get the opportunity today to explain the no-show from James McCarthy in his squad for the 2-0 win over Motherwell at Fir Park at the weekend.

The Glasgow-born Republic of Ireland midfielder has made only two starts in eight appearances since joining as a free agent after leaving Crystal Palace at the and of his contract in the summer.

Thirty-year-old McCarthy has made a slow start at his boyhood idols, but legendary keeper Pat Bonner helped clear up some of the mysterious non-appearances in a report in CQN last month. 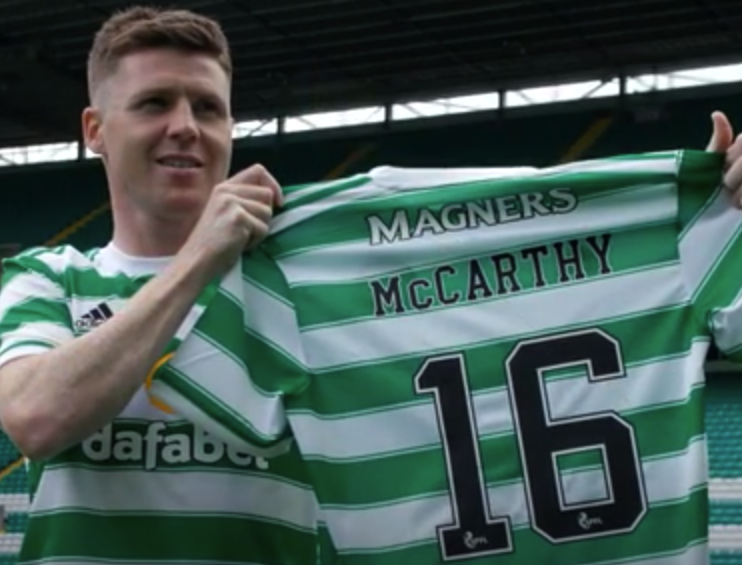 PARADISE FOUND…James McCarthy holds aloft a Celtic shirt after signing a four-year contract at the start of August.

There were fears over the fitness of the smooth operator after his fragmented last season at the Selhurst Park outfit following a serious injury during his Everton days.

However, following a stringent medical, McCarthy agreed a four-year deal at the Parkhead club at the start of August.

The anchorman was an unused substitute in the 2-1 win over Aberdeen at Pittodrie before the international break and the player was reported to have put in the yards at Lennoxtown as his team-mates such as Callum McGregor, Kyogo Furushi, Tom Rogic, Nir Bitton and Liel Abada were involved in the action of the World Cup double header for their respective nations.

However, McCarthy did not make the stripped squad for Fir Park on Saturday which again sparked speculation about his availability during a crucial campaign.

Postecoglou will meet the media today to discuss tomorrow afternoon’s Europa League Group G match against Ferencvaros in Glasgow and may be able to shed some light on the situation.

With the games coming thick and fast until the turn of the year, an experienced performer such as McCarthy will be invaluable to his manager.