Celtic Quick News on News Now
You are at:Home»Football Matters»McCLUSKEY’S CRUYFF MEMORY
By CQN Magazine on 25th March 2016 Football Matters
GEORGE McCLUSKEY recalled the night he had to hold Johan Cruyff’s cigarette while they swapped shirts.
The Celtic striker scored the winning goal when they knocked out the Dutch legend’s Ajax side in the first round of the European Cup in 1982. 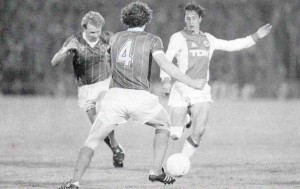 Cruyff, even at the age of 35, inspired his team-mates to a thrilling 2-2 draw at Parkhead in the first leg.
However, Billy McNeill’s tactics turned the game around in Amsterdam when Charlie Nicholas and McCluskey claimed the goals to shock the former European champions 4-3 on aggregate.
McCluskey recalled: “He was a bit older by that time, but he still had tremendous ability and a presence about him, and I think we were a wee bit in awe of him.
“I was lucky enough to swap jerseys with him. I went into the Ajax dressing room after the game looking to swap a jersey, but none of their players would do it. 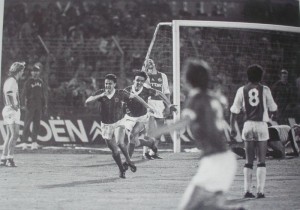 “Johan Cruyff was on the physio’s bench getting a rub-down and he shouted me over and said he would do it.

“He swapped jerseys with me, which was great, and he was gracious in defeat.
“I remember I had to hold his cigarette while he removed his shirt!”
* ‘The Amsterdam Thrill’ is covered in a full chapter in ‘Caesar and the Assassin’, published by CQN in 2014 and available at CQN Bookstore.