For any football club to be licenced to play in Uefa competition it has to be up to date with social taxes. The world wondered why in the years prior to their liquidation owing tens of millions to HRMC, Rangers managed to remain up to date for every licence application (made through the SFA).

Football authorities are bound by certain limitations. They can oblige clubs to make them aware of any overdue taxes, but if this information is not forthcoming, they have no powers to demand information from the tax authorise. In short, if you lie, you will get away with it, until and unless you are caught.

Nor can football authorities deal in information of dubious probity. “Some guy on the internet gave me this document” which they should not legally be in possession of, is not the basis to charge a club.

McIntyre was shown a document dated 2010 from HMRC to Rangers saying tax for PAYE and National Insurance was due on Rangers Discount Options Scheme (DOS), involving players Tore Andre Flo, Craig Moor and Ronald de-Boer was “payable in full”. This tax was never paid and £500k of interest accrued until the club went into liquidation.

McIntyre told the court Rangers had “no choice but to accept liability” as due to the existence of a “side letter”.

Despite this, Rangers signed off their licence application in March 2011, which enabled them to take Scotland’s Champions League qualification spot for season 2011-12.

The irony of this information coming out in a fraud trial will not have escaped you. Some key points:

Information that Rangers were overdue to HMRC prior to their Uefa licence application in 2011 has been confirmed by a competent officer of the company for the first time, in open court.

Rangers DOS scheme for Flo, Moore and Ronald De-Boer was not subject to the SPL’s Lord Nimmo Smith Commission inquiry and has not, thus far, been investigated.

Mr McIntyre is still in the witness box giving evidence.

A note of caution: this is all new information, and anyone who tells you there is an easy way to navigate to the desired outcome is almost certainly overlooking a great deal. It has taken time and patience to get here, both of which are still needed.  The banner above is a manifestation of someone else’s neurosis. It’s not the actual truth, so realise this or, as they say, keep taking the pills. What you can be assured of, is that no stone will be left unturned.

Our raffle for two tickets for Ibrox on Saturday, courtesy of Celtic sponsor, Intelligent Car Leasing, ends tonight at 23:00. We have had very little time for this one, so get in quick. All monies raised goes straight to Mary’s Meals.

Please enter by making a minimum donation of £5 here, and send me the confirmation email you receive, with the word “Pedro” in the subject line, to celticquicknews@gmail.com . Make sure you enclose contact details. 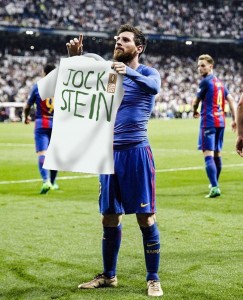 DELIGHTED THAT IT HAS ARRIVED!