CELTIC Youth Coach Stephen McManus was far from downhearted after his talented youngsters lost 3-2 to their Ibrox Under-18 counterparts in the SFA Youth Cup Final at Hampden, as CQN reported last night.

The former Hoops and Scotland international central defender looked on in disbelief – as did the 1,500 restricted all-ticket crowd and thousands over TV viewers with BBC Scotland beaming the action live – when the opposition took a two-goal lead inside six minutes.

Slack defending allowed the Govan kids to score from two set-plays, but parity was restored within three minutes of the turnaround when the impressive Cameron Harper accepted a perfect pass from Karamoko Dembele to stroke in a left-foot effort beyond the stranded keeper to pull one back. 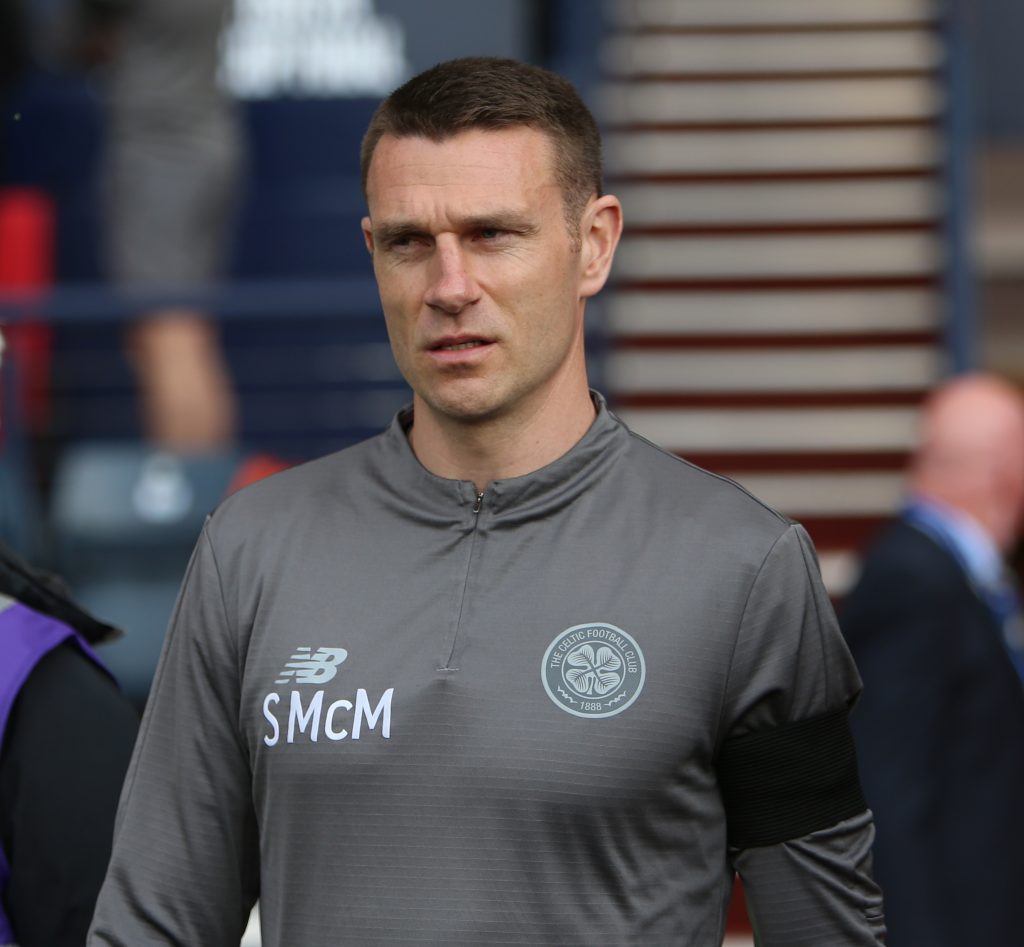 NOT DOWNHEARTED…Stephen McManus watches from the touchline last night.

And the Parkhead prospects were celebrating again moments later when a 25-yard free-kick from Paul Kennedy took a deflection off the wall and bamboozled the goalie.

But the good work was undone as the defence went to sleep at a 66th-minute left-wing corner-kick when Nathan Young-Coombes was given a clear header from six yards and he planted the ball beyond the helpless Liam Hughes. The Hoops keeper prevented a fourth goal shortly afterwards with a fine diving save from a penalty-kick by Kai Kennedy.

However, McManus, who must have been impressed by his babes, in particular American Harper, was not downbeat afterwards.

Speaking to the Scotsman, he said: “Everyone should have enjoyed that game. We asked the boys to show resilience and determination in the second-half and they did that.”

CQN‘s ace snappers were at the national stadium to capture the best of the action. Here is the pick of the pics. 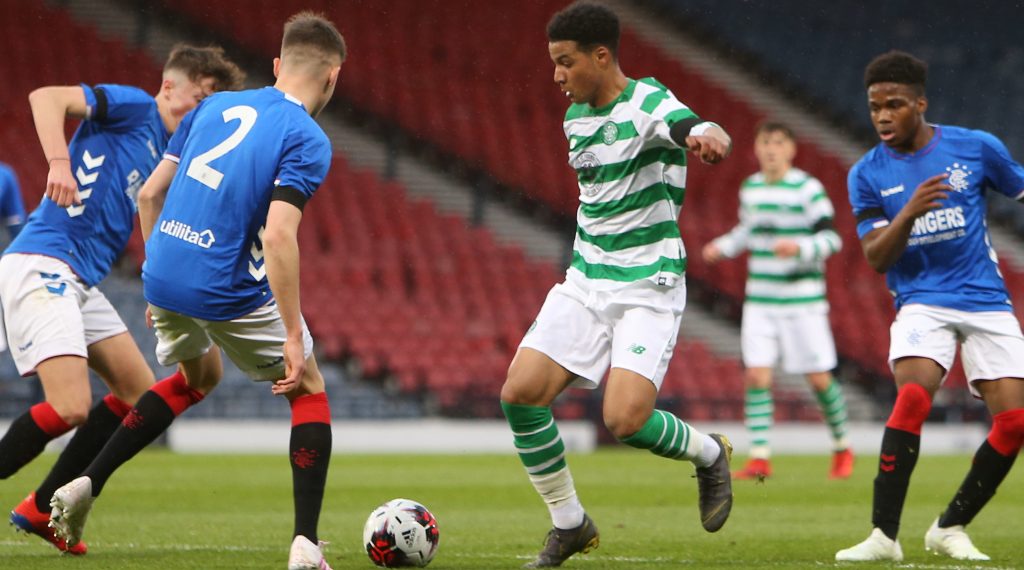 ON THE BALL…Armstrong Oko-Flex is outnumbered three to one as he takes on the defence. 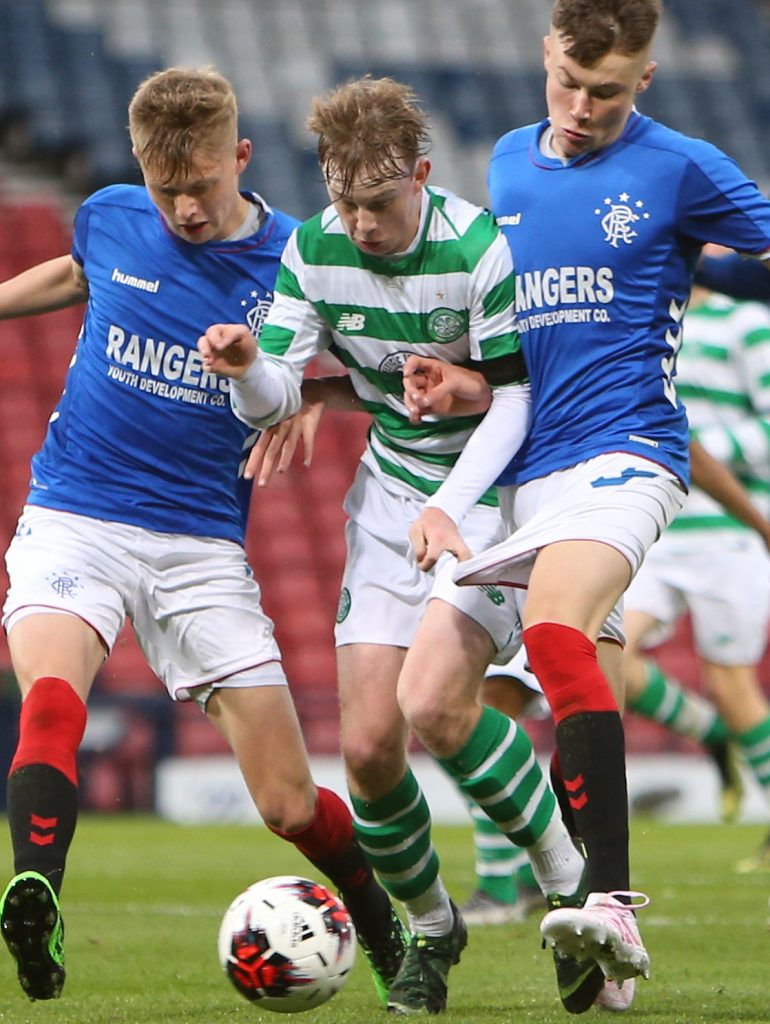 CRUNCH…three into one doesn’t go as a trio of combatants challenge for the ball. 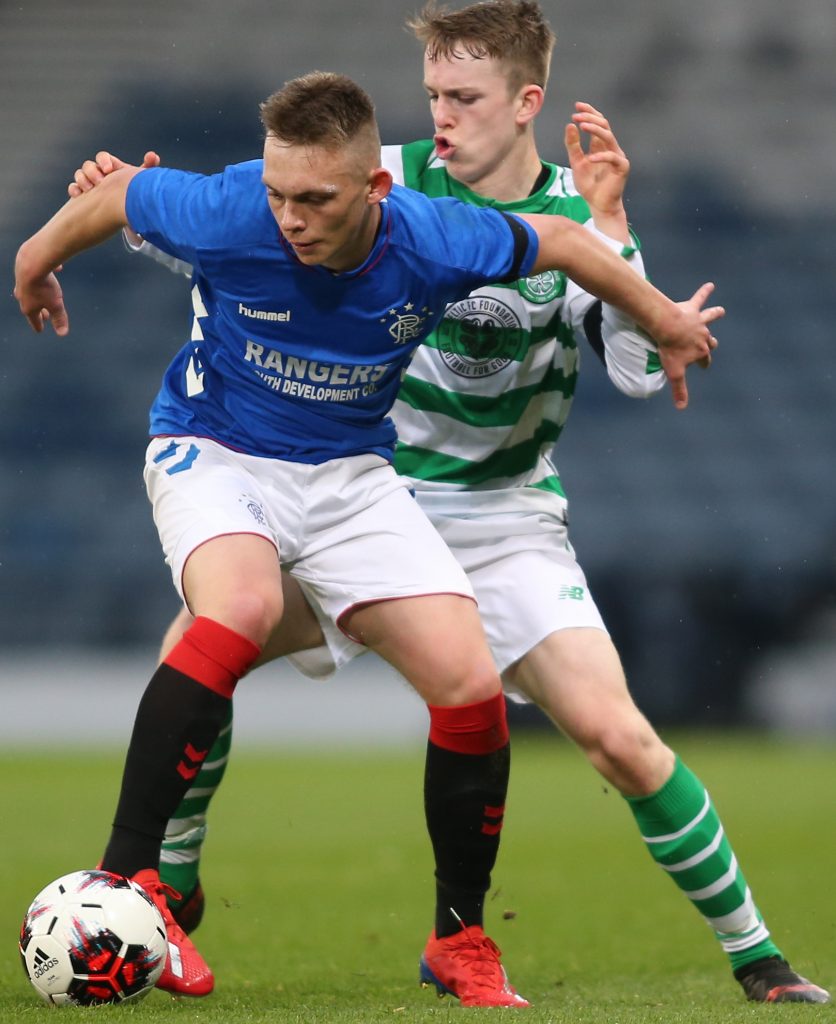 SHOVE OFF…an Ibrox defender shields the ball from his rival. 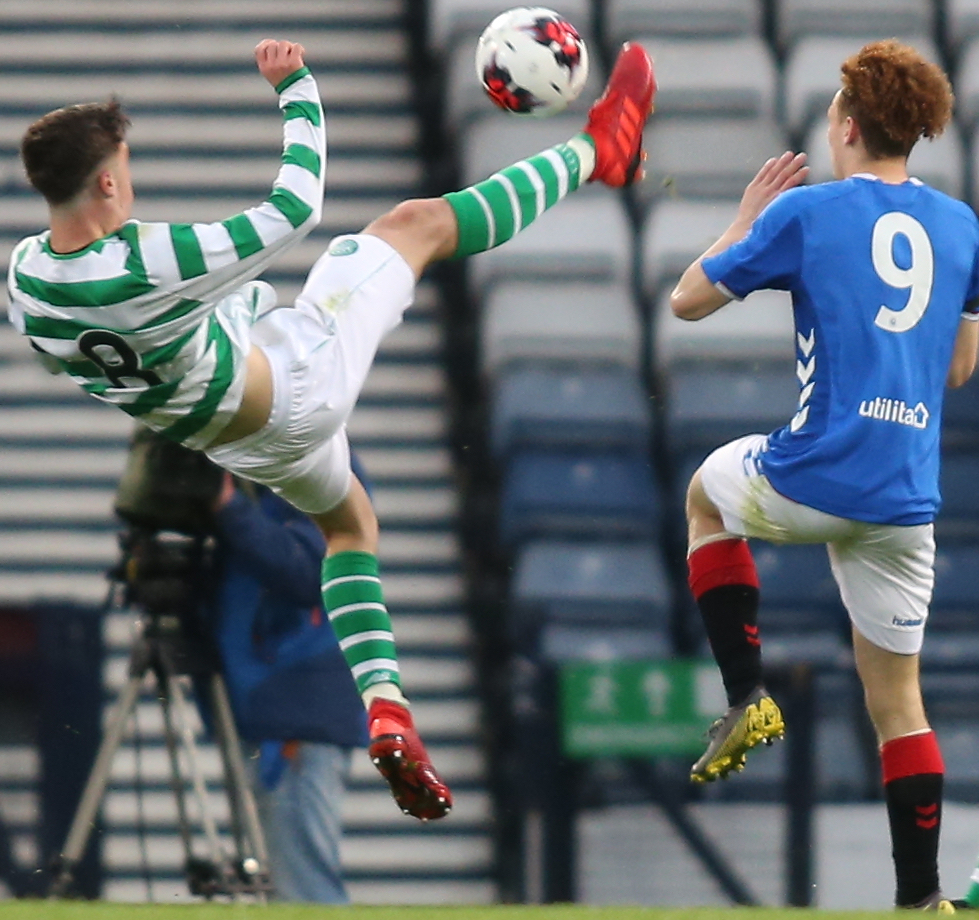 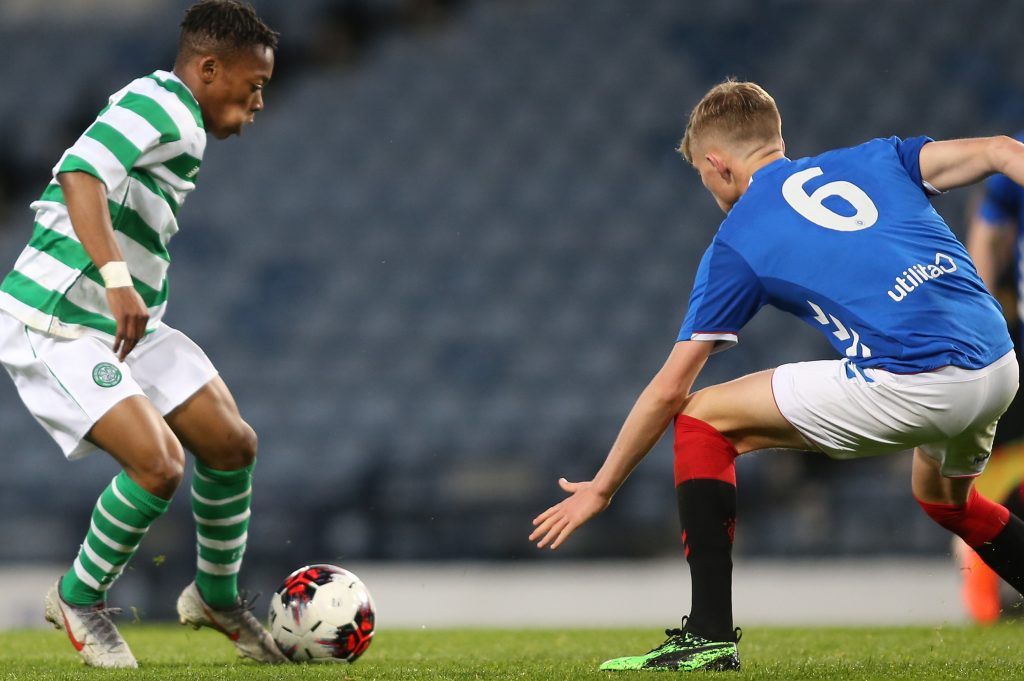 TOUCH’N’GO…Karamoko Dembele ready to take on an opponent. 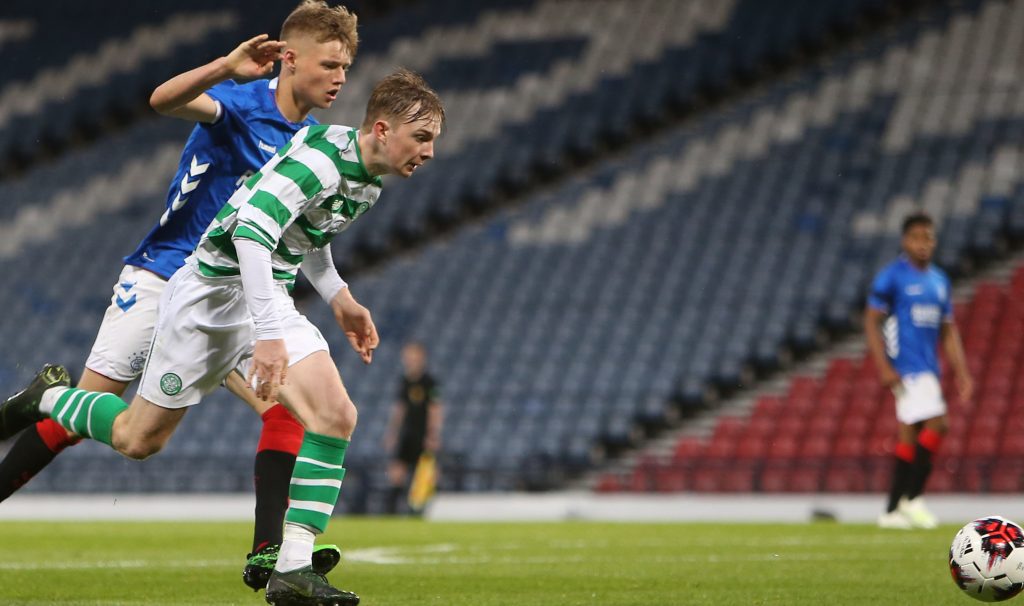 DANGERMAN…Cameron Harper puts on the pressure. 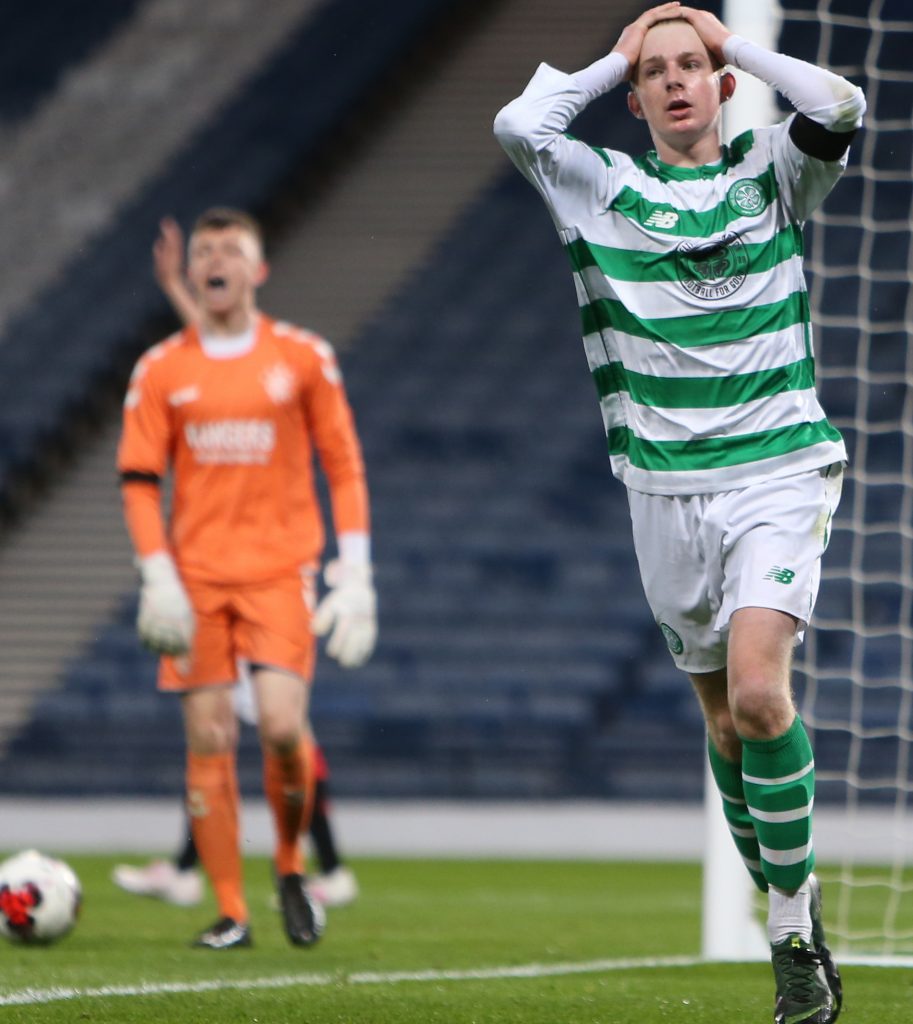 OH, NO…Cameron Harper is dismayed when his late header is disallowed. 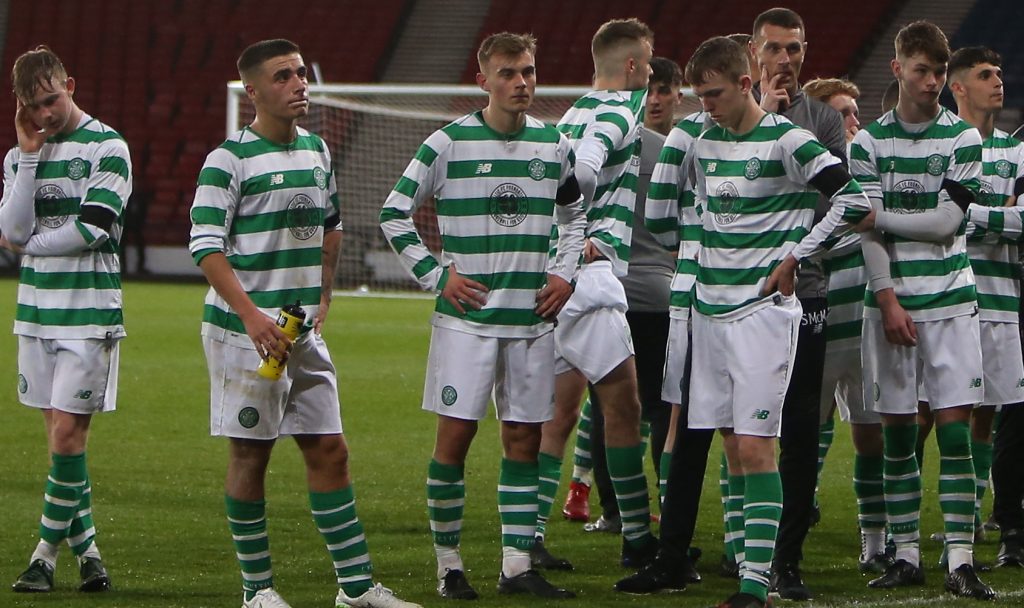 HAMPDEN WOE…Stephen McManus stands with the youngsters at the end.