The 23-year-old winger, who joined Celtic from St Mirren for £250,000 two years ago, flew back from the champions’ Dubai training camp for talks with the American club earlier in the month.

Negotiations were completed over a week ago, but visa red tape stalled the deal until it was rubber-stamped this evening as the midnight deadline loomed.

The Scotland international raider made only 11 starts and 20 substitute appearances for the Hoops while scoring two goals.

Morgan led the attack against Steven Gerrard’s Ibrox side in the Betfred League Cup Final last month before being replaced by Odsonne Edouard on the hour mark. Neil Lennon’s men went on to win the silverware with a goal from £7million summer signing Christopher Jullien.

It was a fairly sedate transfer window for the eight-in-a-row champions following reports a proposed move for Newcastle winger Christian Atsu didn’t get off the ground with the 28-year-old Ghana international deciding to stay at St James’s Park to fight for a first-team place.

The £6.2million flanker, who joined from Chelsea in May 2017, has made 22 appearances for Steve Bruce’s side this season, but has yet to score a goal. 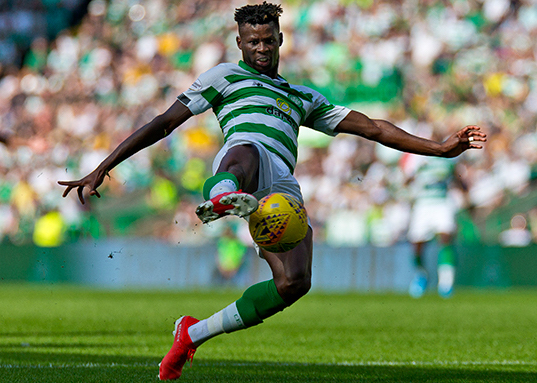 NO GO BAYO…the Ivorian striker is staying at the Hoops despite a late move by St Mirren.

Lennon had indicated he was on the look-out for a wide player with the long-term injury to Mikey Johnston in the 3-0 victory over St Johnstone in midweek.

The Irishman is short of options with Morgan heading for the States, Scott Sinclair agreeing a two-and-a-half year deal with Championship Preston and Mohamed Elyounoussi, on loan from Southampton, struggling to overcome a foot injury.

There were also reports on STV that St Mirren had made a late bid to take striker Vakoun Issouf Bayo until the remainder of the campaign, but Lennon had made it clear he was not interested in allowing the Ivory Coast frontman to leave.

Meanwhile, former loan Celt Filip Benkovic, who had been linked with a return to Parkhead on another temporary switch from Leicester City, has joined Bristol City until the end of the season.

Ex-Celtic gaffer Brendan Rodgers wanted the Croatian central defender to go out to get some game time. He has failed to make a first-team league appearance in this campaign.

Boss Lennon has already insisted he is satisfied with his current squad following his £3.5million swoop for Polish striker Patryk Klimala and his £2million purchase of Ivorian defensive midfielder Ismaila Soro.