Celtic Quick News on News Now
You are at:Home»Latest News»‘MILES AHEAD,’ BAIN REVEALS HOW CELTIC DEAL WITH PRESSURE
By CQN Magazine on 6th May 2019 Latest News

SCOTT BAIN made a crucial save from Aberdeen striker Sam Cosgrove when the scoreline was blank at Pittodrie at the weekend.

The keeper showed superb reflces to get down to his right to push away a low shot from the Dons hitman after a left-wing cross had dropped at his feet eight yards from goal.

Bain was alert, too, with the match scoreless against Kilmarnock the previous week when Chris Burke worked his way through the centre of the rearguard to be presented with a golden opportunity.

The Scotland international No.1 kept cool, didn’t commit himself and managed to block the Ayrshire side’s forward’s effort.

Two vital saves at important stages in back-to-back encounters that saw the champions go on to claim maximum points in both outings.

But Bain played down his part in the club’s eighth successive title triumph which was clinched against Derek McInnes’ outfit with goals from Mikael Lustig, Jozo Simunovic and Odsonne Edouard.

SMILES BETTER…Scott Bain with the newly-won League Cup in December.

Instead, the former Dundee shotstopper, who agreed a permanent deal with the Parkhead club in the summer at the end of his Dens Park contract, preferred to praise his team-mates.

The 27-year-old netminder, speaking to the Daily Record, said: “Across Europe, you don’t play with a team with more pressure on them than Celtic, 100 per cent.

“I played a minimal role compared to the other boys and they really need to get more credit than they have been getting.

“Time and time again, this team just comes up trumps and shows how strong mentally they are.

“They are miles ahead of everyone in terms of their mental strength. When the going gets tough and everything is getting thrown at them, they come through adversity every time.

“We beat Kilmarnock 1-0 at home and it wasn’t good enough. We have seen people say how it’s not been the same, how we’ve not been achieving what we’ve achieved before, but we still go on. We’re unbeaten (in 2019), we keep winning. 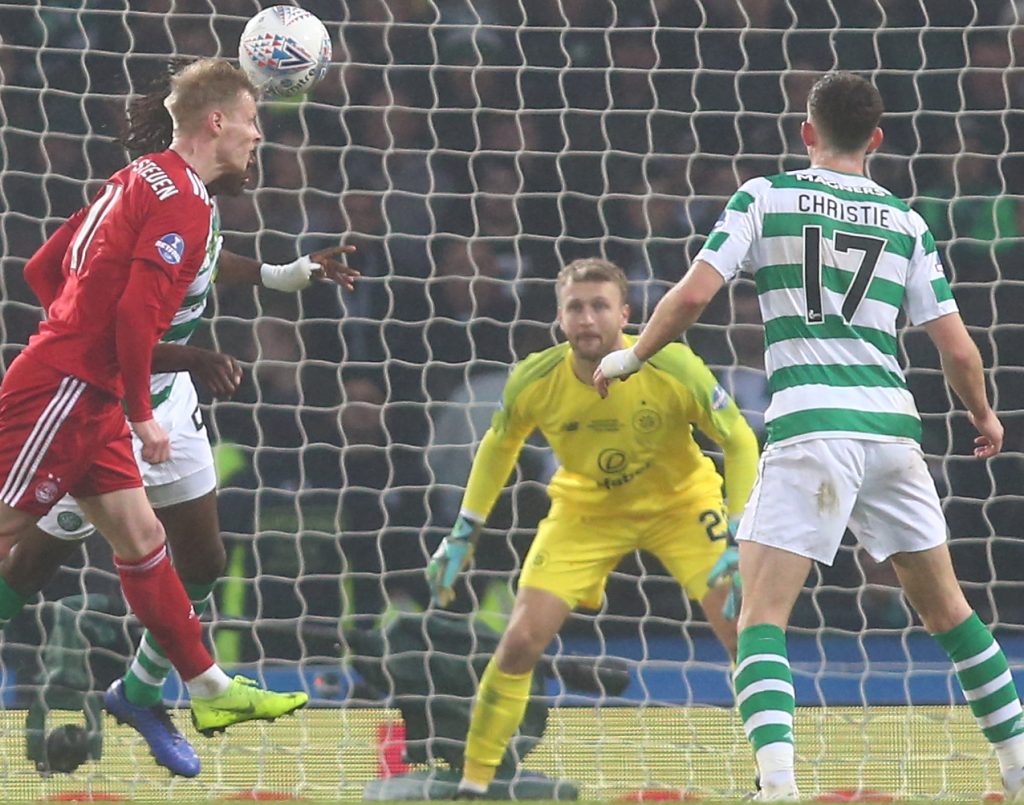 EYES ON THE BALL…Scott Bain prepares to save a header from Gary Mackay-Steven against the Dons in the thrilling Hampden encounter.

“The Celtic train just keeps marching on and the lads deserve full credit.

“People are going to criticise lads who are attempting to achieve greatness. So far they have achieved stuff that has never been done before.

“In terms of the changing room, I think the confidence and the ability never really wavers. The way the boys carry themselves is next level compared to everyone else.”

Bain’s clean sheet at Pittodrie was his 22nd in 26 domestic matches and in those games he’s lost just four goals.

He has earned two medals this campaign – in the League Cup Final in December and a Premiership badge, both coming in confrontations with Aberdeen which adds to the irony of his rise to success. 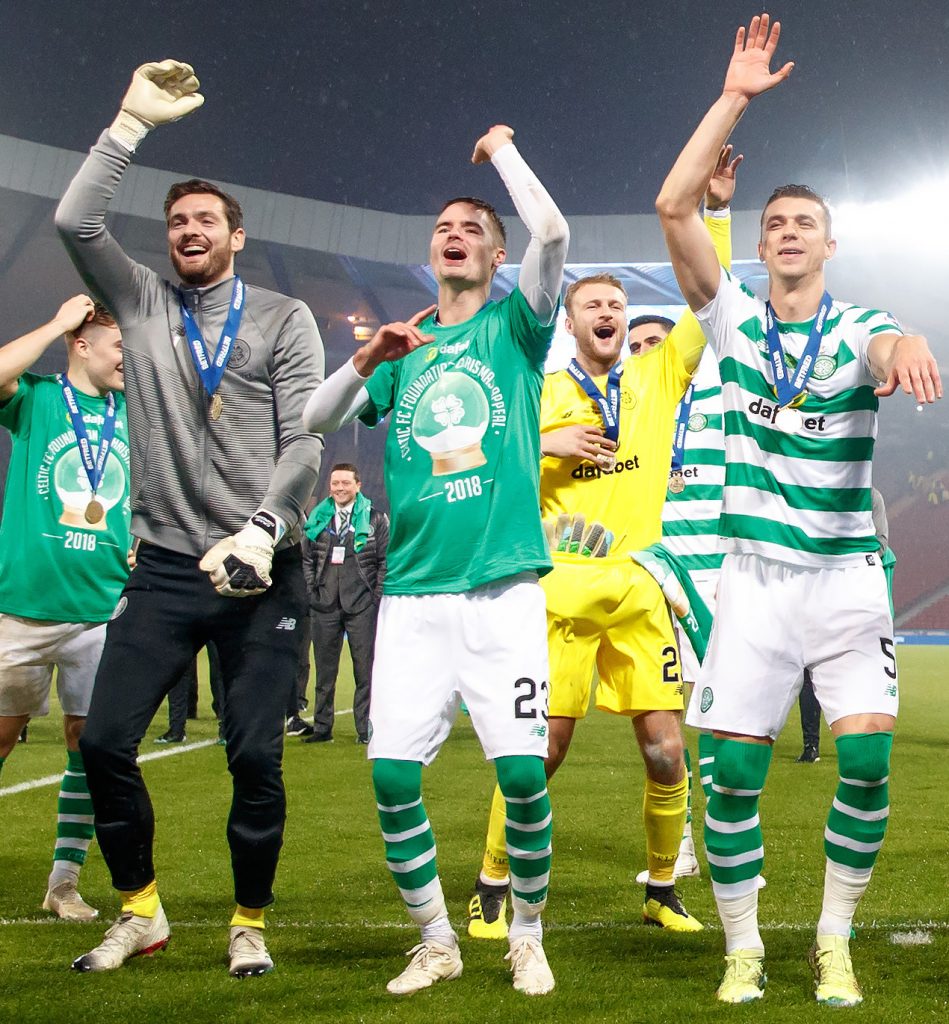 As a youngster, he was rejected by the Dons and said: “It’s amazing. I’ve come full circle. We beat Aberdeen in the League Cup Final and now we have secured the league title at Pittodrie.

“When I first signed, the dream was to play one game and it’s funny how football works. I managed to win the title against the team that let me go as a young lad and told me I wasn’t good enough to play for them.

“If they are willing to do the dirty work, do the hard work, they can come up trumps.

“Celtic is a fantastic club to be a part of and it’s amazing to be at the pinnacle of Scottish football.”