JEREMY TOLJAN is convinced Celtic have the players to pull off a miracle in the Mestalla tomorrow night.

Brendan Rodgers’ side are trailing by two goals from last week’s first leg at Parkhead as they prepare to take on Valencia in the Europa League last-32 return tie.

Marcelino, the Spanish team’s Head Coach, admitted it “would take a huge error from us” for the Hoops to turn things around in the away leg, as CQN reported last week.

However, right-back Toljan, on loan from Borussia Dortmund for the remainder of the campaign, doesn’t think the Scottish champions should be written off.

He said: “It will be my first time in that stadium and it would be a big result if we could somehow could go through.

“As we say in Germany, ‘hope never dies’, so we’ll go there with the right attitude and try to beat them. Miracles happen.

“We have forwards such as James Forrest, Oliver Burke and Scott Sinclair, who are very quick. They have also proved they can score goals, so I hope we can create the opportunities for them in Spain.”

Toljan looked at tomorrow evening’s opponents and said: “They might think they are already through, but we can maybe get inside their heads with a good start. 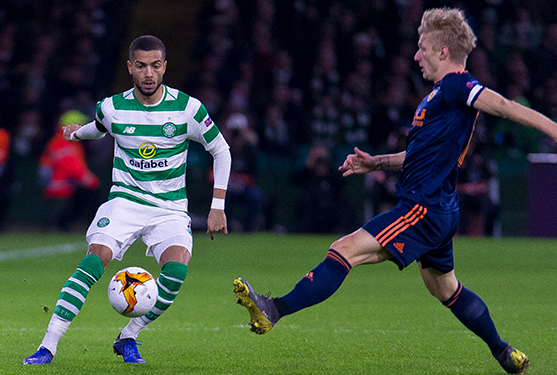 ON THE RUN…Jeremy Toljan fires in a cross against Valencia at Parkhead.

“We started last week’s very well, but if you make basic mistakes at this level then it can cost you. In Spain, we need to cut out the errors and also improve our play.

“I genuinely believe we can score against them and with a little bit of luck we can turn the tables on them.

“Our game plan was fine last week and we were good for the opening 20 minutes and we could even have opened the scoring.

“But mistakes against a side as good as they were will cost you the game. It was an open game, but they didn’t cut us open or have many chances.

“However, if we score first at the Mestalla then we will see what happens. If we can do that maybe that will affect them mentally and they will start to think about what might happen next because you never know in football.

“I haven’t been in the position before where my team was able to turn things round after a first result like this one, but maybe this is the time.”

Toljan is likely to get the nod over Mikael Lustig to start the must-win encounter against the Spanish aces.

After making his debut as a second-half substitute for the injured Swedish international in the 2-0 Premiership victory over St Johnstone in Perth at the start of the month, the former German Under-21 full-back has kept the position for the past four games, including the dramatic 1-0 triumph over Kilmarnock at Rugby Park on Sunday.