Celtic Quick News on News Now
You are at:Home»Football Matters»MJALLBY & LIONS PRAISE FORREST
By CQN Magazine on 14th August 2015 Football Matters
JOHAN MJALLBY has admitted Bolton would jump at the chance of signing Celtic winger James Forrest.
The Hoops star has been linked with a reunion with ex-gaffer Neil Lennon and Mjallby at the Championship side in the past.
Former assistant boss Mjallby, who watched Forrest play in the 2-2 draw with Kilmarnock in midweek, said: “Yes, of course, I would love to see Forrest at Bolton.
“James is a terrific player and I really like him. He’s an old-fashioned winger who can go inside and outside when he’s running with the ball.
“He’s explosive when he is on form and taking on defenders. I thought he was brilliant against Kilmarnock.”
Lennon and Mjallby are searching for recruits after watching their side get knocked out of the League Cup by Burton Albion on Tuesday.
Although the Swede would welcome the Scottish international, he conceded: “I know it’s not going to happen.” 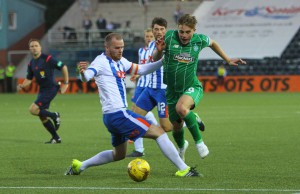 The ex-Hoops double-act have been told there is little cash to strengthen the team and they have been told to seach for bargains in the current transfer window.
Lisbon Lion Willie Wallace had previously come to the defence of James Forrest, stating that the player was very highly regarded by both himself and other Lisbon Lions including Bertie Auld and John Clark.
Forrest had his best game in quite a while against Kilmarnock and at times during the match he was unplayable. Celtic manager Ronny Deila withdrew him with the crucial European challenges ahead.
If James Forrest can re-produce Wednesday’s form at Rugby Park against Malmo then he could be crucial in getting Celtic to the Champions League group stages. And it wouldn’t be the first time he’s done that!