Celtic Quick News on News Now
You are at:Home»Latest News»MOI REVEALS WHAT HE SAID TO LENNON AT HALF-TIME
By CQN Magazine on 8th November 2020 Latest News

MOHAMED ELYOUNOUSSI moved on to the Perfect Ten as his magnificent hat-trick in the 4-1 win over Motherwell at Fir Park this afternoon took him into double figures.

The Norwegian international forward was unstoppable and completed his terrific trio with a soaring leap and thunderous header that hurtled past  the helpless Aaron Chapman in the Well goal.

Elyounoussi eased the pressure on both Neil Lennon and the champions with two expertly-struck efforts in the first-half in a game where the Hoops knew defeat was unthinkable against a side who had won four of their last five Premiership outings.

The on-loan Southampton left-sided raider, speaking to Celtic TV, admitted: “I didn’t realise I was at 10 goals. I just focus on the next one and the next game and then, in the end, see what the number is.

”However, I am delighted and I’m very pleased that we had a good game, as well, to get the win and the three points.

“I was disappointed not to get the hat-trick against Lille, but today I said to the manager, after getting the two goals, that I was going to go for the third and take the ball home. I’m obviously pleased with that and also to help the team get the three points. 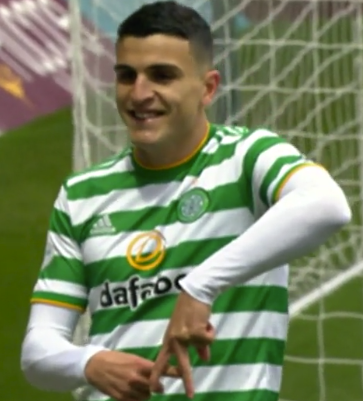 “Now it’s just up to us to keep that momentum going.”

A beaming Elyounoussi, who will now be heading for international duty with Norway, revealed he has a special prized gift for his daughter Amina.

He added: “Yes, my daughter is getting the match ball, definitely. She was watching the game from home, so, hopefully, she was proud!

“We can go away now, get some wins with our national teams, stay healthy with no injuries and then come back here and go on from there.”

The next Premiership challenge for the Hoops will be against Hibs at Easter Road in 13 days’ time.

The last time they played in Leith was September last year where it took a header from Ryan Christie to give the side a 1-1 draw. One point will not be enough for Elyounoussi this time around.