CELTIC teenage left-back Adam Montgomery is on his way to St Johnstone on a six-month loan.

The attack-minded defender spent the second half of the previous campaign at Aberdeen on a temporary transfer before returning to the Hoops this summer.

Montgomery, who made 15 appearances for Ange Postecoglou before heading to Pittodrie, turned out eight times for the north-east club and will be welcomed to McDiarmid Park by boss Callum Davidson who is looking to strengthen his depleted squad after their relegation scare last term, according to the Glasgow Times. 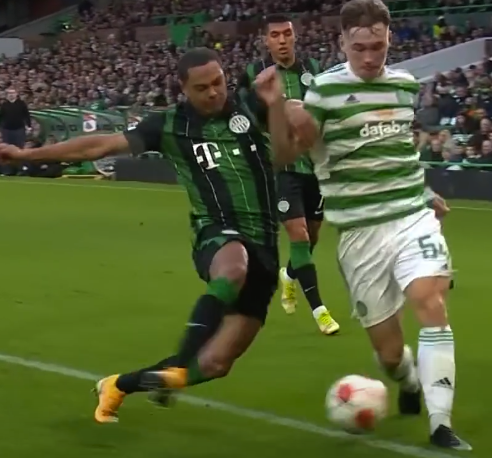 ON THE RUN…Adam Montgomery in full flight during Celtic’s 2-0 win over Ferencvaros at Parkhead in October.

While the 19-year-old converted midfielder prepares for his stint in Perth, the Hoops have been linked with Motherwell’s highly-rated youngster Bailey Rice, the Fir Park club’s Scotland Under-17 utility performer.

The left-sided defensive midfielder will be 16 on October 4 and become eligible to sign professional forms, as reported in the Daily Record.

Other clubs on both sides of the border are monitoring Rice’s situation, but the champions are one of the first in to register their intentions.