Celtic Quick News on News Now
You are at:Home»Latest News»MORE GRIEF FOR GRIFF
By CQN Magazine on 4th May 2022 Latest News

LEIGH GRIFFITHS will be on the look-out for his FOURTH club in a year before the new season kicks off.

The former Celtic striker, who claimed 123 goals in his eight years at Parkhead, is leaving Falkirk at the end of his short-term contract.

Thirty-one-year-old Griffiths was brought to the League One outfit in January after his loan deal at Dundee was cut short.

The one-time Scotland international frontman headed back to the Hoops, but the remaining six months of his terms were paid up to set him free. 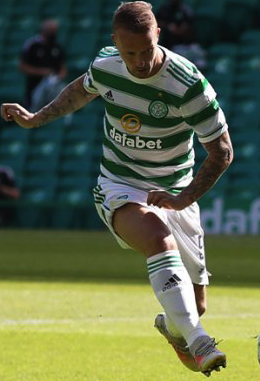 LAST KICK AT THE BALL…Leigh Griffiths in action in the pre-season game against West Ham which turned out to be his final appearance for Celtic.

Falkirk offered Griffiths almost £1,500 a week to revive their promotion bid for the Championship, according to a report in the Scottish Sun.

However, the former Livingston, Dundee and Wolves hitman, who also had two temporary stints at Hibs, scored only two goals in 13 appearances with the club unable to reach the promotion play-off places as they finished sixth – seven points behind fourth-placed Queen’s Park.

His departure is one of 14 player exits from the club who are ready to bring in John McGlynn who will be quitting Raith Rovers. Martin Rennie and former Celtic and Ibrox frontman Kenny Miller, who took over in December following Paul Sheerin’s dismissal, are also on their way.