CONTROVERSIAL Colombian striker Alfredo Morelos has been branded “a cheat”.

The Ibrox attacker was on the receiving end of an astonishing verbal volley from former Scotland international Alan Brazil following his antics in Celtic’s 1-0 triumph in the Betfred League Cup Final at Hampden yesterday.

Morelos, who was red-carded a record five times last season, failed to score against the Hoops for the ELEVENTH game and compounded his misery with a penalty-kick miss in the 63rd minute when Fraser Forster dived to his right to beat away his effort.

Brazil, speaking on talkSPORT, was clearly unimpressed by the frontman who won the spot-kick award following a challenge from Jeremie Frimpong who was ordered off by Willie Collum. The Dutch teen ace became the second Celt to be dismissed by the same official in a couple of months following Ryan Christie’s expulsion against Livingston. 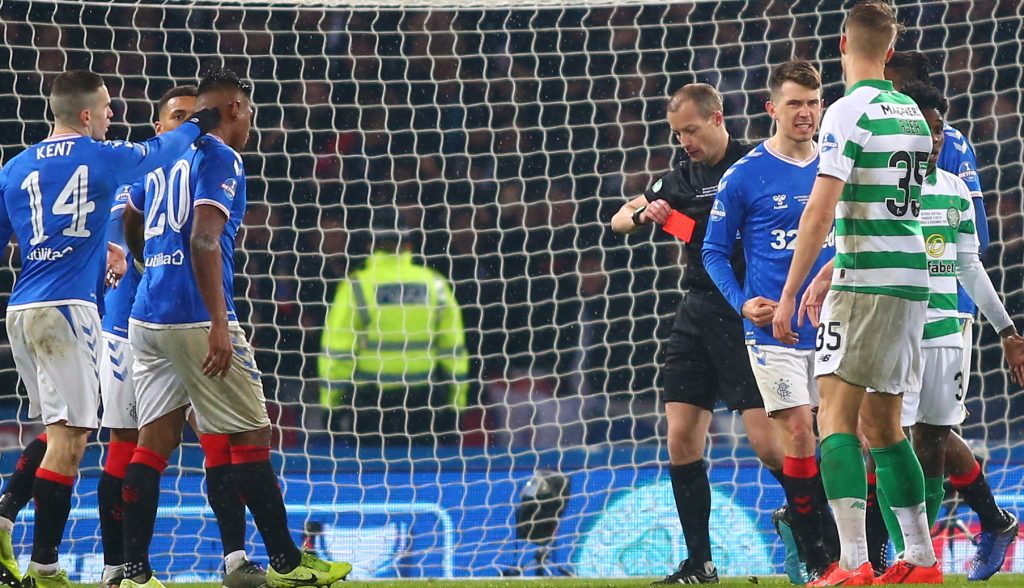 SEEING RED…Jeremie Frimpong is dismissed by referee Willie Collum as Alfredo Morelos gets ready to take the resultant penalty-kick.

OOPS AND WHOOPS…Fraser Forster dives to save the Colombian’s spot-kick effort.

Reflecting on events at the national stadium where Neil Lennon led his team to their tenth successive domestic honour, the radio host said: “The young boy that got sent off, I thought he was Celtic’s best player so he was delighted after it. Running around with the trophy in the air.

“Ally (McCoist) was there and I’m sure he’ll agree with me that Rangers had to capitalise on having so much possession but Morelos? He does my head in.

“I know Ally likes him as a player, but you talk about someone, his middle name is Lionel. Honestly. He’s always on the deck.”

Asked if the forward was just trying to win things, Brazil answered: “No, He’s a cheat. Simple as that. He falls over too easy. He’s a good player, but he’s got to stop cheating.”

Morelos searched in vain for an earlier spot-kick against the champions and collapsed theatrically after Scott Brown had challenged for a bouncing ball in the box.

On this occasion, match official Collum wasn’t impressed and waved play on.

And Morelos escaped a straight red card when he raked the Achilles heel of matchwinner Christopher Jullien late in the game. Retrospective action may yet be taken by the SFA Referee disciplinary committee..