WE are only 12 days into 2019 and we’ve already seen what is surely a candidate for most preposterous quote of the year.

Mark Allen, who is a director of football at Ibrox, has called for Alfredo Morelos to be given more protection from referees.

He is quoted as saying: “We need to look after Morelos better. He’s a very talented young man, he is living thousands of miles away from home and is still only 22.”

Allen added: “I watch every Rangers game and sometimes Alfredo just needs a little bit more protection, because people tend to see the things they want to see in terms of, ‘This is what Morelos has supposedly done’. They don’t actually see what has been done to Morelos and I think we have to very mindful of that with Alfredo, because he is a very talented boy.

“For the record, I am not referring to the last Old Firm game. What I am saying saying it is throughout the course of this season, and what I saw last season, everyone is quick to jump on the bandwagon.

“But they don’t look at what happens to Alfredo on the pitch and if he is getting protected.

“Is he getting the right protection from the officials in every game? That is the point I am making and we need to be mindful of that.

“We rate Morelos very highly, but sometimes he gets bad publicity through no fault of his own.”

It’s not April 1 yet, so you don’t need to check your calendar. Did Allan have a straight face when he uttered those lines? Are we talking about the same Alfredo Morelos? 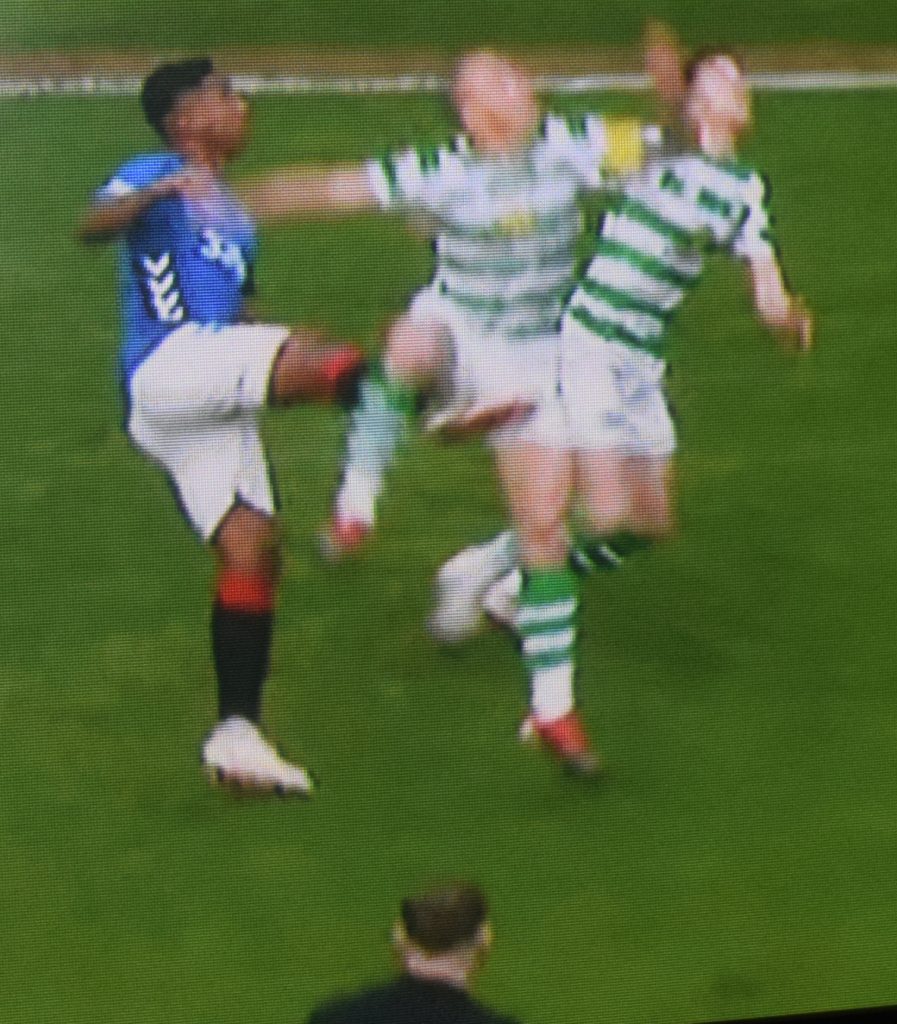 OUCH…Alfredo Morelos connects with Scott Brown while referee John Beaton gets a good view of the incident.

Allen states he sees every game, so presumably he was in Govan on December 29 when the Colombian stormed around with a full head of steam and somehow managed to escape a solitary word of caution from referee John Beaton.

Even if the whistler didn’t reckon three flashpoint incidents with three different Celtic players warranted action, millions disagreed after watching TV footage. Morelos clearly kicked Scott Brown in a painful area with the ball already yards from the scene. He grabbed Ryan Christie in a private area and, even worse, stamped on the grounded Anthony Ralston on the touchline with the ball out of play.

As Chris Sutton so eloquently put it in CQN yesterday: “You can’t kick someone in the nuts, you can’t grab someone’s nuts and you can’t trample over somebody.”

Allen must also have missed Morelos’ kick at Scott McKenna at Pittodrie at the start of the season. It merited a straight red card which, fairly astonishingly, was downgraded to a yellow.

There was no such safety net for the player following his assault on Graeme Shinnie when the Dons won 1-0 in Glasgow on December 5.  .

The red card in Europe never had a chance of being rescinded. And we haven’t even got around to discussing the THIRTEEN yellow cards.

Alfredo di Stefano was known as ‘The White Arrow’, Pele was ‘The Black Pearl’, Ferenc Pukas was ‘The Galloping Major’, Franz Beckenbauer was ‘Der Kaiser’, Denis Law was ‘The King’ followed by Kenny Dalglish as ‘King Kenny’. And our own Paul McStay was, of course, ‘The Maestro’.

And what sort of nickname has Morelos earned? What moniker graces this player? What accolade has he been afforded by adoring fans?

Says it all, doesn’t it?