Celtic Quick News on News Now
You are at:Home»Latest News»‘MORELOS SHOULD BE LOOKING AT FIVE GAMES,’ EX-HOOPS HERO CALLS FOR BAN
By CQN Magazine on 31st December 2019 Latest News

The striker was red-carded for the SEVENTH time in his Ibrox career with a theatrical and obvious dive in stoppage-time as he tried to con referee Kevin Clancy into awarding the visitors a penalty-kick.

Steven Gerrard’s side were already on their way to a 2-1 victory and their first win at Parkhead since 2010 when the blatant incident occurred.

The match official had already booked the volatile frontman for a foul of Hoops skipper Scott Brown and had no alternative but to flash a second yellow card at the player.

Sutton, speaking in the Daily Record, said: “Alfredo Morelos is supposed to be a changed man, but old habits seem to die hard for the Rangers striker.

“His stupidity in the final minute at Celtic Park at the weekend might have got lost in the wash in the wake of the win. But his behaviour could have severe consequences. It could cost Rangers the league.

“Morelos will get a two-game  suspension for his nonsense – but he should be clobbered with an even bigger ban for his throat-cutting gestures to the crowd.

“The rules are there to stop this kind of thing and Morelos simply can’t be allowed to make those types of signs to supporters.

“The SFA would be a laughing stock if they don’t take action as what kind of message does this send out? That it’s okay to make violent gestures?

“Neil Lennon copped a three-game ban for doing an aeroplane celebration, for goodness sake. Tell me what is worse?

“Morelos should be looking at FIVE games – at least. 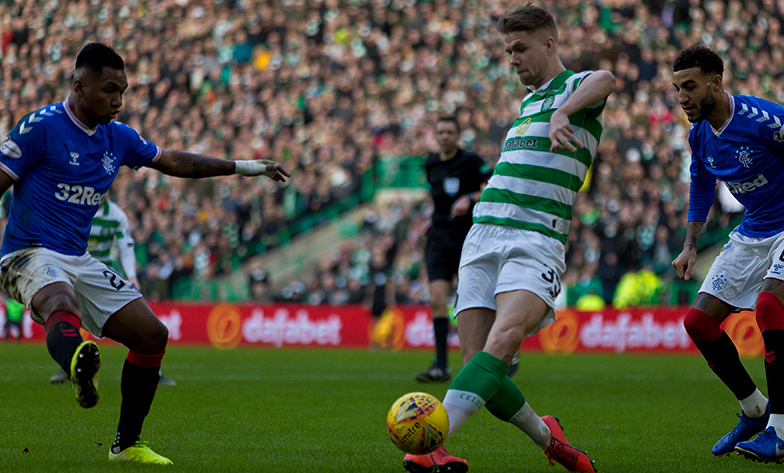 ON THE BALL…Kristoffer Ajer clears from Alfredo Morelos with Connor Goldson looking on.

“I’m all for a bit of banter with the crowd, but there is a line which Morelos crossed. The police are constantly banging on dressing room doors warning about this kind of stuff in derby matches.

“The SFA have to act otherwise they will be guilty of inconsistency. Football authorities are trying to clamp down on flashpoints that incite crowds and this falls under that bracket.

“I’m not buying the Rangers defence he was signalling the game was over. That is a different kind of gesture and don’t give us the excuse it’s common in South America.

“Morelos has been in Scotland long enough to know better. And Rangers should be taking more responsibility for his actions rather than defending them. It was a silly end to an impressive performance. He should have scored, but gave the Celtic defence all kinds of trouble.

“The dive late on was totally daft as the game was already won.

“It shows his temperament still needs a lot of work and his reaction on the way off only compounded it. He will now miss two games in the Premiership, with the threat of a couple more, and that could be huge for Rangers.

“The striker has been one of the best performers in the country this season and is absolutely vital to his side.”

Former Scotland star, speaking on talkSPORT yesterday, branded Morelos “a clown” for his actions, as reported in CQN.

It’s the second time in two seasons he has been dismissed against the champions following an off-the-ball assault on captain Brown when James Forrest hit the winner in a 2-1 triumph in March.

Sutton, now a media pundit, added: “We are talking about fine margins because Rangers look well equipped to go the distance now. I don’t quite get the wild celebrations from Steven Gerrard and his bench at the end of Sunday’s win, though.

“It was a bit embarrassing, to be honest, with only half of the season gone, but I’ve thought the same thing when Celtic have gone over the top after they’ve come out on top.

“There’s an awful lot of football still to be played, but everyone at Parkhead now must realise they are in a race.”

* HAPPY New Year when it arrives, folks! The CQN team wishes all our readers a healthy and prosperous 2020. Have a good one and we’ll see you tomorrow!