CELTIC misfired as they drew their third blank of the league season while stumbling through 90 frustrating minutes at Fir Park this afternoon.

Well were left with 10 men following the 41st-minute dismissal of Cedric Kipre after an incident with Scott Brown.

Remarkably, the same player was red-carded by the same referee, Craig Thomson, against the same opponents during the Hoops’ League Cup Final triumph in November.

The defender launched into a clattering challenge on the Celtic captain which left both combatants on the turf. There was a push by Brown and a petulant kick from Kipre. The match official saw the movement and immediately banished the Frenchman.

Clearly, the home side reckoned the referee’s decision had been harsh and Brown was booed by the Well support for the remainder of the confrontation. 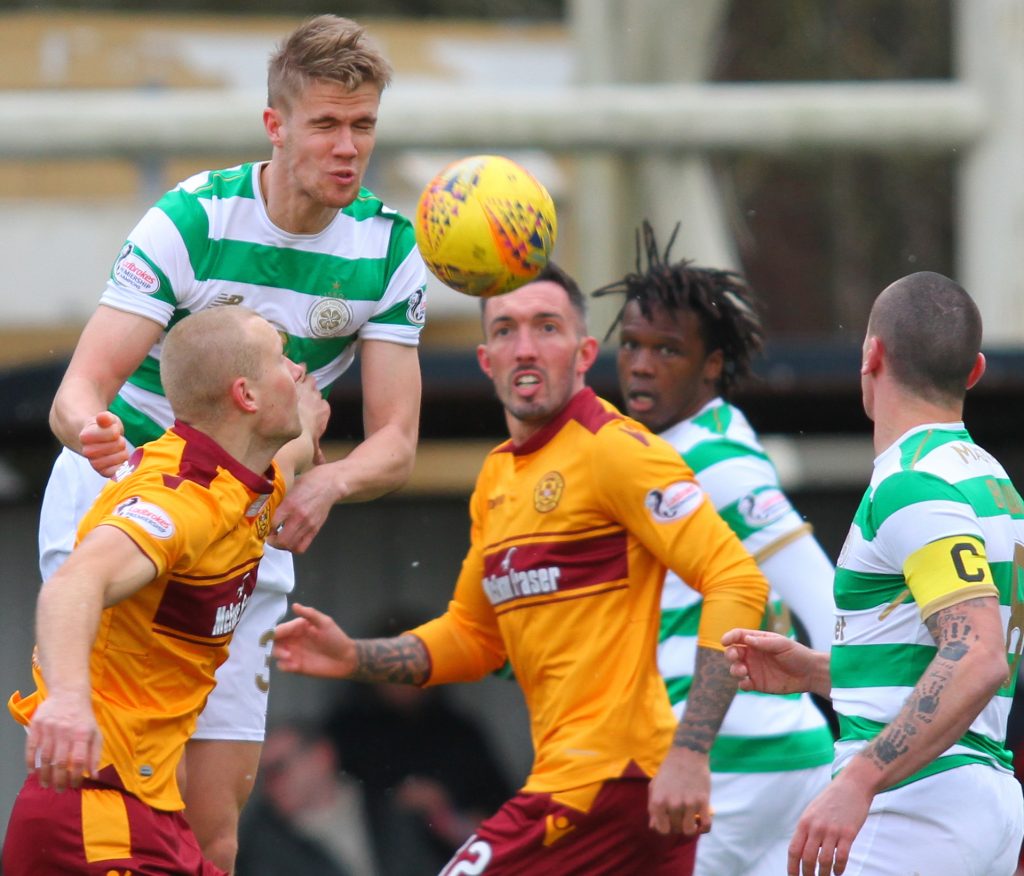 UP AND AT ‘EM…Kristoffer Ajer puts pressure on Motherwell duo Curtis Main and Ryan Bowman as Dedryck Boyata and Scott Brown look on.

Brendan Rodgers’ side, though, just never took advantage of the extra man. They had their opportunities to score, but simply couldn’t break down a formidable barrier that blocked their way to Trevor Carson’s goal.

On the one occasion he was left flapping the woodwork came to his rescure.

Patrick Roberts, on as a second-half substitute for James Forrest for his first appearance since November, drifted past two tackles as he came in from the right in the 82nd minute.

Suddenly, he lashed a wicked curling left-foot drive from 25 yards that left the keeper stranded, but the ball clipped the crossbar before flying off to safety.

That was just one of many chances the champions had to make certain all three points were taken back to the east end of Glasgow.

But it was a day where there was a lack of a killer touch and Stephen Robinson’s team, like Hearts and Kilmarnock before them, got to the end of the 90 minutes with their goal intact to prise an unlikely point from the largely one-sided confrontation.

Unfortunately, on this occasion, there were precious little signs of sparks of ingenuity that would break the barrier.

Scott Sinclair and Stuart Armstrong were thrown on for Odsonne Edouard and Olivier Ntcham on the hour mark, but to no avail.

Celtic were first to threaten in the third minute when a sweeping move down the right involving Jack Hendry, Forrest and Edouard saw the ball land at the feet of Ntcham just outside the box, but his finish didn’t match the slick build-up and his effort flew waywardly over the bar. 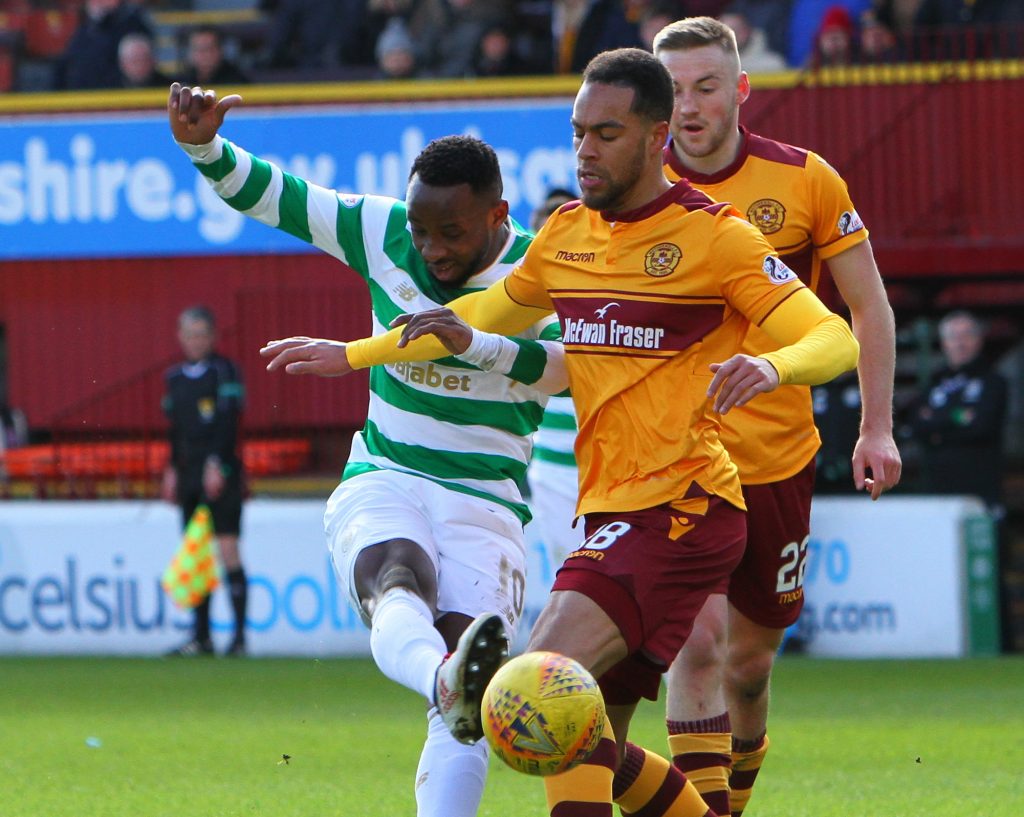 NO WAY THROUGH…Moussa Dembele has a go at goal without any joy.

Eight minutes later, Ntcham was shown a yellow card following a foul on Chris Cadden as he attemped to haul the Well winger back as he raced past him.

Moments afterwards, Kristoffer Ajer was slack with a pass out of defence that fell to Kipre who knocked the ball to Cadden who thundered a drive at goal, but it lacked the precision to bother Scott Bain.

The on-loan keeper was being kept busy and he had to dive full-length to his left to bundle away a header from Curtis Main who had sneaked in behind Dedryck Boyata to get on the end of a
left-wing delivery.

Carl McHugh was next into the book after a bad challenge on Edouard as the game became exceptionally competitive in the middle of the park.

Ryan Bowman zipped in a drive in the 19th minute which was parried by the confident-looking Bain, playing only his second game for the club after last week’s impressive debut at Ibrox.

In the 21st minute, Kipre missed a right-wing corner-kick from Ntcham that fell at the feet of Hendry. The makeshift right-back was so taken by surprise at the gift, he sclaffed the ball wide of the target.

Sixty seconds later, Rogic swept a left-wing effort past the post and then Ajer had to clear up a crazy clearance from Boyata that posed a threat for Bain.

The keeper had to look alert a few moments later when he  dived spectacularly to his right to beat away a vicious 25-yard free-kick from Curtis Main.

Carson emulated that save as he got down to parry a Forrest effort and Bain had to look lively when a right-wing cross from Cadden swerved towards his right-hand corner of the net. He did well to tip over. 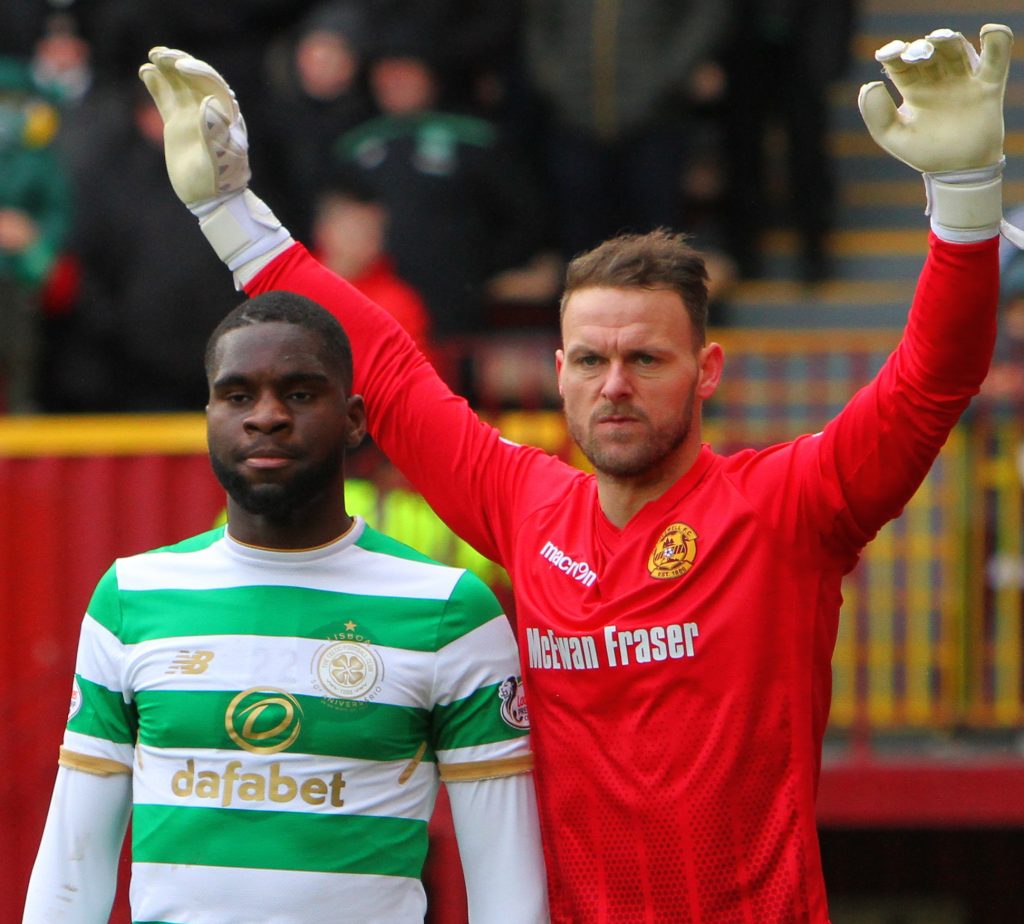 Main and Bowman were charging around as they attempted to unsettle Ajer and Boyata and the 19-year-old Norwegian looked to be handling the situation better than the somewhat erratic Belgian.

It must also be said the Motherwell front duo are to football expertise what Mike Tyson is to poetry recital. The Fir Parkers rely heavily on their physicality and raw meat is the order of the day with these guys around.

Celtic were failing to spark and Kieran Tierney’s enforced absence upset the balance of the left side although Callum McGregor tried hard to compensate. However, the midfielder will never be famous for his bone-shuddering tackles.

Forrest was first to show in the second-half when he hit a low drive towards goal with the outside of his boot, but Carson got down to his right to hold on.

Rodgers had to change things and add width to the team and introduced Sinclair and then Roberts. 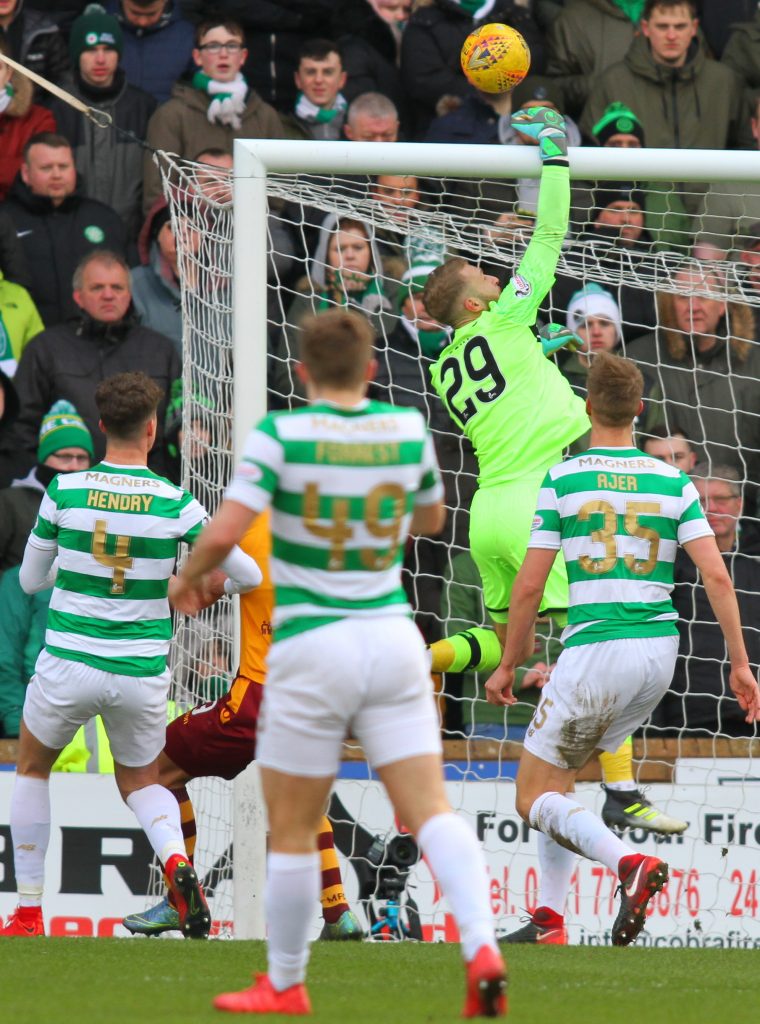 Just before their introduction, Rogic, who put in a power of work, had two efforts repelled in the space of a minute. The Aussie latched on to misplaced pass from McHugh and raced towards goal, but his shot was blasted against the chest of Carson at the expense of a corner-kick.

The ball dropped to him in the box from the set-play, but his ferocious right-foot drive was magnificently punched away by the keeper.

Celtic kept plugging away with little signs of the inspirational flash that would get the reward of an opening goal.

Roberts clipped the top of the bar and then Armstrong left Carson swiping at fresh air as his angled drive zipped wide of the left-hand upright.

In the 88th minute, Sinclair was presented with a golden opportunity when he broke away and looked to be ready to pull the trigger.

However, Richard Tait somehow got back to throw a leg at the ball and divert the shot for a corner-kick. It should have been a goal.

In the fading moments, Rogic curled an inviting right-wing cross into the packed penalty area and Moussa Dembele saw his header touched over by Carson.

And with that went the champions’ hopes of a victory.

Now they need 13 points from their remaining fixtures to claim their seventh successive title.

No-one is going to bet against them.