Celtic Quick News on News Now
You are at:Home»Match Report»MOTHERWELL 0 CELTIC 4: CHAMPS TO THE FOUR WITH ODSONNE AT THE DOUBLE – AGAIN
By CQN Magazine on 5th February 2020 Match Report

IRREPRESSIBLE Odsonne Edouard netted an exquisite free-kick to put the stamp of approval on Celtic’s fifth successive Premiership triumph since they returned to action.

The champions were already leading 3-0 after the Frenchman had opened the scoring in the ninth minute and Leigh Griffiths and Callum McGregor had added others after the interval against a battling Motherwell at Fir Park this evening.

Substitute Ryan Christie was sent crashing 22 yards out following a cynical challenge from Declan Gallagher that earned the defender a yellow card in the 80th minute.

Edouard took stock of the situation, sauntered forward and hit a delightful right-foot deadball effort that arced over the defensive wall and ricocheted into the net off the right-hand post beyond the stranded Mark Gillespie who stood motionless on his line.

It was a thing of beauty as the Hoops continued their quest for nine in a row and maintained their seven-point advantage. It was also Edouard’s second successive double as his two-goal show against Hamilton Accies on Sunday. 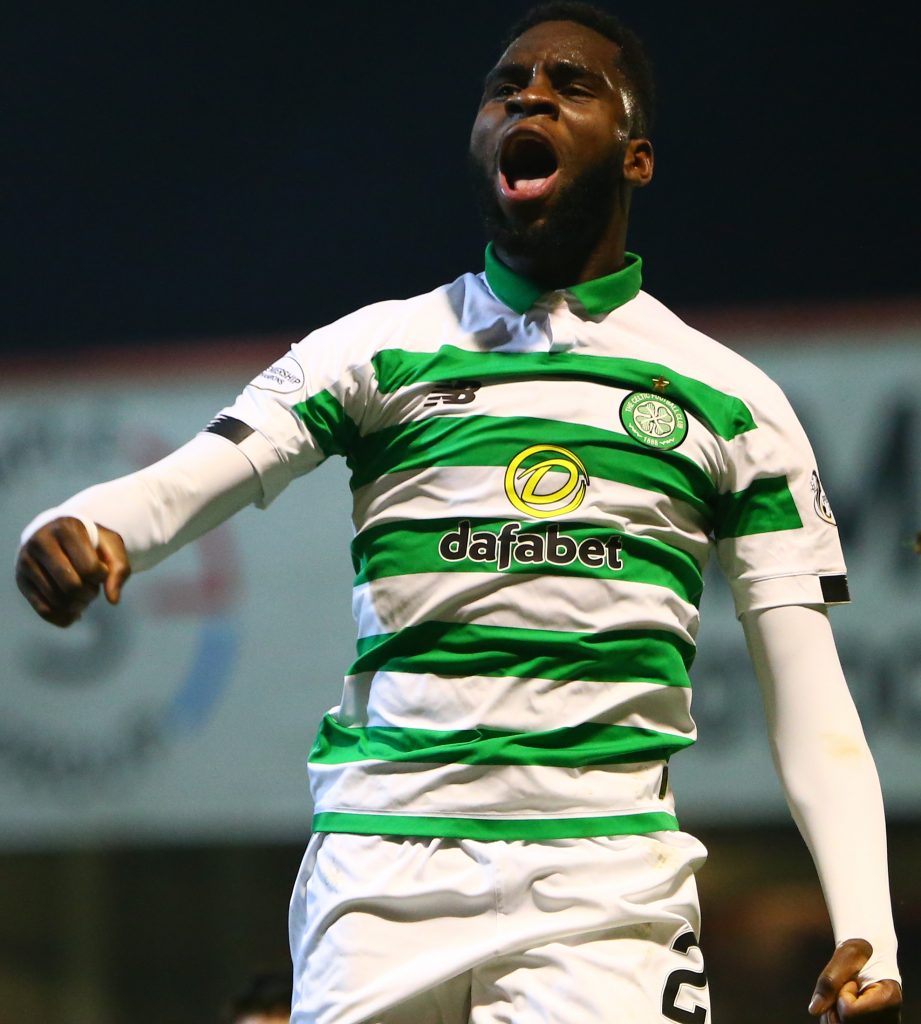 JUMPING FOR JOY…Odsonne Edouard celebrates his free-kick goal for No.4.

However, it must be admitted the Hoops lived dangerously in the opening 45 minutes and were happy to go in a goal to the good at the interval with another strike from that man Edouard in the ninth minute.

It was a neat piece of interchanging between the Frenchman and McGregor that conjured up the opening and the striker saw his first effort blocked by a frantic defender. However, he snapped onto the rebound to drill a right-foot drive low past the helpless Gillespie at the keeper’s right.

Two minutes later, Griffiths had a decent chance to double the visitors’ advantage after Jozo Simunovic and Olivier Ntcham had combined on the right to carve open the opportunity.

The midfielder swung in an inviting cross to the near post, but the comeback striker waywardly blazed a right-foot attempt over the crossbar. He acknowledged he should at least have hit the target from 10 yards.

In between the strike and the miss, Well almost snatched a quickfire equaliser when their on-loan Newcastle winger Rolando Aarons left Kristoffer Ajer floundering with a neat twist and turn, but Alan Campbell fired wide from an angle with Fraser Forster exposed. 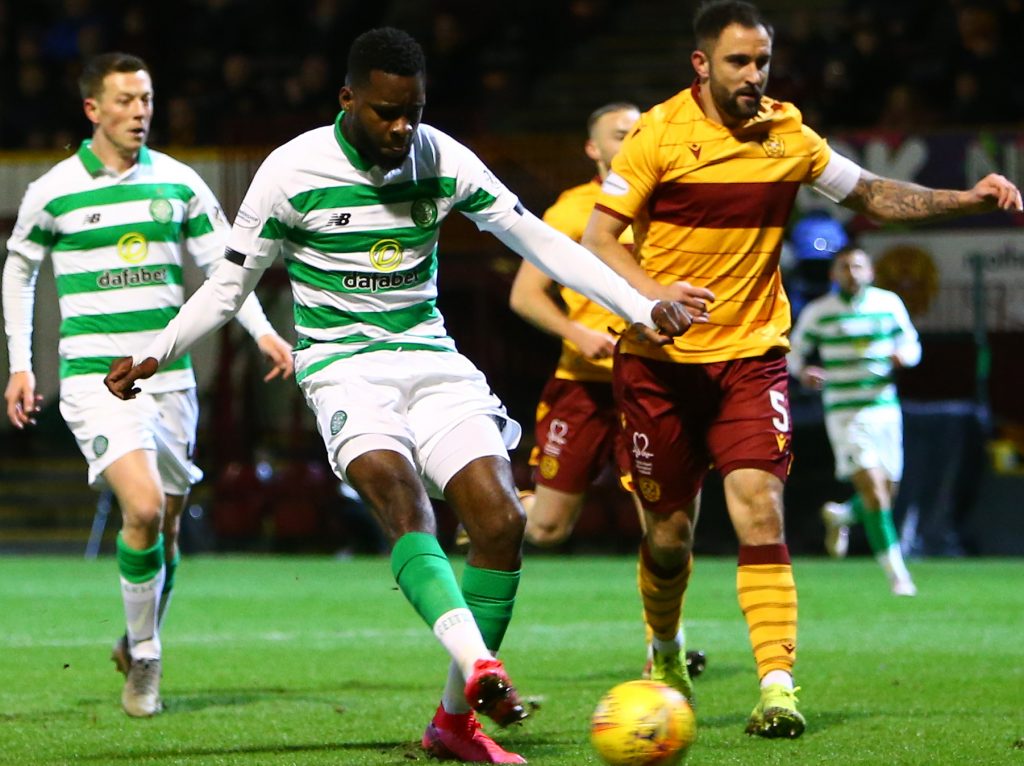 NUMBER ONE…Odsonne Edouard slides in the opener in the ninth minute. 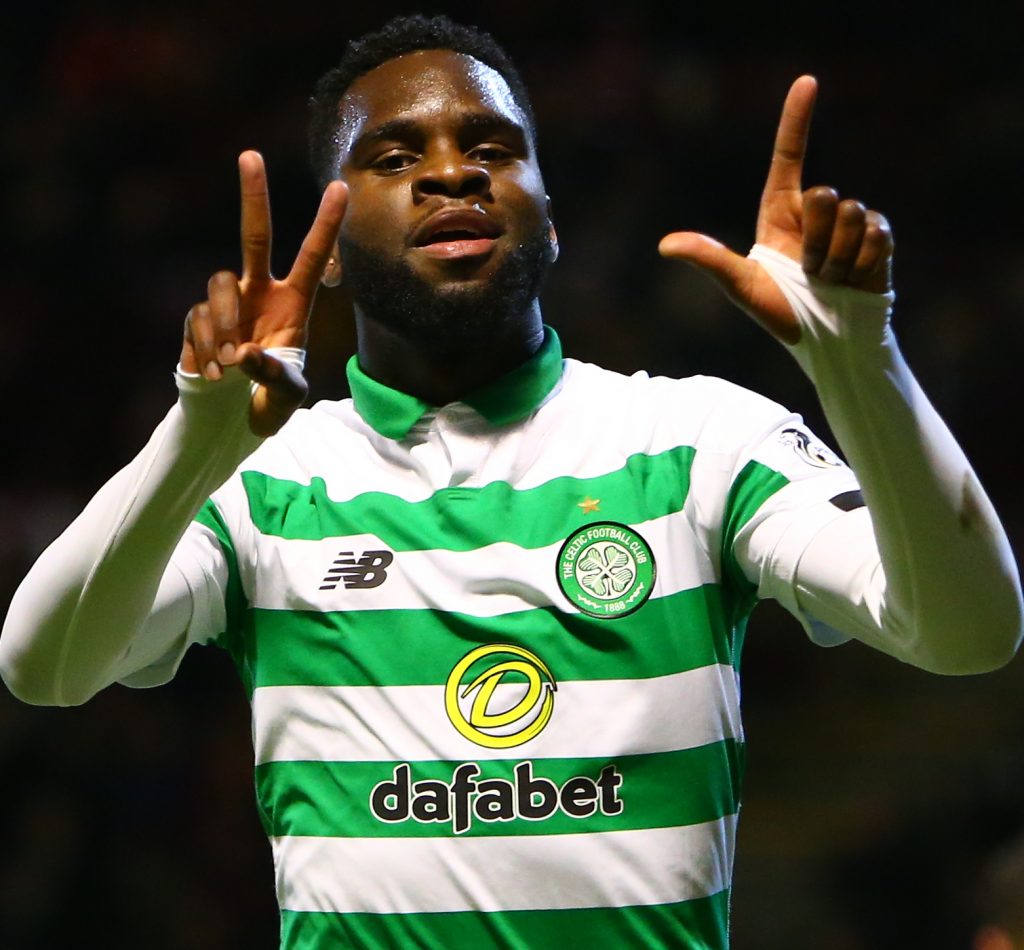 HAND IT TO HIM…Edouard turns away in triumph.

The Norwegian didn’t look comfortable in the first-half and was often sloppy in possession and his passing wasn’t as crisp or as accurate as Neil Lennon would have demanded.

Having said that, the skyscraper defender had a chance to grab a second goal in the 17th minute when Griffiths swung in a left-wing free-kick.

Ajer rose high above everyone to get his head to the ball, but, unfortunately, his effort lacked direction and flew yards over the crossbar.

Edouard wasn’t lacking in company during the game and central defender Gallagher was never far from him no matter where he roamed. And the Scotland international wasn’t slow to let his opponent kow he was around, either.

The centre-back received a word of caution from referee Don Robertson for a dangerous tackle from behind on Griffiths that sent the frontman crashing to the turf.

Just before the 30-minute, Liam Polworth had far too much room on the left to race clear into the box before trying to set up Aarons.

The new boy was penalised for a high boot on Greg Taylor, but it was still a warning sign for the Hoops with his effort clipping Forster’s right-hand upright. 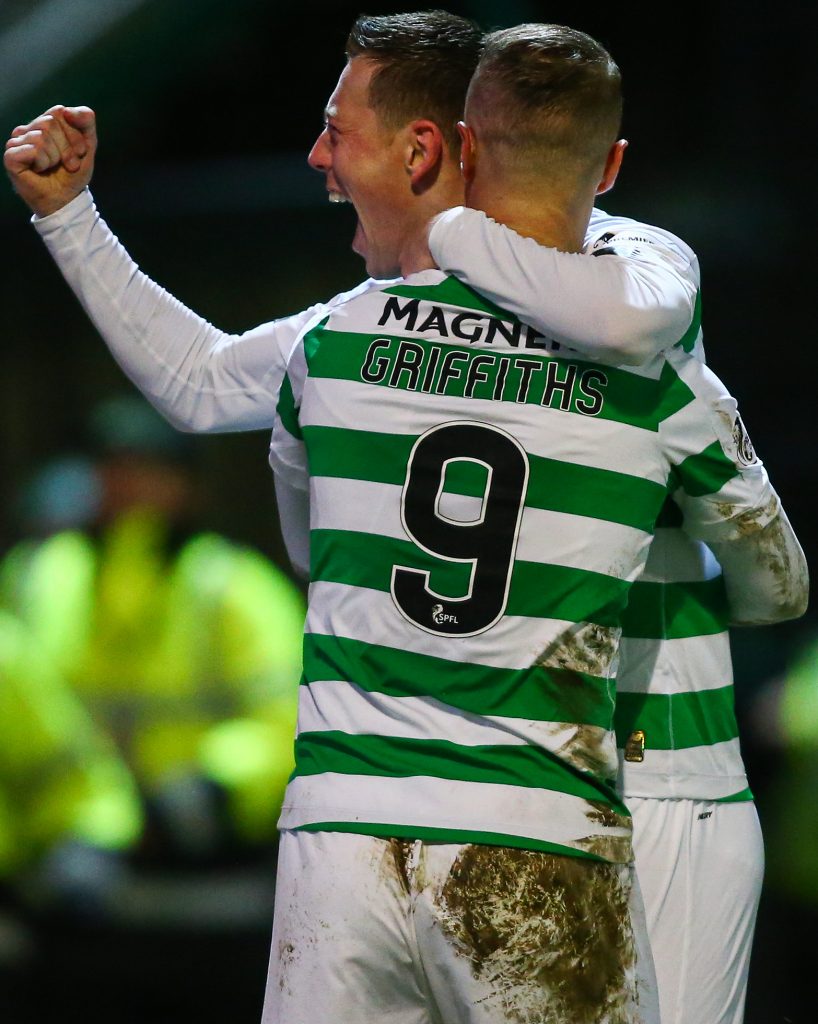 In the 32nd minute, the keeper had to react with lightning reflexes to dive to his right to hold a flashing 20-yarder from Jermaine Hylton that looked destined for the bottom corner of his net.

Ajer again created alarm with a dreadfully short pass to Taylor that was intercepted by Aarons, but Christopher Jullien bailed out his struggling team-mate with a timely intervention to boot the ball clear.

A minute before the interval, Forster denied the all-action Aarons an equaliser when he stood tall to block an angled shot at his right-hand post.

Six minutes after the turnaround, Griffiths gave the visitors some breathing space with the second goal after an exhilarating 40-yard run from McGregor on the left shredded the Well defence.

The playmaker refused to surrender possession to the stubborn Liam Donnelly before flashing a ball across the box and there was the prince of predators arriving right on cue to turn a left-foot effort into the net from seven yards.

Celtic then indulged in a bout of suicidal passing with Ntcham, Scott Brown and James Forrest all guilty of surrendering possession and Jullien compounded the sequence of errors by giving away a corner-kick for absolutely no good reason. 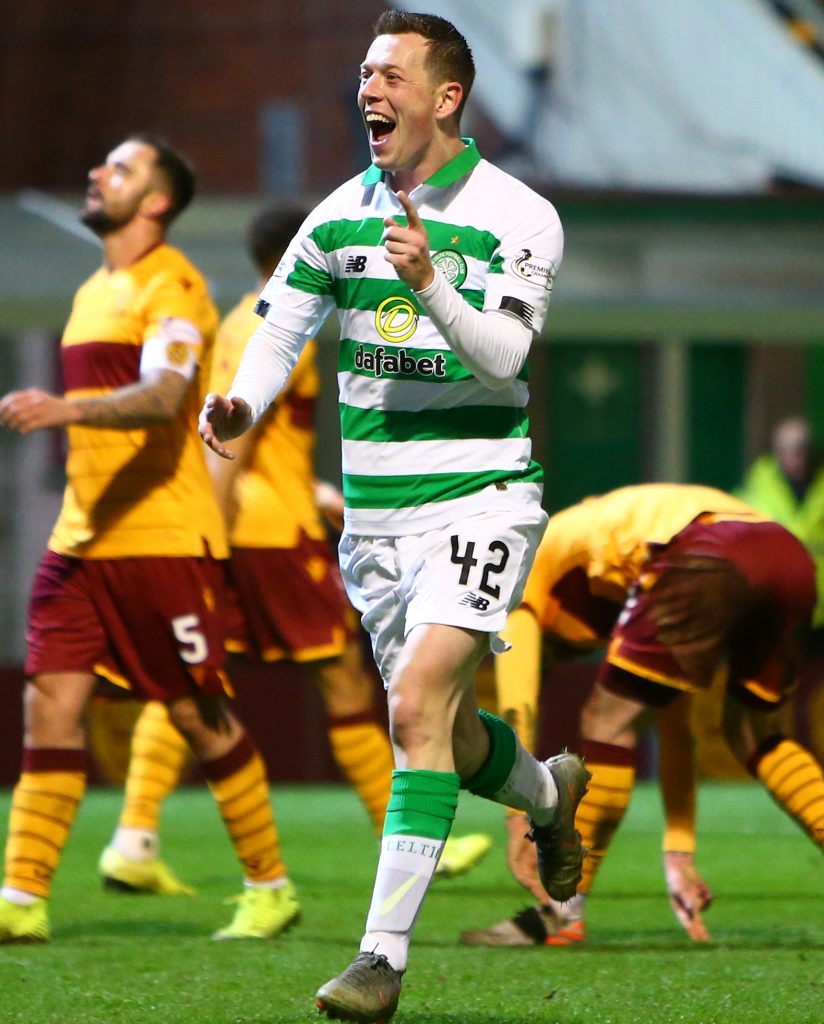 Thankfully, McGregor was not afflicted with the condition and the Scotland international looked a class act as he flitted across the surface, threading passes around with sublime timing and touch.

In the 61st minute, Griffiths blazed over from the edge of the box from a Taylor cross and he came closer moments later when he smashed a header against the crossbar after some wonderful work by Edouard on the left.

Two minutes later, Ntcham had a contender for Miss of the Season when he walloped recklessly over the bar from six yards after some brilliant leading-up work from Griffiths and Edouard.

In the 71st minute, Ryan Christie came on for Griffiths as Lennon gave his team a shake-up.

A third goal just had to come and McGregor was the man to provide it in the 75th minute with a magnificent strike. Christie and Forrest opened up the Well back lot with the winger cutting the ball back to the midfielder on the edge of the box. 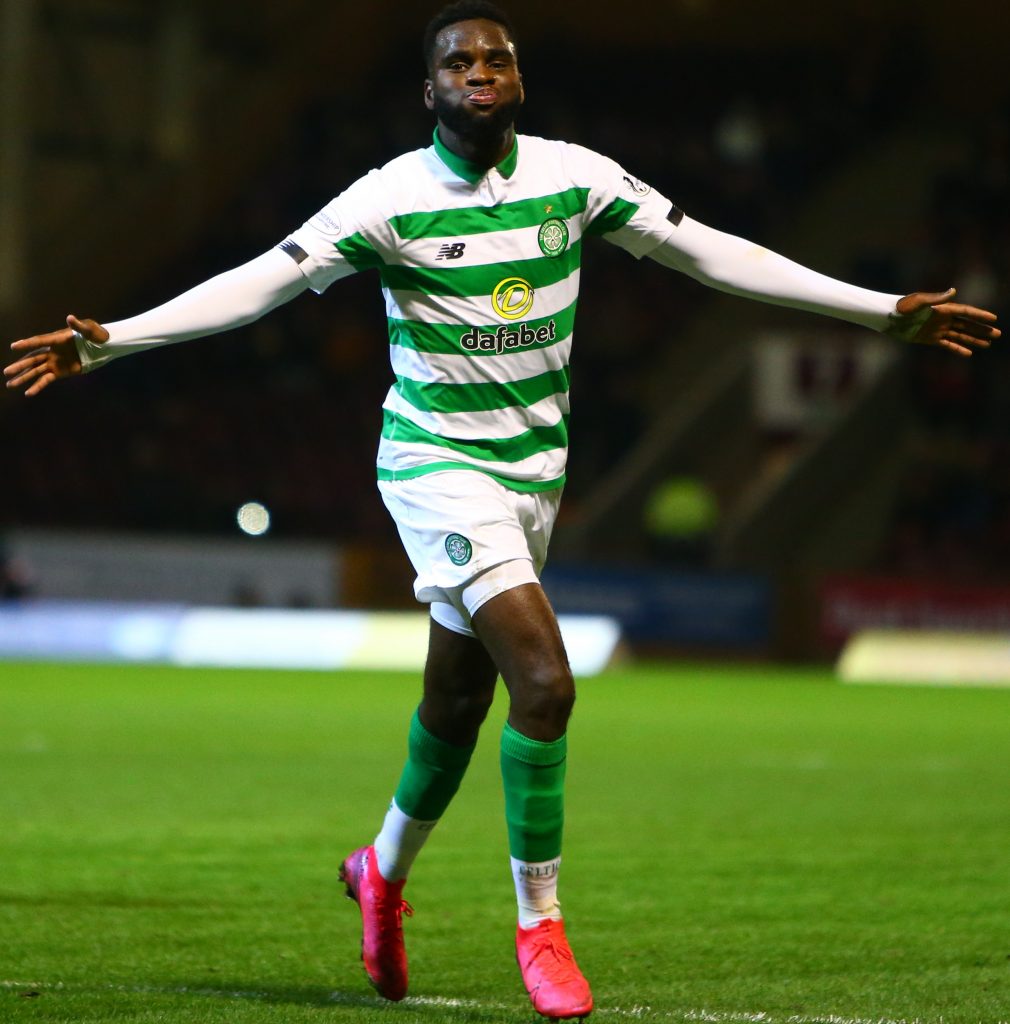 NUMBER FOUR…Odsonne Edouard shares the joy after his exquisite free-kick.

With one excellent touch, McGregor flicked the ball up with his left foot and then followed through with a breathtaking volley that almost ripped the net away. It was a fabulous piece of improvisation from the second best player on the pitch, just eclipsed by Edouard.

The £9million man stole the show, though, with his mesmerising free-kick 10 minutes from the end.

Four minutes later, the French wizard went off to a well-deserved rousing reception from the appreciative Hoops fans as Patryk Klimala made another cameo appearance from the bench.

Job done, three points in the bag, a seven-point advantage preserved and now the attention turns to the Scottish Cup on Sunday and a tie against Clyde at Broadwood.