CELTIC will miss out on a cash bonanza if former striker Moussa Dembele joins Southampton.

The French frontman has been linked with a move to the south coast club for a bargain £10million.

That is almost HALF the fee accepted by the Hoops for the one-time Fulham prospect when Lyon snatched him from Parkhead on the final day of the August transfer deadline in 2018.

Brendan Rodgers brought in the powerhouse attacker as one of his first signings for the club two years earlier in a cut-price cross-border deal with the youngster about to come out of contract at Craven Cottage. 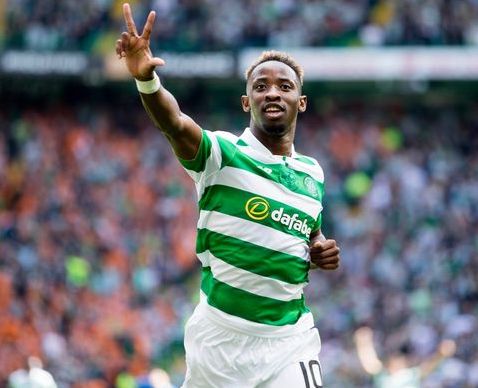 HAT-TRICK HERO…Moussa Dembele celebrates completing his trio in the landslide 5-1 win over the Ibrox side in September 2016.

Dembele, who will celebrate his 26th birthday on Tuesday, became an immediate hit with the Hoops support when he fired in a hat-trick in the team’s runaway 5-1 triumph over the Ibrox club in September that year and played a crucial role in two back-to-back trebles while claiming 51 goals in 94 appearances.

Lyon lured him back to his homeland in a £19.8million switch with former Celtic chief executive Peter Lawwell inserting a clause insisting the Parkhead side would receive a percentage – reported to be as high as 20 per cent – of the profit of any future sell-on.

Early in his career in Ligue 1, Dembele’s value soared to around the £50million mark and Italian giants Juventus were said to be interested in the attacker who has claimed 67 goals in his 143 appearances for Lyon.

PARADISE…Moussa Dembele looks heavenwards after netting one of his 51 goals for Celtic.

He was loaned to Atletico Madrid in January last year with an option to buy at £28.5million, but he failed to score a solitary goal in only six appearances and was returned to the French outfit without any business being concluded.

Dembele is now enterting the last year of his contract and his club will now consider dropping their asking price as low as £10million, according to a report in the Scottish Sun on Sunday.

That will mean there is no profit in the sell-on with the French club taking a hit in his valuation – and Celtic also losing out.

The player has kept close tabs on Glasgow since leaving four years ago and has been photographed at the ground on a few occasions.