Celtic Quick News on News Now
You are at:Home»Latest News»MOYES’ NOISE FOR THE BHOYS
By CQN Magazine on 13th August 2019 Latest News

DAVID MOYES will be in the Parkhead stand this evening when Celtic take on Cluj in the return leg of their Champions League third round qualifier with the score tied at 1-1 after last week’s first game in Romania.

The former Hoops defender reckons his old club are still the best in Scotland, but emphasised the importance of making an impact in Europe after last season’s colossal disappointment.

Brendan Rodgers manoeuvred the team through the hurdles provided by Alashkert and Rosenborg before the unexpected stumble against a mediocre AEK Athens outfit, drawing 1-1 in Glasgow and losing 2-1 in the Greek capital. 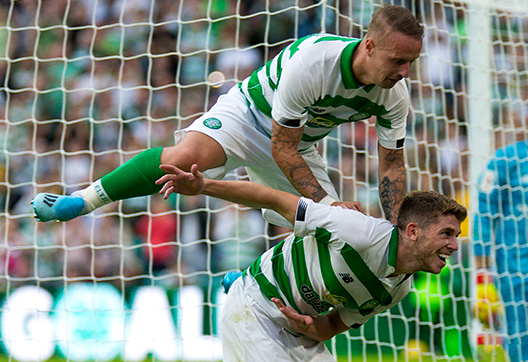 That brought down the curtain of the hopes of glory in Europe’s elite tournament as the Hoops dropped into the Europa League where they were eventually dismissed by Valencia 3-0 on aggregate at the last-32 stage.

The loss in Spain was Rodgers’ second last game in charge before he departed to Leicester City. Celtic are now hoping for a new era under Neil Lennon.

The eight-in-a-row champions have overcome FK Sarajevo (5-2) and Nomme Kalju (7-0) and are 90 minutes away from the play-off with Slavia Prague following the stalemate in Romania last week.

Former Manchester United manager Moyes, speaking on talkSPORT, said: “I think they will have more competition from Rangers this year, but I think the big thing for Celtic is to be in the Champions League. 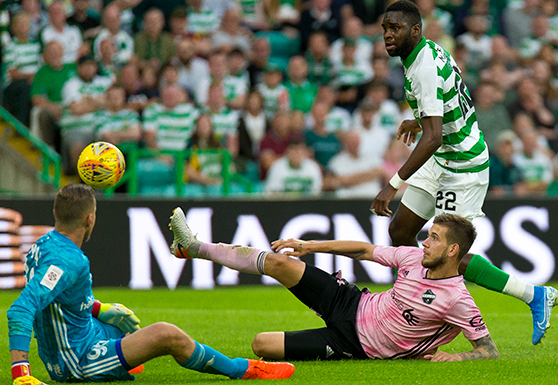 THWARTED…Odsonne Edouard is denied a goal due to the joint efforts of the Kalju keeper and defender.

“Celtic are still the best team but, I think what we are seeing is Rangers trying and fighting hard to get closer, so who knows?

“But I have to say, Celtic being in the Champions League is really important for the club and the supporters, as well.

“Slavia Prague played Chelsea last year and these boys are used to European football, to the travelling, they are happy to go and play. The games will be tough for Celtic, but if they can get through these two rounds then, the big nights at Celtic Park through the winter months are a great thing.”

Moyes, who has also bossed Preston, Everton, Real Sociedad, Sunderland and West Ham in his career, has been linked with the Hoops and Scotland jobs in recent years.