Celtic Quick News on News Now
You are at:Home»Latest News»MULGREW WAITS AND WONDERS
By CQN Magazine on 18th May 2016 Latest News

CHARLIE MULGREW accepts he’s not certain if he has a future at Celtic.
But the Scotland international defender is already looking ahead to helping the club win six Premiership titles in a row!
Mulgrew, 30, is out of contract next month and has seen talks of an extension stall with Ronny Deila leaving Parkhead.
He said: “I’m hoping to be back in the new season, but discussions have been put on the backburner until a new manager comes in.
“I think that’s understandable. However, I have always said how much I love it here and I hope we can get something sorted.”
Mulgrew, who has been linked with Bournemouth and West Brom, left the Hoops in August 2006 for Wolves after a brief loan spell at Dundee United. 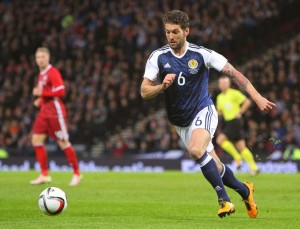 Gordon Strachan allowed the player to move in part-exchange for Lee Naylor, but his successor Neil Lennon brought the versatile star back to Glasgow four years later after he had spent two seasons at Aberdeen.
Injury curtailed Mulgrew’s first team appearances this term to only 20, with six of them coming as a substitute.
He added: “The main objective at the start of every season is to win the league.
“As long as we do that, it’s a success in the end and we achieved five in a row.
“Yes, the campaign could have been better, but we’ve ended with the title, so we’ve got to be delighted.
“We know it’s going to be tough to make it six successive championships, but we’re up for it. 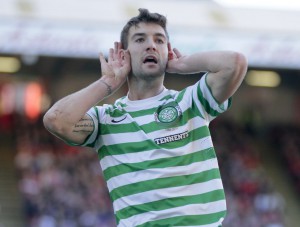 “To be honest, with Rangers (sic)”…”in the league, it gives it that bit extra.
“It means we’ve got a big challenge. I am not saying they will be the main challengers, though.
“Aberdeen will be up there, as well, because they’ve got a good squad of players.”
Mulgrew hopes to get some game time with the Scotland team in the forthcoming friendlies against Italy and Euro Championship hosts France.
The centre-half was the only Hoops player involved in Strachan’s squad as the international boss allowed rests for the likes of Scott Brown, Craig Gordon, Kieran Tierney and 40-goal Leigh Griffiths ahead of Celtic’s Champions League qualifiers in July.
The Scots will face the Italians in Malta on Sunday May 29 and the French in Metz on Saturday June 4.
———————————————
CQN are planning to book advertising space in newspapers in England and Switzerland later this month in relation to Resolution 12. We are crowd funding this at the moment – thank you to everyone who has contributed so far.
The deadline this coming Friday and these advertisements are considerably more expensive that the Sunday Herald ad we booked last year. If you can contribute please do so HERE.
£5 from all books sold on CQNBookstore.com this week will be given to this Newspaper Statement fund.