The news emerged this morning the stand-in gaffer would be leaving the club immediately.

Former players Jimmy Nicholl and Jonatan Johansson will take charge of the team for Saturday’s visit of Kilmarnock, Tuesday’s trip to Aberdeen and the final day encounter against Neil Lennon’s Hibs at Easter Road a week on Sunday.

The Ibrox outfit are desperately attempting to avoid finishing in fourth place in the Premiership. At the moment, they are three behind the Pittodrie men and level on points with the Edinburgh side, but just ahead on goal difference.

Liverpool legend Steven Gerrard has been linked with the full-time post recently held by Mark Warburton, until February last year, and Pedro Caixinha, until October. 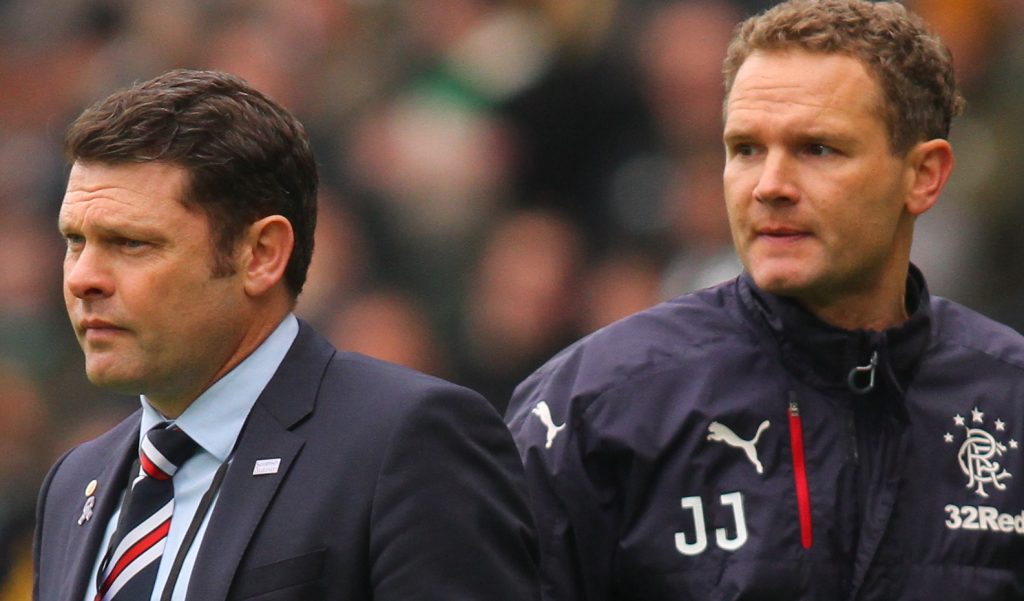 WATCH OUT, HE’S BEHIND YOU…Graeme Murty and Jonatan Johansson, who will take charge with Jimmy Nicholl for the next three games.

Murty was thrust into the hot seat on both occasions and, after the Govan outfit’s failure to lure Derek McInnes from the Dons, was informed he would have the post until the end of the campaign.

The club went back on their word, though, when the axe fell earlier today.

A statement from Ibrox stated: “Graeme Murty has this morning been relieved of his duties as manager of Rangers.

“Jimmy Nicholl and Jonatan Johansson will take charge of the team for the three remaining matches of the season.

“Rangers are grateful to Graeme, who did not hesitate when asked last October to become interim manager after the departure of Pedro Caixinha and then, at the turn of the year, when he was offered the role as manager until the end of the season.

“Graeme has had to contend with difficult and challenging circumstances but conducted himself in a thoroughly professional manner. He will take some time to consider his options, which include returning to his role at the Rangers Academy.

“Jimmy Nicholl and Jonatan Johansson have already started preparing the team for the match against Kilmarnock on Saturday and they will be in place for the two remaining fixtures, against Aberdeen and Hibernian.

“The club hopes to be in a position to comment further on the managerial situation in the near future.”

Celtic boss Brendan Rodgers has already slammed the Ibrox outfit’s treatment of the caretaker boss he believes was “thrown to the garbage”.

Murty suffered in the fall-out of the champions’ one-sided 5-0 trouncing of his team to seal their seventh consecutive Premiership title at Parkhead on Sunday.

For the second derby in April, his position was undermined in the days leading up to the game.

After chairman Dave King cast fresh doubt on whether the ex-Scotland international defender would have his contract renewed in the summer – ahead of the 4-0 Scottish Cup semi-final hammering from Rodgers’ rampant Celts – it emerged that Steven Gerrard was the frontrunner to take over in the build-up to the weekend confrontation.

Following questions concerning his former Liverpool skipper Gerrard, Rodgers said: “I’m a wee bit reluctant to talk on it too much purely because Graeme Murty has been put in a job.

“Last year, he was Under-20s coach and everyone was saying: ‘He’s a good guy and he’s doing very well’.

“And now because of a couple of defeats and it hasn’t quite worked out, he’s just been thrown to the garbage, really, and I think it’s very, very discourteous.

“The guy went in there and he’s done his very, very best in what looks like, from the outside, to be very, very trying and difficult circumstances.”