Celtic Quick News on News Now
You are at:Home»Latest News»‘MY ASSIST WAS THE ONLY THING I DID IN THE GAME,’ ADMITS CHRISTIE
By CQN Magazine on 10th December 2019 Latest News

The elegant midfielder admitted admitted the Hoops were nowhere near their best and relied on the heroics of keeper Fraser Forster to bring them their dourth successive triumph in the competition against Steven Gerrard’s Ibrox outfit.

However, Christie reckons the Parkhead men did enough to dig in and earn the silverware, especially after right-back Jeremie Frimpong had been ordered off three minutes after Christopher Jullien had scored what proved to be the only goal of a dramatic encounter on the hour mark.

The Dutch defender, who celebrates his 19th birthday today, saw red for a foul on Alfredo Morelos who then saw Forster dive superbly to his right to beat away the resultant penalty-kick.

Christie, who scored the only goal of last season’s Final against Aberdeen, turned provider on this occasion with a left-wing free-kick that saw the £7million French defender turn the ball beyond the exposed Allan McGregor.

The Scotland international, speaking to the Daily Record, said: “It shows how far we’ve come since the start of the season, when we were playing qualifiers and winning, but still shipping goals whereas now we seem to have steadied that, even though we had to move players around after the red card.

“Kristoffer Ajer went to right-back and did brilliantly against Ryan Kent, who’s been a big player for Rangers this season. 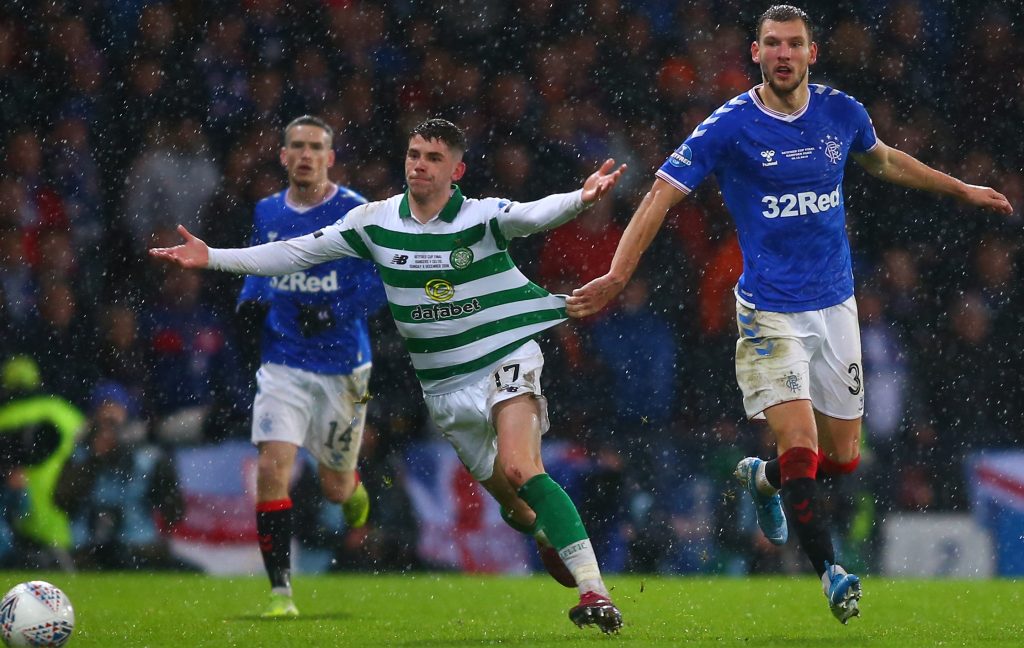 GET A GRIP…Ryan Christie is held back by left-back Borna Barisic.

“Nir Bitton came on and did well against Alfredo Morelos, so, even with Rangers throwing the kitchen sink at us, we got there, which is incredible.

“It’s a cliche to say champions always find a way to win, but I kept looking up at that clock in the last 10 minutes and it seemed to take an eternity, especially when the game has turned into wave after wave of attacks from them.

“That made it difficult for us to get out because all we were doing was blocking shots and crosses, but we did what we needed to do to get over the line.”

Christie believes he and his team-mates have come through the most severe test of their glittering 10-trophy run and thinks they will be even stronger for the experience.

He added: “My assist was the only thing I did in the game! It was the toughest Final we’ve played in. We’re honest enough to say we were nowhere near our best in terms of the fast-flowing attacking football that everyone is so used to from us.

“We came in at half-time and admitted we weren’t at our best and because of the pitch and the weather it wasn’t the day to play the nice football we’d wanted to, so we had to find another way to get there.

“Scoring from the set-piece was an example of that, as was the way we defended their set-pieces – and we came through all that adversity to win it.

“We showed we can do the other side of the game, especially in the last half-hour when we were down to 10 men. We showed great resilience and a willingness to defend our penalty box and we kept going with good energy.

“Plus the big man between the sticks produced one of the best goalkeeping performances I’ve ever seen.”

The Glasgow neighbours meet again at Parkhead on December 29 in the Premiership and Christie added: “We’ll definitely learn from it because that was far from how we wanted the game to go when we went out there. We felt we’d be dominant, but we’ll take what we’ve learned into the game at Parkhead.

“All the outside talk was that this was going to be their time and they were going to do outdo us, so it was great to prove everyone wrong and win that 10th consecutive trophy.”