One of the best memories every Celtic supporter has is of the first time they saw Celtic play. Win, lose or draw, seeing the occasion is special. Here, Paul Morris, remembers his first game and at a very special point in our history… 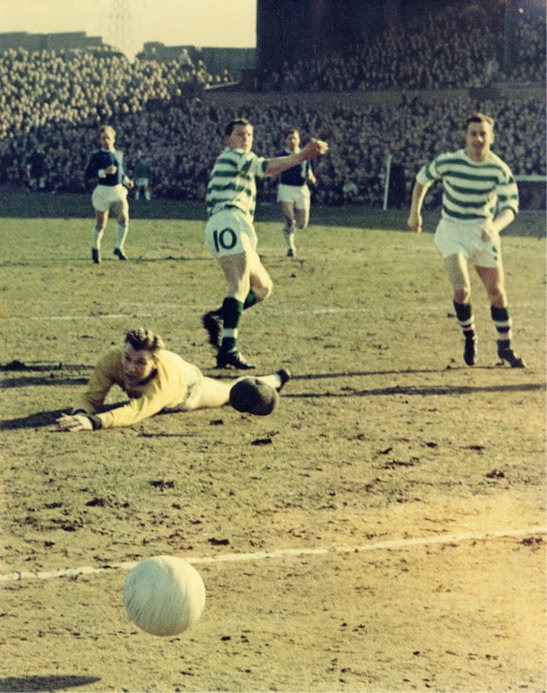 It was 1966, the year the World Cup was cancelled due to lack of interest. I was about to turn eight and I was praying that I would get a new football to replace the one that burst against the fence on its first day of play in earnest. I was the only Celtic fan in a large family; Dad was an armchair Hibs fan and my two big brothers followed Motherwell (one of them has since seen the light). It wasn’t a ball I was to get but a tap on the shoulder followed by a question I will never forget, ‘D’you want to go to Parkhead?’

I looked up. It was Mr Timmins, the grocer, his big face framed by that trademark deer-hunter hat. Between teeth that gripped a permanent pipe, he repeated the question. I couldn’t answer. He guessed what was going through my head so he added, ‘Your Mum says it’s okay.’ I held my breath and I think I’m still holding it.

We parked the car not far from the ground. A wee scallywag asked if he could look after it. Mr Timmins informed him he would get the money when the game was over – so long as there wasn’t a scratch on it.

Football has always been a business, but it didn’t feel like it then when I was hoisted over the gate without paying. Mr T. had told me we would be in the stand so I was amazed to discover that we were sitting down. I looked out at the huge green arena. The game had started. I can’t even remember who we were playing. I wasn’t looking at the opposition. I was no more than fifty yards from the Celtic football team. In real life football was much more physical than I imagined. The heavy ball hammered against bones and I shuddered.

Half time was magic. The field of dreams cleared and it was a time for us – the fans. The men all around discussed the first half with varying degrees of wisdom. Me? I was otherwise occupied – with my first pie and Bovril, all to myself. I carefully stripped the pie of its rampart-like crust, revealing the white dubious mass within and I burned my mouth on the Bovril. Brilliant.

I passed the second half in a dream, intoxicated by the swirling of men in green and white, by the singing and chanting of thousands of hoarse worshippers and by the aroma of Mr Timmins’s pipe tobacco; his smoke drifted downwards through the stand, wrapping itself like a wraith around unsuspecting heads.

All too soon I was back in my back garden, my own field of dreams, where the grass had long ago turned to mud. And there was a new football waiting for me. I looked at the fence, assassin of footballs. Two upstanding bricks acted as goalposts. I had come all the way from Bothwell to the East End of Glasgow and I had seen the heroes who had existed only in player cards or in typed formation on newspaper team-sheets. I had seen a lesson in astral physics; Jimmy Johnstone running rings round Saturn, Bobby Lennox moving at light speed and big Billy McNeill defying gravity at the near post.

I took a few steps back and faced the goal. Two steps forward and I struck that new ball, sweetly. It went in, just inside the right-hand brick, clattering off the evil fence. I waited, breath baited as the ball rolled back towards me. Time stood still. There was no tell-tale hiss. Surely this was a portent of great times ahead for my team.

A year later I would commit to memory a litany of eleven names that would make up one of the mythical football teams of the century. Simpson, Craig and Gemmell, Murdoch, McNeill and Clark, Johnstone, Auld, Chalmers, Wallace and Lennox.

I have never seen an ancient map of Glasgow but over what is now known as Parkhead it must surely have been marked with the legend, ‘Here be giants’.