SCOTT BROWN aims to lead by example when Celtic take on AIK Stockholm in the second leg of their Europa League play-off in Sweden tonight.

The Hoops will face a testing 90 minutes as they protect a 2-0 first leg lead from the Parkhead confrontation seven days ago when James Forrest and Odsonne Edouard netted second-half goals.

It will be the champions’ fourth away game on their European travels this season and they are unbeaten so with wins against FK Sarajevo (3-1) and Nomme Kalju (2-0) while there was a 1-1 draw with Cluj.

At the age of 34, Brown goes into battle again and insists he is prepared for another gruelling encounter as he sets out to confound the critics who keep writing him off.

If he does not perform to the highest level this evening, the Celtic skipper has a fair idea of the response he will received.

Brown, speaking to the Daily Record, laughed: “My legs have gone? Everyone is going to say that.

“To be fair, I have got thick enough skin to deal with all that. I’ve been hearing all this since I was 28.

“Listen, I have been rested a few times and it’s done me the world of good. It’s hard pushing through pre-season after 10 days holiday. But there are younger lads coming through who are pushing you.

“I feel okay and will just keep going until somebody eventually drops me off the edge of a cliff. 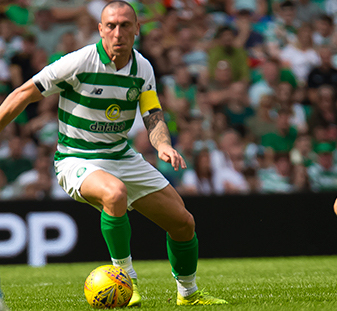 “Listen, I enjoy playing football and as long as I’m doing that the only person I’ll listen to is the manager.

“As long as I’m picked to play, I’ll continue to give my all. My form doesn’t really matter.

“Everybody else seems to think about me, but if we keep winning games and playing well, it doesn’t matter if I’m in the team or not.

“All the lads are in exactly the same position. That’s what’s great about football, that competition. It keeps them going and it keeps me going.

“I play with a smile on my face more than anything now. I know my career is slowly coming to an end, but I still enjoy winning and I always give 110 per cent.

“I have got two years left on my contract and I will be playing for those two years. I have still got a good 20 months left. You never know after that.

“We will see what happens, whether it is at Celtic or somewhere else.

“Just now it is about continuing to play with Celtic as long as I possibly can.”

Brown is determined to lead his troops through the obstacle course that will lead to the group stages draw in Monaco tomorrow.