The Fir Park gaffer attempted to defend teenager James Scott, who created the storm, and said he got involved in the incident because of lack of experience.

The forward raced onto Liam Grimshaw’s throw-in down the right flank that was intended for the Hoops players to retrieve the ball after Kristoffer Ajer had knocked it out of play with Ryan Christie injured.

Scott, though, went against protocol as he hared towards keeper Scott Bain who saved his angled drive before Gboly Ariyibi fired in the rebound.

That pulled the scoreline back to 2-1 after the champions’ two first-half efforts from Scott Sinclair and Odsonne Edouard. 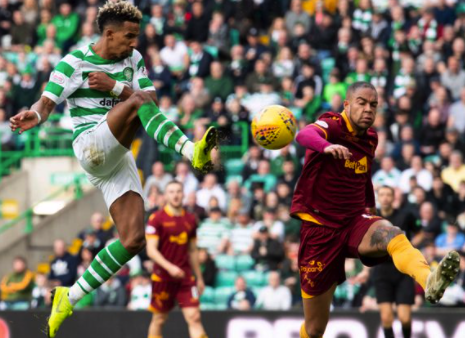 BY THE RIGHT…Scott Sinclair steers in Celtic’s opening goal.

Rodgers wasn’t entertaining excuses from his Well counterpart. He said: “If he’s old enough to play and start….you know, Euan Henderson is a kid, as well.

“Nah, he knows exactly what he is doing, he’s played in football games before. He’ll learn from it, of course. I’m disappointed for him. He’s making his first start for Motherwell. But there’s no excuse, there’s no excuse

“I’m disappointed for my players because we’ve kept clean sheets domestically, focused on defending and that’s a goal that goes against our work.

“But, more importantly,it’s a goal that goes against the ethics of the game and that’s the disappointing aspect.

“Motherwell had a chance to do something about it and chose not to.

“It’s a difficult one for the referee because it’s not the referee’s job. I think the right-back, in fairness to him, has tried to throw it back into the space for Kieran to run into, but the young striker has taken it and attacked the goal.

“Everyone had sort of stopped. I think Motherwell had an opportunity then to do something in the spirit of the game, but chose not to and went on to press for an equaliser.

“That’s where the credit comes in for my players. It was a real injustice in the game. We’re obviously disappointed with the action. But I’m so proud of the players with the way they did react and got the win.”

Late goals from Edouard, with a stunning 30-yard free-kick that zoomed high into the top right-hand corner of keeper Mark Gillespie’s net, and a curling effort from substitute Oliver Burke made certain justice was done.

Rodgers, meanwhile, confirmed playmaker Christie looks as though he has pulled his hamstring with a scan set for today.

The in-form midfielder is now a doubt for Wednesday’s trip to Tynecastle to take on Hearts in the pursuit of another victory to maintain the eight-point lead at the top of the Premiership.

Scott Brown, who missed the 4-1 win over Motherwell through suspension, is expected to return against Craig Levein’s outfit.