Celtic Quick News on News Now
You are at:Home»Latest News»‘NAISY? I’VE HAD A LOT WORSE. LEVEIN? HIS BANTER’S GETTING BETTER!’ BROONY’S VERDICT
By CQN Magazine on 9th May 2018 Latest News

SCOTT BROWN has revealed he has not fallen out with Steven Naismith – despite the on-loan Hearts midfielder’s crude assault at Tynecastle.

Remarkably, referee Bobby Madden took not action following the wayward challenge on the Celtic skipper as the champions came back to win 3-1 in Edinburgh on Sunday.

TV pictures clearly showed Naismith going in late and high on the touchline and trackside on Brown and there could yet be retrospective action from SFA compliance officer Tony McGlennan.

But the 32-year-old Hoops inspiration insisted he will not ignore his former international colleague the next time their paths meet.

Brown said: “I get on brilliantly with Naisy and still will, to be fair. It’s one tackle. I’ve had a lot worse from a lot of other people and still speak to them. We both want to win. He was playing in a kind of number 10 role and I was sitting in front of the back four, so something was going to happen.

“It is what it is. He wants people to win. He’s played in the English Premier League so he knows what top standard is and he’s maybe not getting it where he is.”

Hearts boss Craig Levein defended the tackle as well as the decision to make the surface as difficult as possible to play on. He also claimed the club would challenge any potential ban for the Norwich City player. 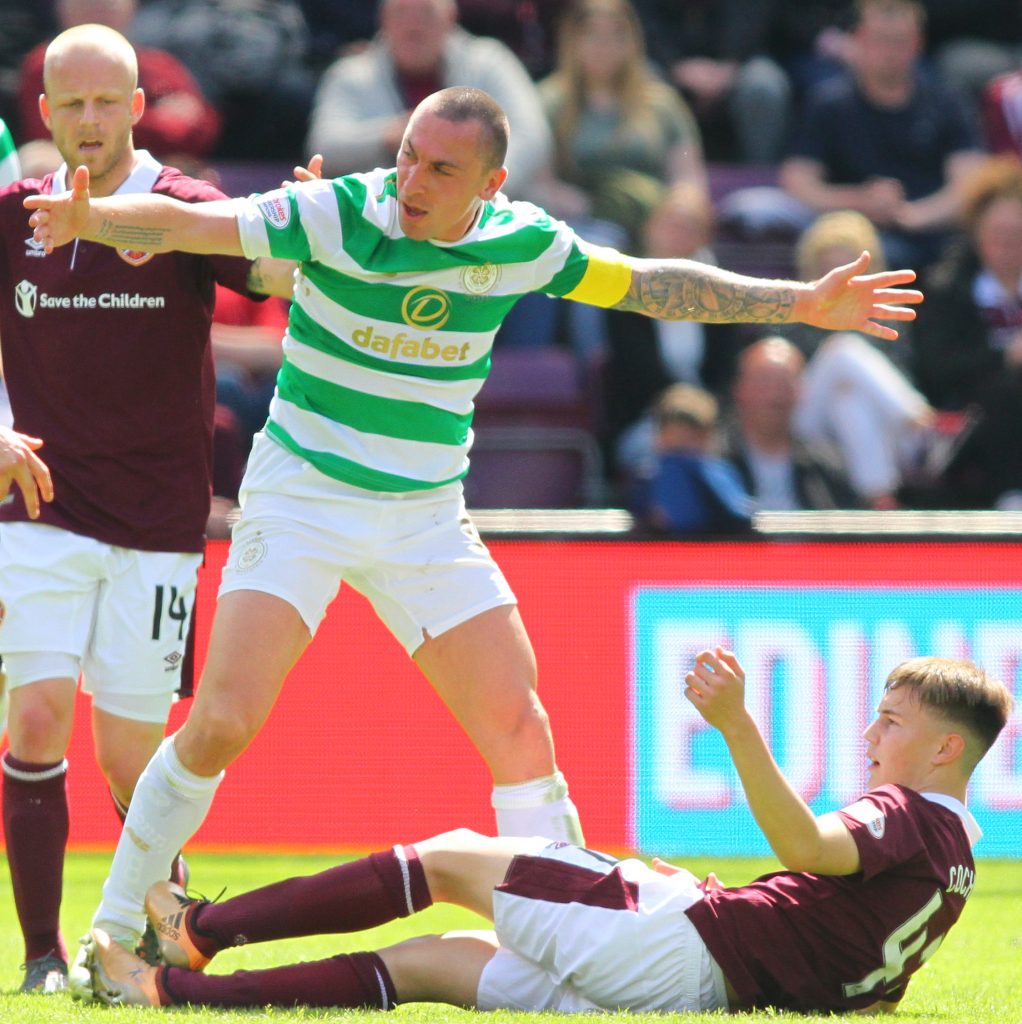 Brown grinned: “Craig’s banter is getting better as he gets older. If he was younger and had this sort of banter I’d have been buzzing! Craig can say what he wants. It’s all speech play to deflect from the result and how well we played them at our own game and the fact we beat them on a shocking park.”

The influential onfield leader, who has guided the team to seven successive Premiership titles, has been involved a several flashpoint incidents this season with Aberdeen’s Sam Cosgrovbe and Ross County’s Andrew Davies both be ordered off after shocking challenges.

Brown added: “Keep letting the bad tackles happen. The more people get sent off, the better. It will help us. That’s if they get sent off!

“If other players are trying to wind me up, they are wasting their time.

“I don’t care about the tackles, but it’s always going to be like that because people think I’m a hard tackler, unfair and lunge into challenges.

“But that really isn’t my game any more. My game is to get on the ball, keep a hold of it and dictate play and play other people in.

“I cover positions and look after everyone on the park sitting in front of the back four. I break up play, but I stay on my feet and don’t lunge in, slow the play down for my team-mates to come in and help me. If you look at touches in the game, I’m probably up there with most players in the team.

“It goes through myself, Tom Rogic and Callum McGregor in the middle of the park. We try to dominate games from start to finish. We try to play football the proper way on a nice, short pitch with loads of water on it.

“We try and slow it down a bit. We know when to come back in and defend but also know when to speed it up. We’ve got pace everywhere in the team.