BOLI BOLINGOLI-MBOMBO is already a hit with the Celtic support – without kicking a ball in anger.

Thanks to Social Media, the Hoops’ latest recruit, who agreed a four-year deal yesterday after Rapid Vienna accepted the champions’ £3million offer, is already being hailed a cult hero.

Boli featured in a flashpoint incident with Colombian hothead Alfredo Morelos when the Austrians and Steven Gerrard’s Ibrox side clashed during a Europa group tie in the previous campaign.

The Belgian left-back reacted immediately to a petulant push from the fiery frontman who was sent off FIVE times last season.

Boli clipped both of Morelos’ ears in a spontaneous gesture and, as expected, the player crashed to the turf as though he had been struck by an invisible express train. The referee saw the handbags moment and ignored the antics of the Ibrox forward and took no action. 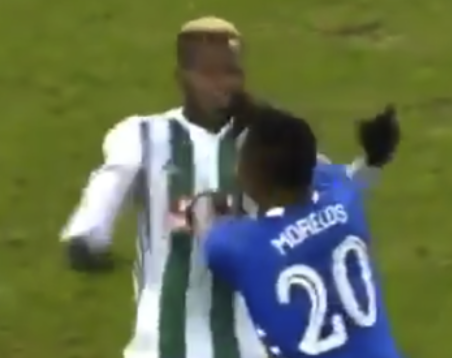 CLASH…new Bhoy Boli in the incident with Alfredo Morelos.

Looking back at the kerfuffle, the new Bhoy, speaking to the Daily Record, said: “That I remember, yes. Some things like this can always happen in football, but it was nothing bad at all.

“I didn’t want to do it because he was a Rangers player or anything like that, it’s just that things like this can happen on the pitch. It was heat of the moment.”

Boli added: “The atmosphere was not bad at all and it was a tough game.

“You see the level is a little bit higher here than in Austria, so it was good to play against this team, so I can see a little of what the competition is going to be like.”

The defender, who was pictured at Parkhead yesterday with the No.23 shirt with the name Bolingoli on the back, could get the opportunity to go head-to-head again with Morelos with the first Glasgow derby rescheduled for Ibrox on September 1 with a noon kick-off.

The game will be beamed live by Sky Sports.