Celtic Quick News on News Now
You are at:Home»Latest News»NEW BHOY HAYES IN A HURRY
By CQN Magazine on 28th June 2017 Latest News

The Republic of Ireland international, who grew up in Dublin supporting the Hoops, is standing by to play his first game against Austrian second tier outfit BW Linz tonight.

Hayes admitted: “I don’t know how it will feel. I couldn’t wait to pull the strip on for my unveiling last week. It has that effect on you – you just want to keep it on.

“I had photos done when I was getting the medical and then at my unveiling there was a strip with my name and number on it.

“I couldn’t stop looking at it. There I was in the boardroom surrounded by trophies with a Celtic top bearing my name. It was amazing.

“I’m a bit overwhelmed by it all and I look forward to get going. It’ll mean the world to me when I walk into a dressing room here in Austria and see my jersey hanging there. 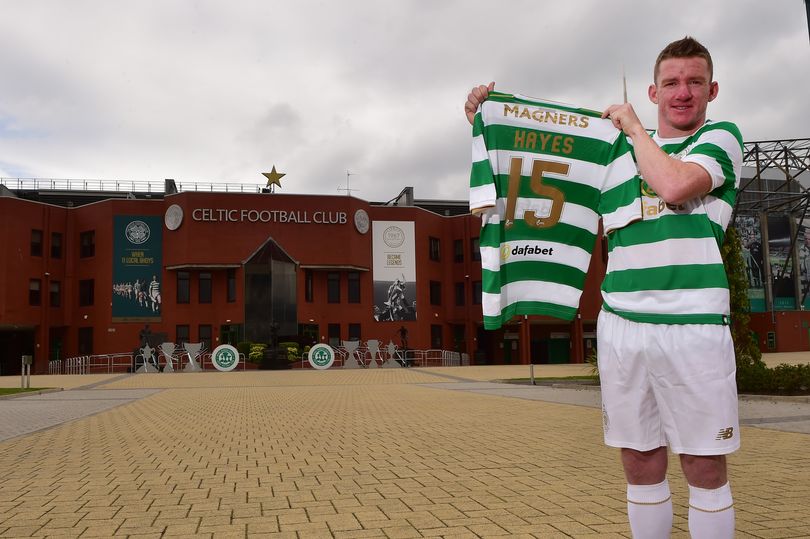 “I remember someone saying to me that when you step on a pitch with Celtic you are either adding to or taking away from your reputation. I want to add to it now that I’m wearing a Celtic top.”

Hayes, who celebrates his 30th birthday a fortnight on Sunday, added: “It’s exciting and I’m looking forward to it.

“I don’t know what role I’m going to play or where the manager sees me. It’s more a case of the club moving forward under his guidance.

“After last season it’s a case that if the manager says jump then you say: ‘How high?’ I take full confidence from what he’s done so far and the club can only progress under his leadership.

“I’ve looked as this move in many ways and trying to get into the team is going to be tough.

“There is also a different level of player here and the manager can use his squad. It’s a bigger squad than Aberdeen where we had maybe 15 or 16 players who could be used throughout the season.

“Celtic have a bigger and better squad all round and I’m sure everyone will be used throughout the season. You look at that and believe you’ll get your chance eventually.

“For whatever reason, you aren’t in the team then it’s because they are better than you and can do a better job.

“I didn’t know any of them. Playing against Celtic five or six times a season, you get used to them and I’ve seen a couple of the lads at the PFA awards, stuff like that. Off the park, I’ve spoken to a few of them here and there. But it’s been nothing but nice.

“As soon as you’re on the pitch, it’s a different thing. I’ve still got stud marks on my hamstring from Browny in the Cup Final!

“He’s a different animal on the pitch. Off the pitch, every time I’ve been with Scott, he’s been nothing but pleasant to me.

“A lot of people don’t see that side to footballers. They only see the side that’s on the pitch. Scott gets a tough time from other clubs, opposition fans especially, but he’s not too bothered.

“Off the pitch, he has been brilliant. Speaking to the lads, they are all down-to-earth and I’ve got nothing, but respect for them.”