MOHAMED ELYOUNOUSSI hopes to be on target against Lazio at Parkhead tonight – and he will remember to celebrate with boss Neil Lennon.

The Celtic striker, on loan from Southampton for the season, scored his first goal for the club in the 2-0 Europa League Group E win over Champions League conquerors Cluj at Parkhead at the start of the month.

Elyounoussi started and finished the move that added to Odsonne Edouard’s headed opening goal in the first-half.

The Moroccan-born Norwegian international set off in the direction of the Hoops bench to share his delight.

Manager Lennon ad,itted he thought he was making a beeline for him as he stood on the touchline, but he was body-swerved as Elyounoussi headed for the substitutes. 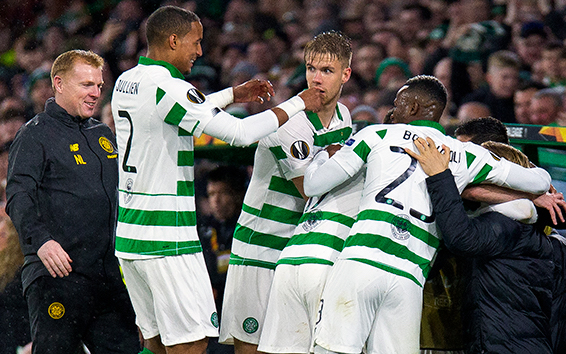 The left-sided frontman, who claimed another two goals in the 6-0 rout of Ross County at the weekend, admitted he had a pre-game commitment and he didn’t intend to blank his gaffer.

Elyounoussi, speaking to the Evening Times, said: “That wasn’t the plan. I talked with Moritz Bauer before the game and he said: ‘If you score, come looking for me’.

“I remembered that when I scored, so that’s why I ran to him and not the manager.

“I’ll remember for next time!”

Hopefully, that will be against the Serie A outfit as the forward hopes to stage an action replay.

He added: “I try to play my best in every game and help the team. I like to create chances or score myself and to get a goal against Cluj that night was special.

“It was a great moment for me, it had been a while since I scored. It was amazing to score in front of 60,000 people. You would struggle to find a better atmosphere than the one you find at Celtic Park on a European night.”