Celtic Quick News on News Now
You are at:Home»Latest News»NEW BHOY READY FOR HOSTILITIES IN THE CAPITAL
By CQN Magazine on 26th January 2022 Latest News

MATT O’RILEY hopes to avoid the capital punishment meted out to debut Bhoys Carl Starfelt and Kyogo Furuhashi at Tynecastle in July.

The Swedish centre-back had just joined Celtic 48 hours earlier in a £4.2million switch from Russian giants Rubin Kazan when he was pitched in at the start of Ange Postecoglou’s first-ever Premiership encounter.

Striker Kyogo Furuhashi, who arrived that morning following his £4.6million move from J-League side Vissel Kobe, was thrown on with 11 minutes to go as the new Hoops boss commendably chased a debut win against Hearts.

The score was level at 1-1 in the fading moments when referee Bobby Madden awarded the home side a mysterious free-kick on the left and John Souttar eluded both Starfelt and makeshift central defender Nit Bitton to bullet a header beyond the badly-positioned Scott Bain for the winner. 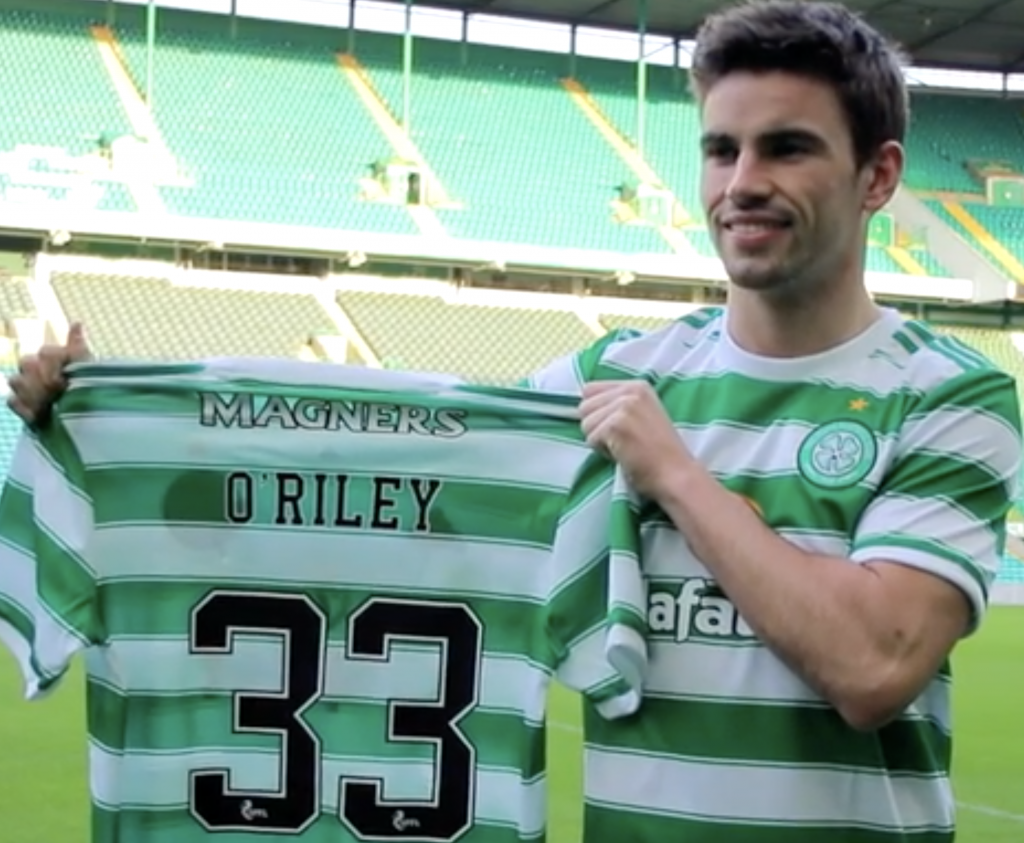 GETTING SHIRTY…new Bhoy Matt O’Riley with his No.33 jersey.

It was a sickener for Postecoglou and his players and Starfelt had a baptism he would like to forget as he was run ragged by Robbie Neilson’s men.

Former England youth international O’Riley, who joined in a £1.5million deal with MK Dons last week, is now on the brink of a quickfire first appearance against the Edinburgh outfit with the Hoops hit by a series of injuries to midfielders with skipper Callum McGregor, Yosuke Ideguchi and David Turnbull all sidelined and Tom Rogic unavailable while on World Cup duty with Australia.

The latest of Postecoglou’s five acquisitions this month is fully prepared for a debut in the hostile atmosphere of Tynecastle and played the final game of his 30 outings for the English League One club just 11 days ago against Portsmouth.

O’Riley, who scored seven goals for MK Dons this season, said: “First day in, I really felt at home, so from that sense, it’s really good and I feel good. Let’s see what happens.

“I feel ready to go, which is the main thing. I have played enough games to feel in good physical shape and, hopefully, I get the chance.

“Portsmouth away was a tough game, as well, so I feel physically sharp.

BAPTISM OF FIRE…Carl Starfelt (second left) follows skipper Callum McGregor, Scott Bain and Nir Bitton onto the Tynecastle pitch for his Celtic debut – only 48 hours after arriving in Scotland from Russia. 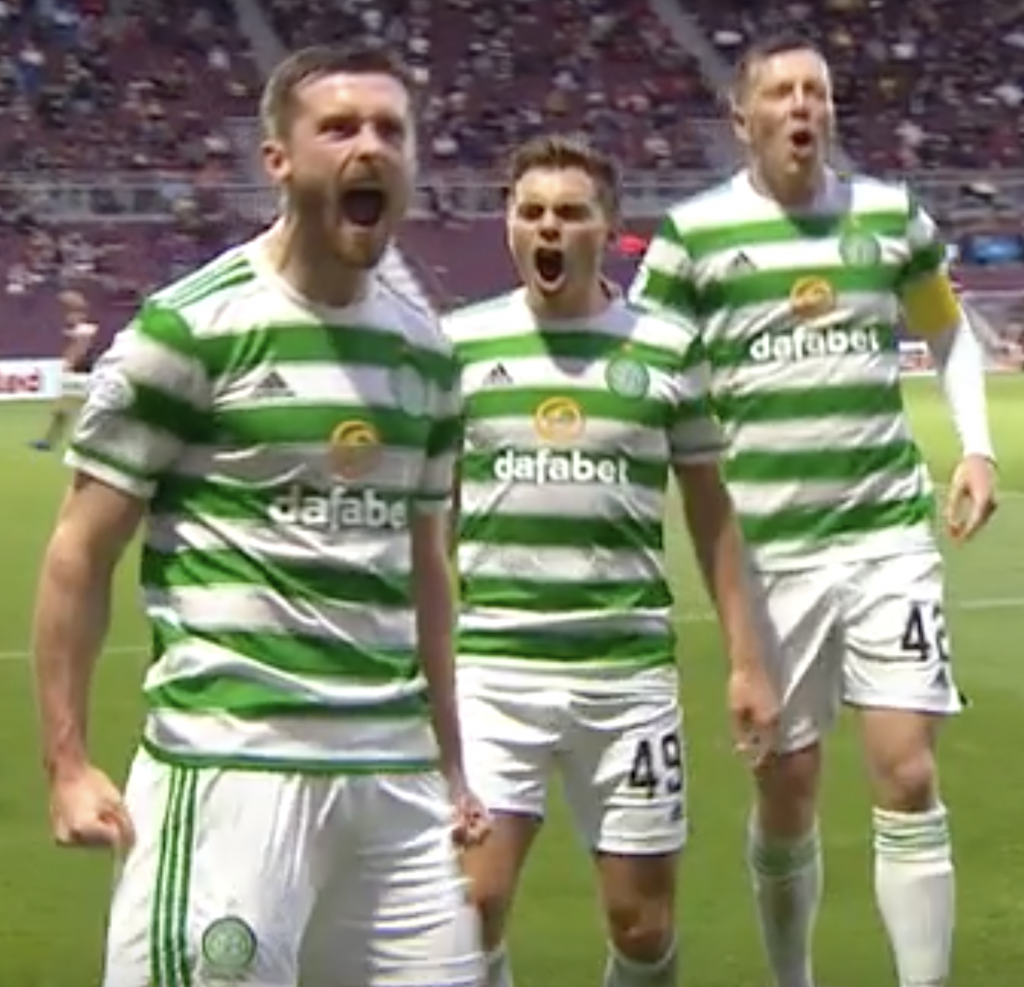 IN WITH A SHOUT…Anthony Ralston, James Forrest and Callum McGregor celebrate the Hoops’ equaliser, but they were undone by a stoppage-time winner.

“Playing 30 games is quite a lot, so my body is ready for the amount coming up because we have a lot in the next period and we are going to need everybody to be at it.”

Celtic’s confrontations in the capital – Easter Road as well as Gorgie – tend to be fiesty affairs and O’Riley admitted: “I have been told that already.

“I’ve been told to be ready for a hostile atmosphere, but that’s what I’m here for – to experience something new and, hopefully, I can really make the most of it.

“It’s important to be adaptable to any kind of game you play and, while on the whole I wouldn’t say I’m hectic in the way I play, I am going to have to adapt to it.

“We can try to stamp our style in the game to try to make it less hectic and manic, but I have to be ready for whatever comes my way.”

Reflecting on his versatility in a range of midfield positions, O’Riley, speaking to the Daily Record, added: “I can do all of them, but I most enjoy the No.8 role because it involves a bit of everything. 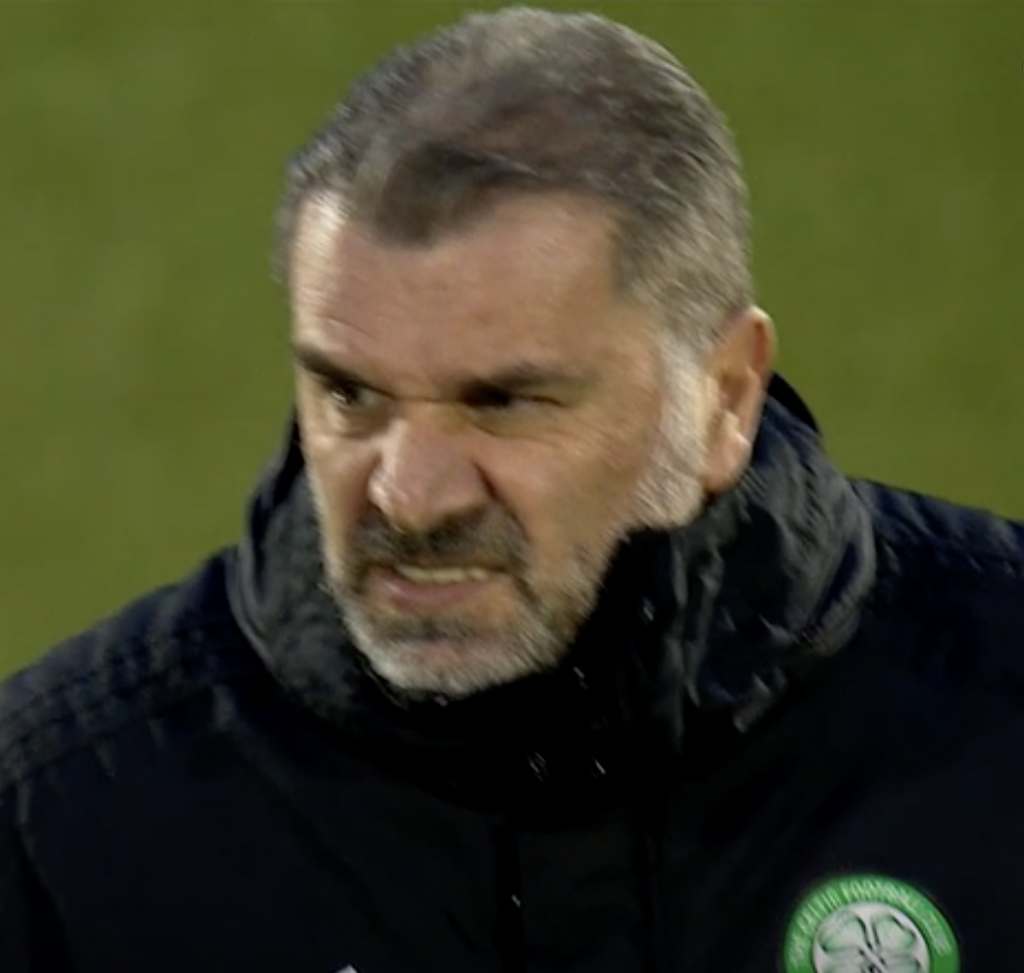 “Listen, if I am needed in the No.6 role a bit deeper, then I have the tools to do that and that’s always handy to have because it gives me more options and gives the manager more options, as well.

“It’s a strength, but if I’m going to the one I enjoy most then it’s probably being an eight, box to box type of player.

“I like to get around the pitch and I’m happy to help out in both boxes.

”Injuries come unfortunately and, while I certainly don’t want any Celtic players to be injured, it does happen.

“When it does someone like myself has to be ready, so we will see what happens.

“If I am called upon I will do my best.”