GREG TAYLOR won his first medal in football last month – and admitted he was DISMAYED Celtic did not get the opportunity to complete the job on the pitch.

The Scotland international left-back, who joined the Hoops on the September 2 deadline day in a £2.25million switch from Kilmarnock, was desperate to clinch his first piece of silverware with a flourish.

Instead, the 22-year-old defender had to be content with the SPFL awarding the Hoops their ninth successive title while they led the Premiership by 13 points with only eight games to go before football went into lockdown due to the coronavirus pandemic.in mid-March.

But the attacking left-sided performer insists Neil Lennon’s men would have added to their advantage before the end of the scheduled programme.

Taylor, speaking to the Darvel FC Podcast, said: “We were 13 points clear, we were in a great run of form. Ideally, everyone would have liked to have finished. 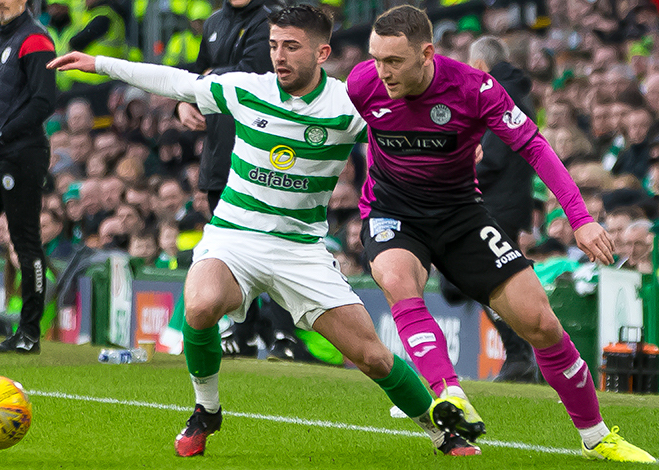 ON THE RUN…Greg Taylor takes on St Mirren full-back Lee Hodson in the last game of the season on March 7.

Taylor missed out on the 1-0 Betfred League Cup Final victory over Steven Gerrard’s Ibrox side at Hampden on December 8 because he was ineligible after playing in an earlier round with the Rugby Park outfit.

Jonny Hayes fitted into the No.3 slot with Boli Bolingoli, bought from Rapid Vienna for £3million in the summer, sitting it out.

Taylor reflected on the days leading down to his eventual move to Parkhead and said: “There was maybe a wee bit of ongoing interest, but nothing materialised until the last few weeks.

“I wanted to go, I was desperate, but it was a nervous few weeks, not ones I would want to relieve, if truth be told.

“I had picked up a wee injury and it took until the last day of the window, but going to Celtic Park with my family was an amazing night.

“I hadn’t really trained properly for two weeks because I had been away with Scotland.

“I was quite thankful of that, because the standard there was right at it and it gave me a little bit of a breaking-in period.

“I think the first person I saw was Broony, he put me at ease straight away.

“He said: ‘How are you doing, wee man?’ and chatted away. At that point you think: ‘I will fit in fine’. You just want to get started.

“But I think a few lads have said that they didn’t think I had signed until January!”

Taylor had started only one league game before the turn of the year, but a dismal showing from Bolingoli in the 2-1 loss to the Govan outfit on December 29 opened the door for the Scot in 2020.

He made 21 appearances in his debut campaign and is ready to play his part in the tilt at 10 in a row.