CELTIC’S new striker Colin Kazim-Richards has promised to be a winner in the Hoops.

He admitted: “I’m ecstatic right now, more than happy. I know all about Celtic.

“It is one of the biggest clubs in the world fanwise and for me to come here is an absolute privilege.

“The fans, the atmosphere, the opportunity to wear the green-and-white shirt and to be able to win things. These are the reasons I’m here.

“I’m a winner and Celtic have a tradition of winning things, so I want to be a part of that,

“I want to be able to show that to my kids, to come here and be part of something. 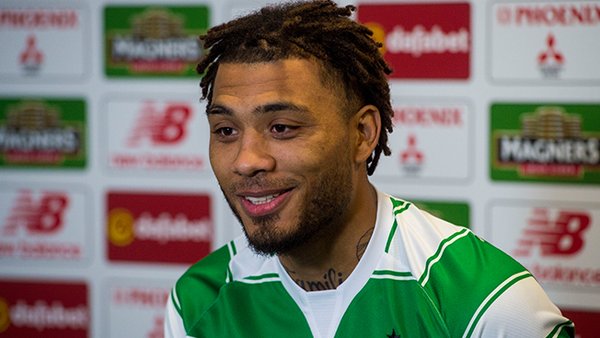 “I’ve never been to Celtic Park before, but I’m aware of the sort of atmosphere the fans can create on TV and I’m really looking forward to playing here.

“It’s an amazing club, a massive club and I want to feel the atmosphere straight away.

“To come here you have to have the mentality of winning and have the pressure of the fans because they know you should be winning.

“For me to come and add to that and be able to put my little per cent in to help the team achieve those goals will be massive for me.”

Kazim-Richards joins as Celtic are preparing for Wednesday’s crunch league encounter against Aberdeen at Pittodrie and the game might just come too soon for him to make his first appearance.

He continued: “I’ve spoken to the manager over the weekend and he’s happy with the move.

“For me to have a coach who wants you, as a player, that’s something you need and it gives you extra confidence.

“Match fitness is something you can only get from playing games. It doesn’t matter how often you train, especially with the tempo that Celtic like to play at – high pressing and moving a lot along the pitch, you have to get used to it.

“It doesn’t matter if you’ve been playing the whole season – a different system is a different system, so I’ll need to come in and get used to the lads, but as soon as the gaffer gives me the word go, I’ll be there to pull the shirt on.”

The player is also looking forward to teaming up with Leigh Griffiths.

He admitted to being impressed by the club’s top scorer’s contribution so far this season.

Kazim-Richards, speaking on Celtic TV, added: “Hopefully, some of his goals can rub off on me,. Twenty-seven goals is a lot of goals and to be able to play with him and get more goals will be great.

“I’m a very physical striker and I’m also someone who likes to get goals when the opportunities come.

“But I’m also a big team player. I like to bring my team-mates into play and I’m all about winning. Sometimes I have to sacrifice myself for the win and that definitely defines me the most.

“For me, I’ve come from clubs that have won a lot as well, so the winning mentality that I can bring will just coincide with the Celtic way.”

The hitman, who has won almost 40 international caps for Turkey, has also played for Bury, Brighton and Sheffield United in England before sealing a move to Fenerbahce.

He has also had spells with Galatasaray and Bursaspor before switching from Turkey to Holland, initially joining Feyenoord on loan before making the move permanent last summer.

Now it’s a new challenge and a new experience for the player as he joins the Scottish champions and it’s something he is clearly ready to embrace.