INSPIRATIONAL skipper Scott Brown is on the brink of being offered a contract extension to keep him at Celtic for at least another two full seasons.

The 34-year-old Hoops midfielder has convinced boss Neil Lennon that it would be worth adding 12 months to his current deal that is due to expire in the summer of 2021.

Brown, who rejected a lucrative move to Australia at the end of the previous campaign, has been a revelation in the champions’ bid for nine in a row and played a key role in guiding the team to within 90 minutes of their TENTH successive domestic trophy with a powerhouse performance against Hibs in the Betfred League Cup semi-final on Saturday night.

Quite apart from scoring two crucial second-half goals in the 5-2 pummelling of the Edinburgh side, the former Scotland international was in the thick of the action right from kick-off to the end of stoppage-time. 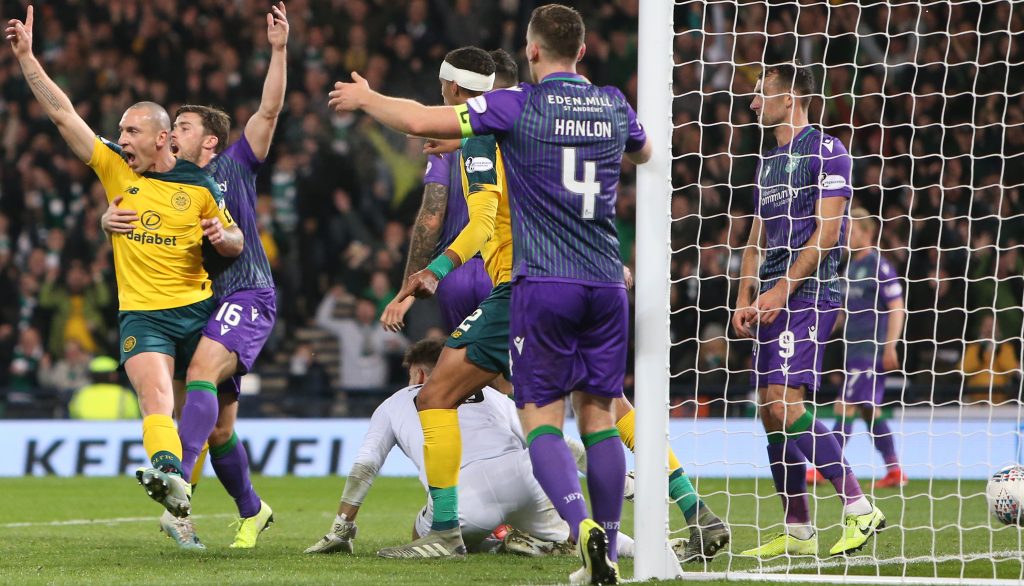 BROWN TO THE FOUR…Celtic skipper Scott Brown claims his first goal against Hibs.

The triumph – the club’s 30th unbeaten outing in domestic Cups – set up an intriguing silverware showdown with Steven Gerrard’s Ibrox side at the national stadium on Sunday, December 8.

And Brown will take a key role again when the Parkhead side take on Lazio in the Olympic Stadium in Rome on Thursday night in their Europa League Group E confrontation.

The team go into the contest leading their section with seven points after wins in Glasgow over the Italians and Cluj and a 1-1 draw against Rennes in France.

Lennon, speaking to the Daily Record, admitted: “He’s incredible. And I think he’s playing as well as ever.

“I look at Rangers away, Lazio, Hibs on Saturday, Aberdeen away and other games.

“He had a little bit of a toe problem at the start of the season, that was curtailing him. But he’s over that now.

FIVE ALIVE…Scott Brown lashes a left-foot effort past Chris Maxwell to make it 5-2.

“As for another contract, the way he’s playing at the minute, it might cost us a few bob!

“It will depend on how he’s feeling and how he’s playing at the time. I think he’s got another year after this one.

‘We’ll take a view of that maybe this time next year with him, as well. He’s in a good place and the players respect him and look up to him.

“He’s not in the team as a cheerleader. He’s in the team because he’s a bloody good player.

“And he keeps churning out consistent performances that we don’t take for granted.”