Celtic Quick News on News Now
You are at:Home»Latest News»NEW DEAL: FORREST TO THE FOUR
By CQN Magazine on 30th October 2019 Latest News

JAMES FORREST has agreed a new four-year contract with Celtic that will keep him at the club until at least the summer of 2023.

The 28-year-old winger has won 17 medals since making his debut in May 2010, including eight in the current run of league titles as well as five Scottish Cups and four League Cups.

The Scotland international star, speaking exclusively to Celtic TV, said: “I love it here. I came through the Youth Academy and every year I just enjoy it more.

“I’m absolutely delighted to extend my stay here and I’m looking forward to winning more league titles and Cups with the club.

“The last couple of years especially have been unbelievable. When you keep winning trophies it makes you eager and wanting to strive to win more. That pushes you on for more and I want to keep winning as much as I can.”

He added: “If you ask any player or member of staff, they all know how much the fans mean to the club and how big this club is. It’s great to be here, especially when you’re winning trophies and doing well, it’s a great feeling. 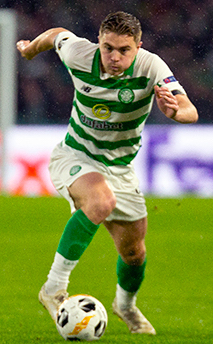 THE REAL DEAL…James Forrest in action.

“With the players the club signs it’s always competitive. Every few days you’re playing against a good team and bettering yourself while looking forward to European games, as well. I’m really happy to be staying here for a good bit longer.

He was introduced to the team by Neil Lennon first time around and was a key player for Ronny Deila and Brendan Rodgers before the return of the Irishman.

Forrest is likely to be in the thick of the action against tonight when St Mirren visit Parkhead on Premiership business and then his sights will turn to the Betfred League Cup semi-final against Hibs at Hampden on Saturday night.