The Greek giants could be willing to waive part of Vasilis Barkas’ £4.5million transfer fee to push through a speedy deal for the French midfielder.

The Hoops paid a record fee for a keeper when they moved for AEK’s international shotstopper in the summer – but it is unlikely all of the fee would have been paid up front.

Ntcham could now come into focus with his admirers prepared to reduce the outstanding amount or waive potential add-ons for Barkas who flopped so spectacularly in his first season in Scotland, according to a report in the Scottish Sun. 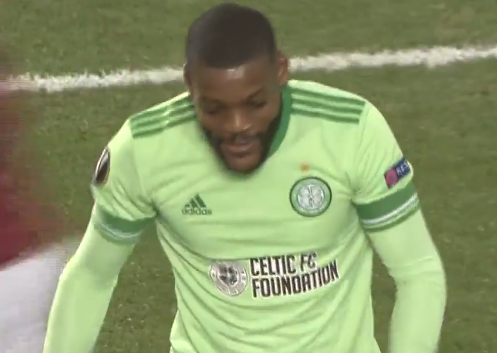 EURO OUT…Olivier Ntcham struggled in the 4-1 Europa League away loss against Spara Prague in November.

The former France Under-21 international midfielder, who also failed to make an impression at Marseille during his loan switch in the second part of the campaign, still has a year to run on his Parkhead contract.

He cost £4.5million in June 2017 when Brendan Rodgers signed him from Manchester City.

AEK are prepared to pay Ntcham, who made only 12 first-team starts and scored one goal last season for the Hoops, in the region of £20,000 per week which would make him one of the club’s top earners.

The 25-year-old playmaker is due to return for pre-season training at Lennoxtown in just under a fortnight with his future far from decided.