Under normal circumstances, Financial Fair Play (FFP) requires clubs to run at a financial break-even, with certain allowances and an acceptable deviation, over a three year period.  Money spent on youth or women’s’ football, as well as depreciation (which includes money spent on stadiums), are excluded from this responsibility.  A club, therefore, that makes a €10m annual loss while spending €11m on youth football, women’s football and depreciation, will have an FFP surplus of €1m.

The acceptable deviation is a €5m cumulative loss over three years.  However, if a club supplements its loss by “contributions from equity participants”, they are permitted to run an aggregate loss over the three years of €30m.

Due to the extraordinary nature of last years’ finances across football, the current monitoring period covers the last four years.  Clubs are also allowed to add back any lost revenue due to shutdown, playing behind closed doors, not playing at all, or for closed retail facilities.

See the graph below detailing a summary of Newco’s finances for the last four published accounts (year ending 30 June 2018 – year ending 30 June 2021).  Items on yellow are my estimates.  The Youth/Women add back figure is based on peer data from elsewhere and is generous to Newco.  The Shutdown add back is also based on peer data, adjusted for the number of cup games, absence of a refund programme and is also generous to Newco. 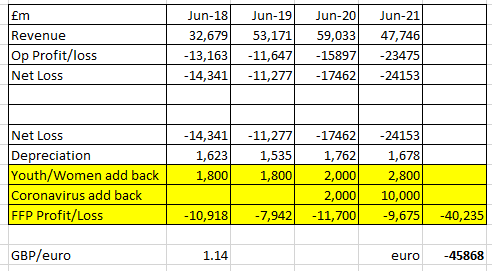 So where is all this right now?  Clubs submit accounts to Uefa along with their claims for spend on depreciation, youth and women’s football, and for this year, a Shutdown add back.  Newco do not specify these add backs in their accounts, but page 11 of their Annual Report states, “Initial estimates are that the adverse effect on revenues was over £20m”.

“Initial estimates” are doing a lot of heavy lifting here.  You can be sure that where I estimates last year’s hit at £10m, Newco’s signal of “over £20m” was consistent the figure they submitted to Uefa.  My expectation is that whatever they have claimed, it will be high enough to get them through the first pass.

Newco have run an operating loss every year they have been in business.  Persistent loss makers who compete in European football have more onerous FFP reporting responsibilities, I expect Newco to be under this scrutiny.  Claims made for add backs can and should be scrutinised by Uefa, who are well versed on how clubs that work at the margins operate.

What is going to happen?  Under normal circumstances, Uefa would act with instructions to reduce spending, or face severe action.  These are not normal times, though.  There is red ink all over European club accounts, many are unable to raise equity capital, even where permitted under FFP.

Uefa’s special provisions for this year are published and make no indication that we are in a free for all.  Clubs have experienced an income shock, some are unable to raise finance as a consequence, but there is no cover for persistent FFP deviants.  For the sake of “fair play”, we have to hope they apply the rules.  Your guess is as good as mine on what will happen, though.

What does all this mean long-term?  Newco cannot run at a loss of the scale they do under normal circumstances.  They either have to sell for the kind of money Celtic did this year and do so regularly, or reduce spending on wages (their only significant expenditure, as transfer spend is always low).  The £4.5m for Gerrard & Co. will only scratch the surface, they could do with selling another three management teams before June next year.

Champions League football next season is all.  It is literally everything, and you thought last season’s title was important.  The additional income would not resolve Newco’s structural problems, but it would give them a short-term stay of execution while they try to transition to a sustainable model.  Without it, the prognosis is dire, whether this season is a Uefa free for all or not.

………and remember, irrespective of FFP, they still need to fund those losses.  None of this is about defending corner kicks or putting the ball in the net, but appropriate financial governance wins more trophies than any tactical formation.