The bulked-up frontman claimed a well-desrved equaliser 17 minutes from time as it was honours even between the Hoops and their French opponents in the opening round of the Veolia Trophy in Lyon.

Klimala, a substitute for Odsonne Edouard at the start of the second-half, was rewarded for his refusal to give up as he chased down an opportunity deep in the Nice defence.

His effort, coming in his fifth appearance for the club, gave Neil Lennon’s men a deserved point.

More importantly, though, it gave the Irishman the chance to see two full teams in action in each half as the players tried to rid themselves of the lockdown rust. 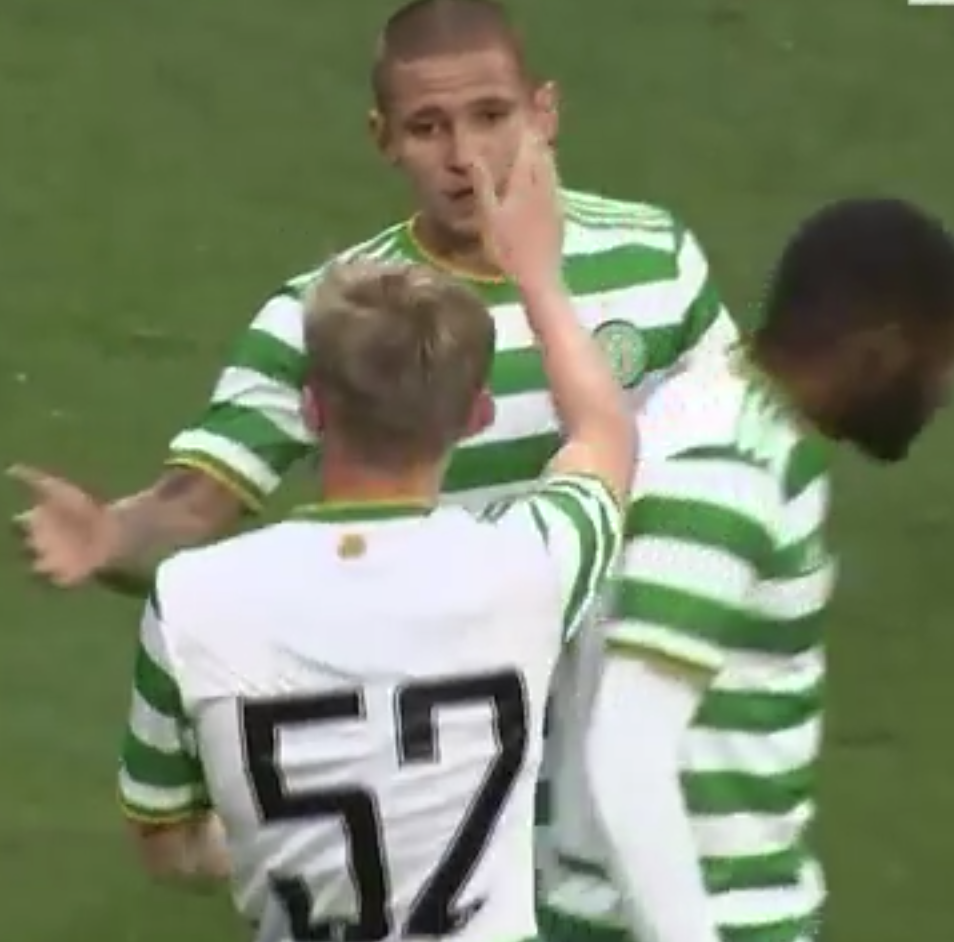 POLISHED OFF…Patryk Klimala is congratulated by Euan Henderson and Olivier Ntcham after his strike.

In the fourth minute, the Hoops were robbed of the opening goal after Edouard had nonchalantly swept around the keeper and placed the ball in the inviting net.

The move had started when Mohamed Elyounoussi weaved his way in from the left to knock a pass in front of Ryan Christie. The ball broke off a home defender and fell into the path of the team’s dangerman.

However, Edouard’s joy was short-lived when VAR decreed he was offside. It was a preposterous decision with the Celt being played onside with the ball arriving at his feet via a Nice defender.

It was a signal of intent, though, from the nine-in-a-row champions who had camped in the home side’s half in the opening minutes of the encounter.

Edouard tested Walter Benitez later with a deflected free-kick, but the netminder held on well at his right-hand post.

And then it was the team’s talisman threatening again in the 15th minute when Greg Taylor slung in an inviting left-wing cross, but his header was way off target.

Scott Bain, wearing the No.29 shirt, was wrong-footed by a deflection off Elyounoussi, but the ball cleared the bar for a corner-kick that was cleared.

In the 25th minute, Taylor and Edouard combined again, but the striker’s final shot was wayward and didn’t trouble the opposing keeper.

The Hoops remained on the ascendency and in the 35th minute Christie, raiding on the right, cut in onto his left foot, but his drive was rising all the time as it cleared the crossbar.

However, the Hoops were hit by a classic suckerpunch in the 39th minute when Nice took the lead – and boss Lennon would have been left fizzing at his defence for their failure to repel the danger.

Lively stiker Kasper Dolberg exposed the retreating defence in a breakaway from the French on the left. He cut inside past Christopher Jullien, drifted away from James Forrest and Kristoffer Ajer was too swift to go to ground and was left floundering.

The Dane was allowed to steady himself on the edge of the box and he slid a low drive away from the helpless Bain at his right-hand post.

The rust was obvious, but, to be fair to the Scots, it was their first game since the 5-0 Premiership victory over St Mirren on March 7 and this evening’s opponents already had a couple of matches before this clash. 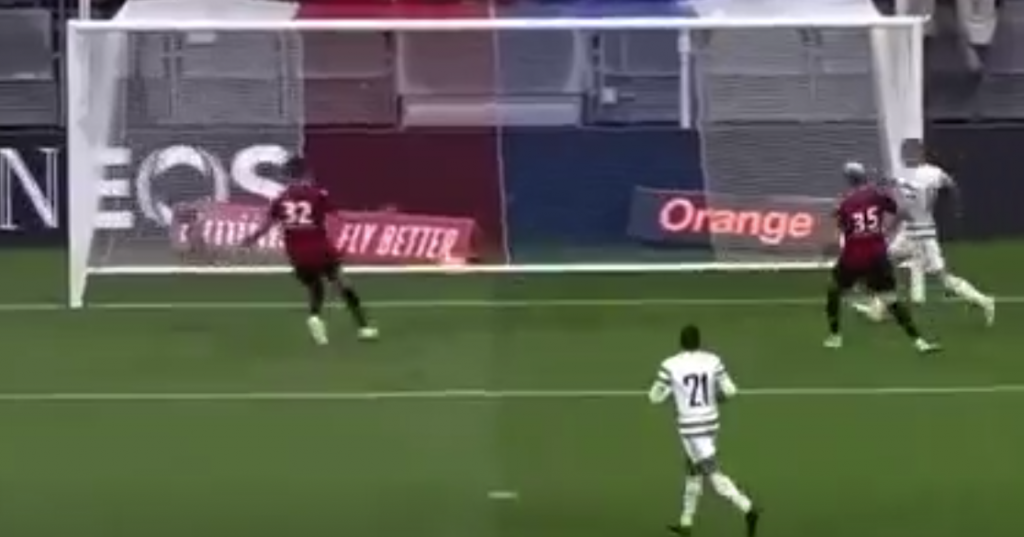 THE EQUALISER…Patryk Klimala capitalises on a mistake by the Nice keeper to score.

The visitors had already been warned of the speed on the rebound of the French when the hard-working Elyounoussi cleared a dangerous cross from the right and, just before the interval, Bain was called upon to push away a goalbound effort.

Lennon sent out the same eleven for the start of the second-half as skipper Scott Brown exhorted his team-mates for extra effort at the restart.

Three minutes later, Christie had a horrendous miss when he was sent clear on a perfect through ball from Edouard. The playmaker, scorer of 19 goals last season, was completely unmarked as he raced in on Benitez.

Under no pressure, he switched the ball to his left foot and, with everyone anticipating the net bulging behind the exposed keeper, he inexplicably curled the ball wide of the upright. It was a truly astonishing howler from the Scotland international.

Christie tried to atone a couple of minutes later when he turned a Forrest right-wing cross goalwards from eight yards, but Benitez was alert and got down swiftly to save.

Conor Hazard, Nir Bitton, Olivier Ntcham, Boli Bolingoli, Patryk Klimala, Ismaila Soro, Hatem Abd Elhamed, Scott Robertson, Stephen Welsh, Karamoko Dembele and Euan Henderson were among a spate of substitutions made by Lennon just after the hour mark as he changed his entire starting line-up in attempt to give his squad some game time. 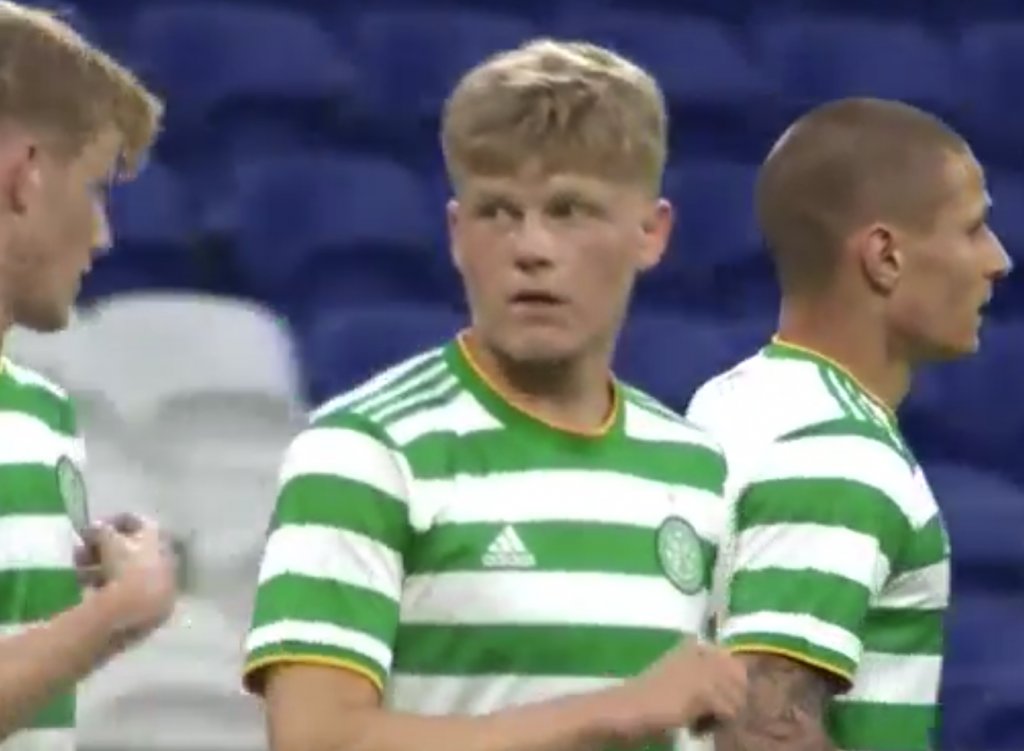 The Hoops put together a sweeping 10-pass movement that opened up an opportunity for Ntcham inside the box, but his drive was blocked and booted to safety.

But a goal just had to come and it arrived in the 73rd minute after some hard graft by the new, improved Klimala.

Elhamed played his part as the ball was moved upfirled and it looked as though the Nice substitute keeper was in control of the situation.

But the £3.5million Polish hitman refused to give up the chase and intercepted the pass out of defence by the netminder. Klimala strolled on before rolling the ball into the net.

It could be the start of many.