Celtic Quick News on News Now
You are at:Home»Latest News»NO ARGUMENT: WHY IT IS PREPOSTEROUS NOT TO AWARD CELTIC THE TITLE
By CQN Magazine on 14th March 2020 Latest News

THE last time the Scottish leagues were suspended was during World War II when season 1939/40 was shut down.

Football in the old First Division went into cold storage for seven years and resumed in 1946/47.

There have been curious reports stating Rangers were top of the league at the time and were not awarded the title when football was forced to come to a halt.

It is accurate to state the Ibrox club were on top of the division when the outbreak of the worldwide conflict saw the 50th season of Scottish football brought to an abrupt conclusion.

It is also accurate to point out only FIVE top-flight games had been played before the order of suspension was made on September 13 1939.

Celtic, of course, are presently at the Premiership pinnacle after THIRTY matches, with only eight outings to go.

Back in 1939, Rangers were a mere ONE point ahead of Falkirk as they sat on nine points.

Celtic are THIRTEEN points in front of their nearest challengers, Steven Gerrard’s Ibrox outfit who have a game in hand.

It’s obvious, then, that there is absolutely NO WAY anyone can make any sort of cogent argument that Rangers were robbed of a championship all those years ago. 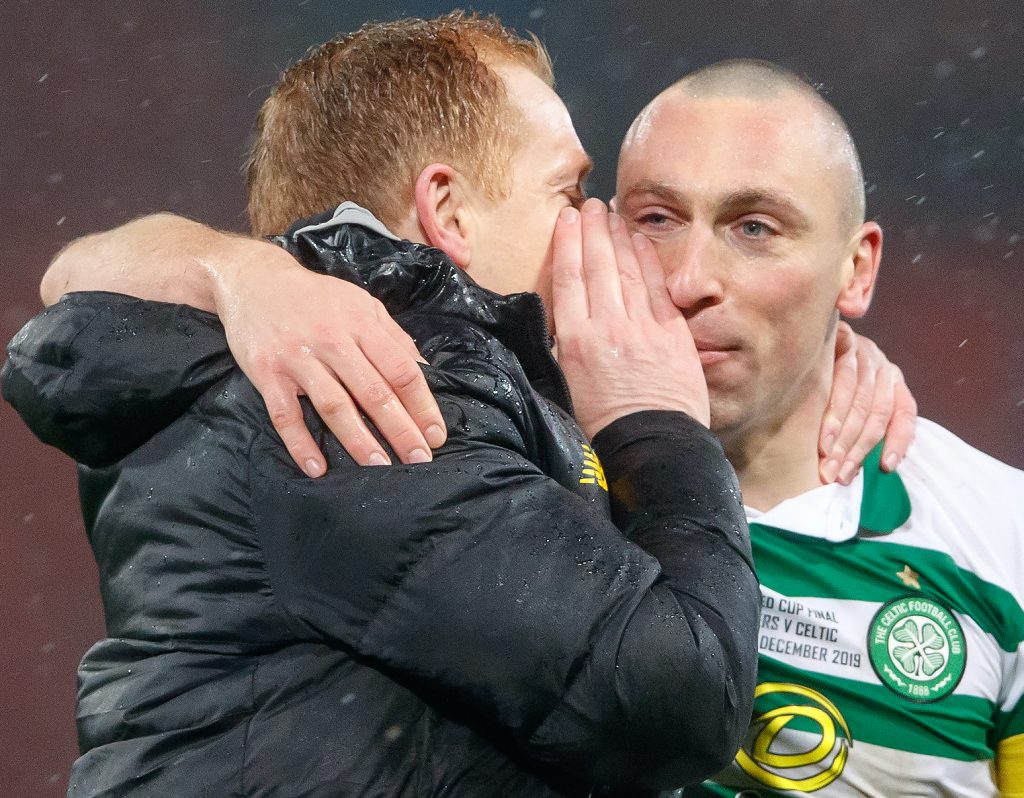 “HEARD THE ONE ABOUT…they might not award Celtic the title?” Neil Lennon shares a joke with Scott Brown.

Neil Lennon’s team beat Hamilton Accies 1-0 courtesy of a James Forrest goal in their fifth Premiership encounter of this term back on September 14 last year.

Had the coronavirus pandemic made an earlier invasion on humanity six months ago and football had been compelled to come to an unscheduled stop, no-one in their right mind woulld have declared Celtic as champions at that time.

For the record, the eight-in-a-row title kings were top of the league with 15 points, three more than Gerrard’s side plus Lennon’s outfit had a superior goal difference of EIGHT.

Back in 1939, a Scottish League committee was established to explore the possibility of setting up emergency regional leagues which would provide football with restricted travel to venues. 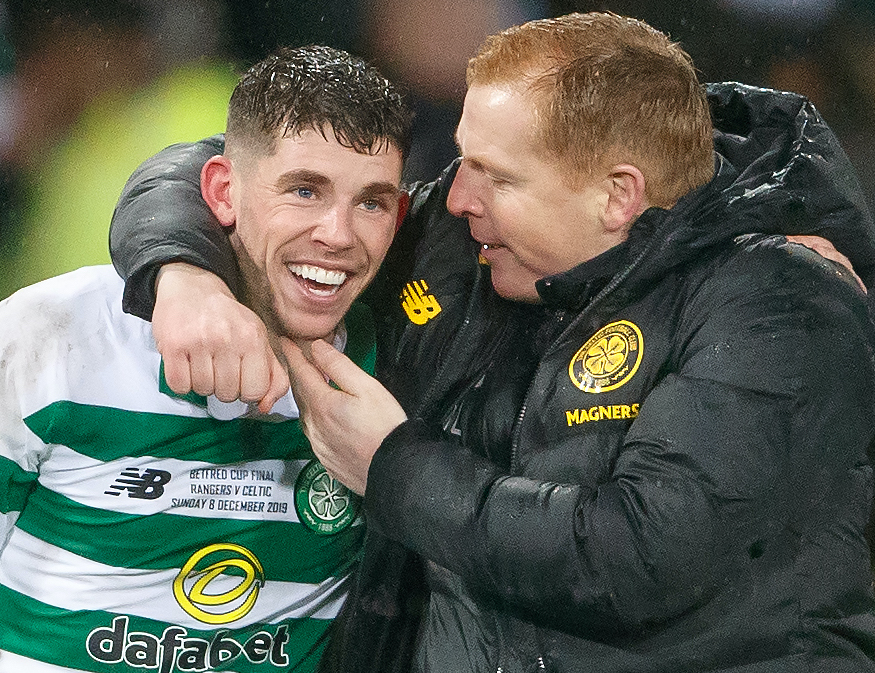 “HEARD THE ONE ABOUT…they might declare the league season null and void?” Neil Lennon and Ryan Christie can afford to smile.

The two emergency leagues were split geographically into Eastern and Western Divisions, comprising 16 teams each. Rangers won the West Division with Celtic well off the pace in 13th position. Falkirk lifted the Eastern title on goal average from Dunfermline.

There was a play-off at Ibrox on June 1 1940 with the home side beating their Brockville opponents 2-1. Some misguided souls have attempted to claim this as a championship victory for the Govan side. To be fair, the club have never been that confused.

To emphasise the absurdity of the situation, that would be like the Premiership being split into two this time around and Hearts clinching the Eastern Division and then winning the play-off. 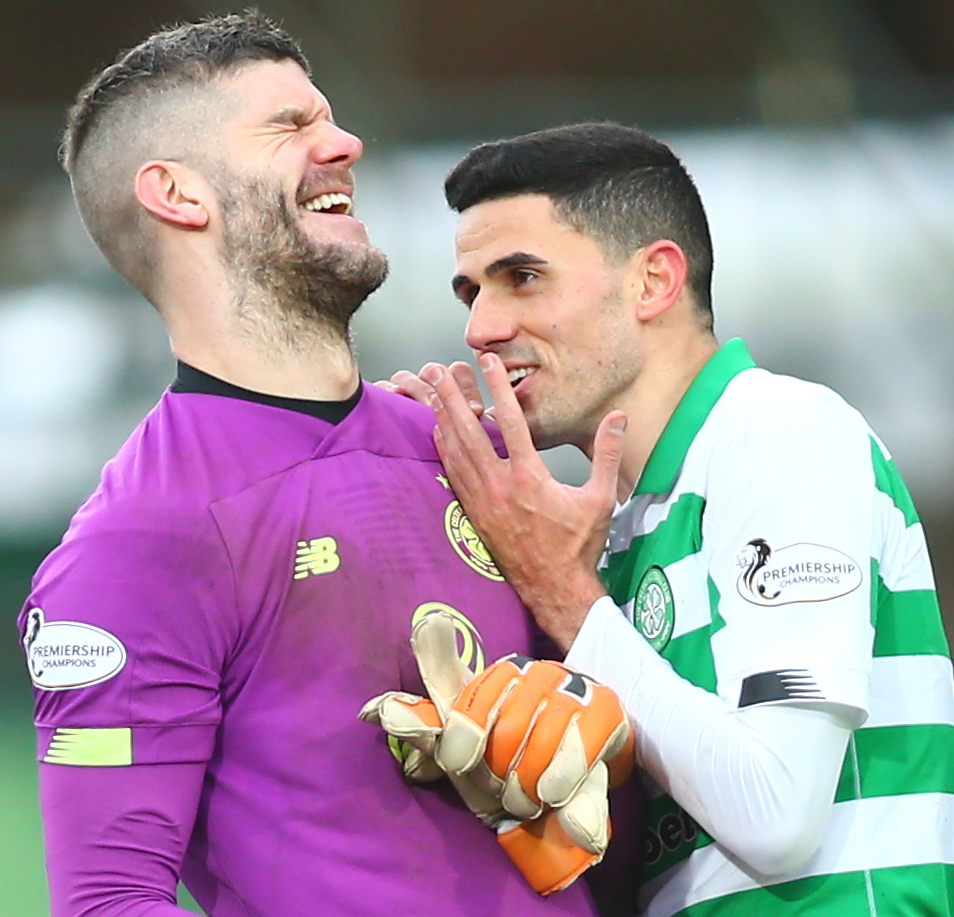 “HEARD THE ONE ABOUT…13 points is not enough of an advantage to be granted nine in a row?” Fraser Forster and Tom Rogic have a laugh.

Not even someone with a single digit IQ would reckon that would make the Tynecastle club champions of the country. That would be the same Hearts team that currently prop up the Premiership on 23 points, four adrift of Hamilton Accies.

So, the Scottish football rulers will surely be more than aware that there are NO precedents, NO comparisons and NO parallels.

If football does come to an unfortunate premature conclusion – and everyone at Celtic hopes that will not be the case – then there is no decision to make.

Celtic are worthy champions – award them a deserved crown without a moment’s hesitation.