Celtic Quick News on News Now
You are at:Home»Latest News»NO EXCUSES FROM BROONY
By CQN Magazine on 13th May 2019 Latest News

BATTERED and bruised Scott Brown believed Jon Flanagan should have been red-carded for a brutal assault when he thrust his elbow into the Celtic skipper’s face, as CQN reported yesterday.

However, the midfielder made NO excuses for an abysmal, below-par performance from the champions which was labelled “unacceptable” by interim manager Neil Lennon, as CQN also reported.

The eight-in-a-row title kings produced another woeful showing at Ibrox where they were overrun for the second time this season as they followed December’s 1-0 loss with a 2-0 defeat.

It was another disjointed, disturbing display from the Hoops who have thrown away six points to rookie gaffer Steven Gerrard in five months.

As far as the crown goes, it means nothing with the flag already secured in last week’s 3-0 triumph over Aberdeen at Pittodrie. As far as pride goes, though, this latest offering left a lot to be desired.

The team, without the qualities of the injured Kieran Tierney and James Forrest, gifted an early opening goal to a James Tavernier deadball effort and Scott Arfield wrapped it up after the hour mark with another simple goal that exposed the defence’s soft centre.

Brown, speaking to the Daily Record, said: “We didn’t start well. The game plan didn’t go well after two minutes. It was a great free-kick, to be fair. One of those deliveries that, if somebody gets a nick, it’s going in anyway. 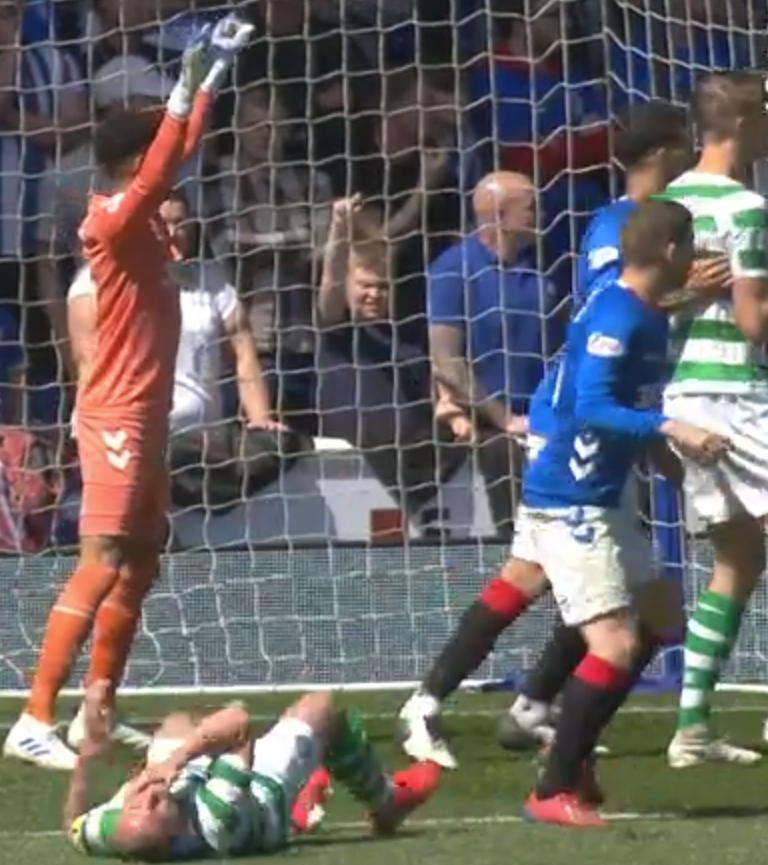 FLOORED…Scott Brown hits the deck after getting an elbow in the face from Jon Flanagan.

“I think Rangers deserved the victory more than we did because we didn’t compete, we didn’t press as well as we could have done.

“Rangers were better, we didn’t start well, we didn’t follow our game plan, didn’t press as hard as we could, didn’t play as well as we should.

“There’s always a motivation to come here. The last two games here, we’ve not played as well as we should have done.

“These things happen now and then, but it shouldn’t happen, especially coming here.

“We needed to win the battle before we could play, but we didn’t start well and gave them the upper hand after two minutes.

“But we’ve got a league title, we’re going to, hopefully, win a treble and that, hopefully, puts a lot of smiles on a lot of fans’ faces.

“We’ve got a Cup Final to look forward to, Hearts in the final Premiership game of the season and the chance to pick up a trophy. We’ve got to put those smiles back on everyone’s faces as this wasn’t the best.”

Brown, 33, added: “It’s our first defeat since here last time, so you look at the season we’ve had, it’s been fantastic.

“The season is not based on one fixture, one game. It’s based on how well we’ve played all season.

“We’ve dominated the league for the last eight years. We need to make sure we continue to do that, do it in the Cup Final and then next season, as well.”