CELTIC’S reported interest in attempting to bring back Fraser Forster doesn’t look like getting off the ground, as CQN reported yesterday.

Claims from across the border stated the Hoops were planning a season-long loan deal for Southampton’s six times-capped England international keeper.

The former Parkhead fans’ favourite snubbed a return to Glasgow last summer in an effort to prise the No.1 position away from Alex McCarthy at his parent club.

A year down the line, the situation has not altered. Forster, 33, who is going into the final year of his £72,000-per-week deal at St Mary’s, is prepared to again battle for the gloves at the south coast outfit. 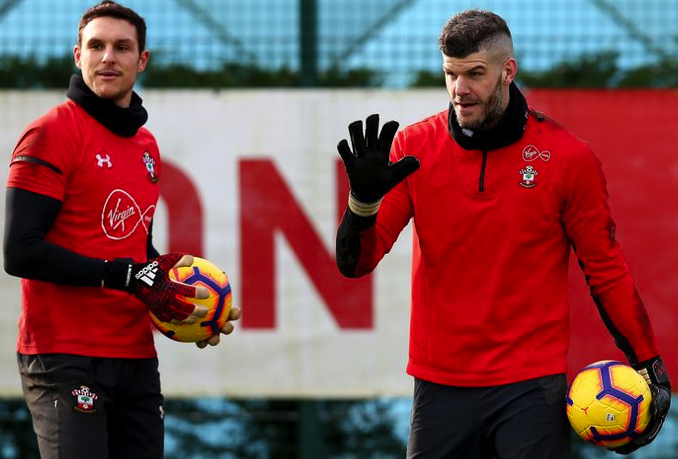 TWO OF A KIND…Alex McCarthy and Fraser Forster will duel once again for the No.1 spot at Southampton.

Manager Ralph Hassenhuttl will offer the towering netminder another opportunity to make the top spot his own in the upcoming campaign, according to local media Hampshire Live.

They also state the Saints have three first-team squad shotstoppers on their books and only 23-year-old Harry Lewis will be allowed to leave on a temporary transfer.

Hasenhuttl has insisted Forster, who made eight league appearances last time out, and McCarthy would be retained for the programme ahead and told local newspapers: “I think both still have one year left on their contracts and I expect both to stay, going into next season with a battle in pre-season for who is then allowed to start.

“That should normally lead to a better performance from everybody.”

Vaslis Barkas, who played the opening half of the 1-0 weekend loss to Preston before being replaced by Scott Bain, is likely to be first choice for tomorrow night’s Champions League second round first leg qualifier against FC Midtjylland at Parkhead.