Celtic Quick News on News Now
You are at:Home»Latest News»NO GUARD OF HONOUR AT IBROX
By CQN Magazine on 7th May 2019 Latest News

CHAMPIONS Celtic will NOT receive a guard of honour before their derby encounter at Ibrox on Sunday.

Steven Gerrard’s Govan outfit have no intention of lining up before the noon kick-off to pay tribute to the Hoops for winning eight successive titles, according to a report in the Sun.

Teams traditionally applaud the title winners on to the pitch after they have won the league, but it appears this will not be happening on this occasion.

Two seasons ago, Kilmarnock, then managed by ex-Ibrox midfielder Lee McCulloch, lined up their players to applaud the title kings on before the game at Parkhead which the home side won 3-1.

Hearts formed a guard of honours last year, but, as CQN pointed out at the time, only one of their players, goalkeeper Jon McLaughlin, actually bothered to clap his hands while his team-mates steadfastly kept their arms at their sides. The Hoops triumphed 3-1 to make sure they weren’t celebrating at full-time, either.

The frontman, now with Killie, said: “I think it would be the right thing to do. I think Rangers would make a statement about what type of club they are if they did it.

CLAP HANDS…Killie players sportingly applaud Celtic onto the pitch in 2017. 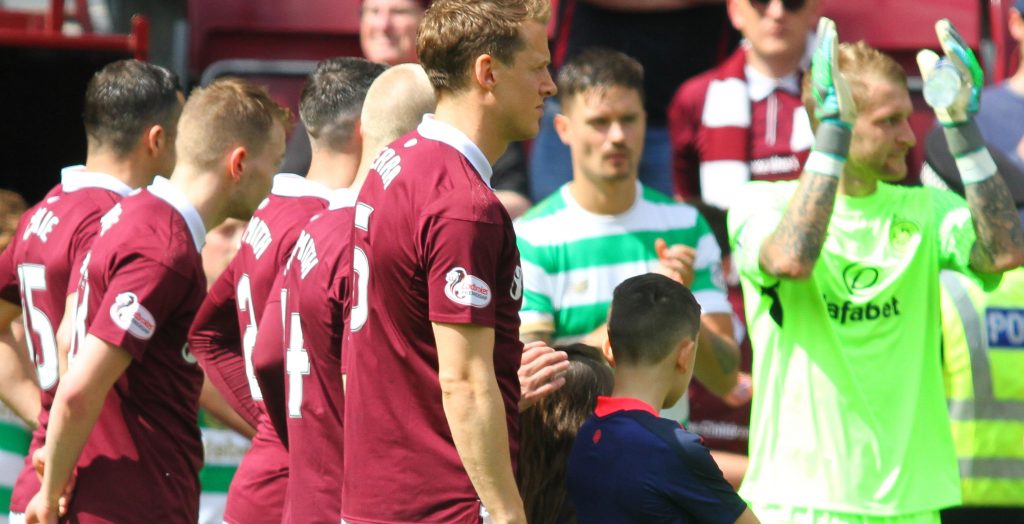 NO CHEERING IN THE CAPITAL…Hearts players line up, but do not applaud last year.

A SOLITARY ROUND OF APPLAUSE…goalkeeper Jon McLaughlin shows some class by putting his hands together for the champions.

“Over the years, it has always been the case that Rangers have held themselves in high regard and rightly so, because of the way they have conducted themselves.
“It would be the right thing to do and, for me, I think they should.

“They might be your rivals, but they have won the league. Pay them the respect they deserve.

“I get the view of the fans. I get people asking why would you want to clap your rivals on to the pitch.

“But be the bigger man and do what’s right. That would be to give Celtic a guard of honour.

“They have won the league, they are the champions so, for me, why would you not?

“I understand fans might be frustrated, but it’s not the end of the world if you clap someone going on to a pitch.”

The Hoops, of course, claimed their eighth crown on the spin at Pittodrie on Saturday when they overcame Aberdeen 3-0 with goals from Mikael Lustig, Jozo Simunovic and Odsonne Edouard.

They are now one flag triumph away from the record set by Jock Stein’s great Celtic side that won nine consecutive championships from 1966/67 to 1972/73.

The Premiership success in this campaign is the FIFTIETH in the club’s history.