Celtic Quick News on News Now
You are at:Home»Latest News»NO GUARD OF HONOUR: ‘I DON’T SEE IT AS A BIG ISSUE,’ KENNEDY
By CQN Magazine on 19th March 2021 Latest News

JOHN KENNEDY has confirmed there will be no guard of honour when Celtic face Steven Gerrard’s Ibrox side at Parkhead on Sunday.

The Hoops interim manager ended the possibility of their opponents being applauded onto the field for the midday kick-off.

The game got the official go-ahead from the Scottish government earlier today and it will be business as usual as the Glasgow neighbours meet for the third time this season.

Former Hoops boss Brendan Rodgers, who led the team to two of their nine successive championships, urged his former club to show “humility and class” by paying the tribute to their visitors who have won their first title in a decade, as CQN reported earlier this week.

The Govan outfit refused to give newly-crowned Celtic a guard of honour when they arrived at Ibrox as league champions in May 2019. 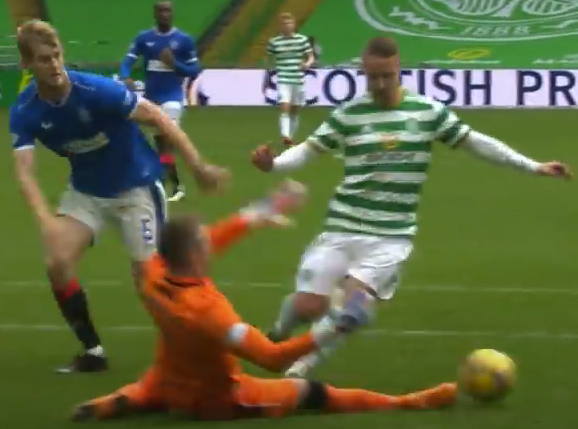 DANGERMAN…Leigh Griffiths rounds keeper Allan McGregor as Filip Helander looks on, but the chance was lost as Celtic went down 2-0 in October.

Kennedy, speaking to Sky Sports News, said: “It is something that we have discussed. It is a subject that has been brought up and I have seen several people talking about it.

“It was the same two years ago when we were champions and, if I am being honest, I don’t think such a fuss was being made about it. I don’t see it as a big issue.

“For us, we spoke collectively about it and we won’t do it. It is not about lacking class, nothing like that, because we are a club that always shows class and dignity and do what is right.

“But, ultimately, this same group of players went in as champions and didn’t get the respect that time, if you want to call it that.

“They are the same players who are being asked to stand there. We have decided collectively as a group. We will just get on with the game, park that, so we will focus fully on the game and just put that to bed.”

Kennedy will be hoping for better fortune against Gerrard’s men than that enjoyed by his predecessor Neil Lennon. A powederpuff performance in October brought a wretched 2-0 defeat and the team dominated for an hour in the January 2 game away from home until Nir Bitton was red carded and Callum McGregor deflected a right-wing corner-kick beyond Vasilas Barkas.

Astonishingly, the home side picked up all three points on an afternoon where they did not have a solitary attempt on target.