BILLY STARK insists “there will be no hiding place” for Celtic players if they fail for a third time against Steven Gerrard’s Ibrox side at Parkhead on Sunday.

The faltering Hoops have lost 2-0 in the east end of Glasgow in October and 1-0 in Govan in January as they have relinquished their nine-year grip on the title.

It’s been a calamitous campaign for the home side who have dropped 28 points – a disastrous EIGHTEEN more than last term – and go into the midday weekend fixture 20 points adrift. The inexplicable collapse cost Neil Lennon the manager’s job last season and John Kennedy will take charge of the team in an interim capacity for the third time on this occasion.

Stark, who was a Celtic Centenary hero when Billy McNeill’s side won the league and Cup double in 1988 to mark their 100th year, believes the players will be motivated to go out and wreck the visitors’ unbeaten league record.

DOWN AND OUT…Billy Stark (extreme right) is grounded after a red-card tackle from Graeme Souness who is about to be dismissed by referee Davie Syme. Stark scored the winner at Parkhead in August 1987.

Pride is at stake as the Hoops focus on clawing back some dignity and the midfielder said: “If you lose an Old Firm game then you have to retreat into your bunker for a week!

“I’m glad social media wasn’t about when I played.

“That means there will be no hiding place for players even if there are no fans in the stadium.

“There’s plenty of motivation for Celtic – taking away Rangers’ unbeaten record, winning on their own turf, stopping the chances of a clean sweep over them.

“So, the pressure this weekend is more on Celtic. Supporters will expect them to win the game.

“No matter the state of play, both sets of supporters expect that but for the Celtic fans they will be determined to see their side stop Rangers’ unbeaten run.”

Looking back at 1995/96 when he was assistant manager to Tommy Burns, Stark, speaking to the Daily Record, added: “We managed to go through the campaign losing just once. 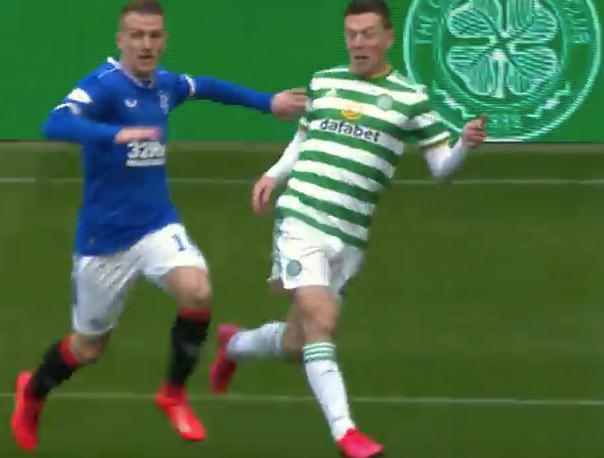 SHOVE OFF…Callum McGregor and Steve Davis in a tussle for the ball in October.

“Brendan Rodgers went the full way with his Invincibles team. Now Steven Gerrard could repeat that.

“It’s an incredible feat. When you evaluate it, it’s staggering because so many things through a campaign can go against you.

“That’s all part of being a Championship winning team and Celtic must find a way of overcoming that on Sunday.

“Rangers have found form again, but Celtic have the players to win the game, there is no doubt about that.

“As always, discipline is key because in recent derbies there have been red cards which have changed the nature of the game.”

The Hoops dominated the opening 60 minutes of the encounter at Ibrox shortly after the turn of the year, but the sending-off of Nir Bitton turned the match upside down and an own goal from Callum McGregor shortly afterwards summed up the fortune of Scotland’s title kings.

They will get the opportunity to atone on Sunday.