BRENDAN RODGERS has promised Steven Gerrard he can count on his support if he takes the Ibrox manager’s job.

But the Celtic boss warned he won’t show any mercy on the pitch to his former Liverpool skipper.

Rodgers, who can clinch the Hoops’ seventh successive title against the Govan outfit at Parkhead tomorrow, admitted he was surprised Gerrard had emerged as a favourite to take the post from caretaker gaffer Graeme Murty.

Asked if it would be difficult facing his former Anfield player, Rodgers replied: “Not really. My focus is on Celtic. I respect all managers.

“You look at football management and you see the glory of it, but it is a hard business as a player and as a coach and manager.

“I always have empathy for managers, but, of course, my focus is clearly Celtic.

“I have had it with Garry Monk when I was at Liverpool and he was at Swansea. We crossed paths. The relationship changes over time.

“You are the manager there, you are directing and leading and then they make the steps into management and there is a friendship there and there is always a support.

“For me, it doesn’t matter if I worked with them or not. I always tend to reach out to coaches and managers, especially in those early stages because it is very tough. The expectation on modern football is huge.

“Stevie and I were close at Liverpool. I had a good relationship with him, similar to what I have here with Scott Brown.

“The synergy between the manager and the captain is very important. But I haven’t spoken to Stevie for a little while, so it is all speculation. I am sure the guys on the Rangers board know what they are doing and will go from there.” 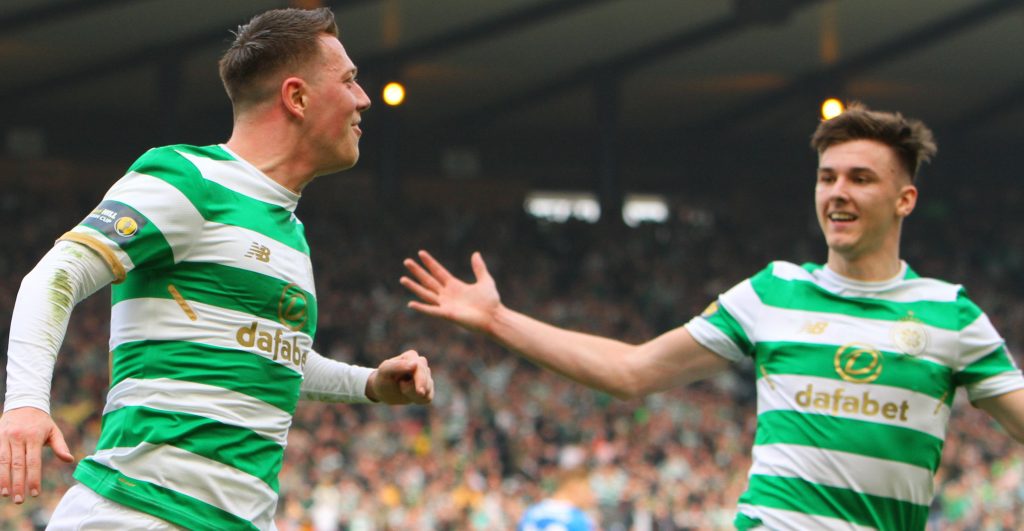 GOALDEN BHOYS … Callum McGregor celebrates his strike against the Ibrox side two weeks ago with Kieran Tierney joining in.

Speaking of the Gerrard links to the Ibrox team, Rodgers added: “I was a little bit surprised when I saw it.

“If the speculation is right then maybe Stevie feels it is the right club. I know Steven very well and I know he wants to manage at some point. When it’s your first time it’s not necessarily about a club, it’s about the right club.

“When I took my first job I was coaching for 15 years and I had worked with kids at six years of age right through to the very best players in world football at the time at Chelsea.

“I felt then I was ready to manage and it was just a case of finding the right club. I had a number of possibilities, but Watford came along and it was right. Why? Because they have a history of giving young managers an opportunity, right the way back to Graham Taylor.

“I was following in the footsteps of Aidy Boothroyd who had been taken in when in his mid-30s and had done a great job in getting them promoted. And what I knew was the club was pretty stable, the supporters were great, they gave you an opportunity, recognised as a young manager you needed support.

“It wasn’t any club for me to manage, it was the right club. That was what was going to be important for me in the first steps of management because all the statistics show lots of managers get their first job and there is a high percentage, it seems to go up every year, who maybe don’t get another chance.”