Celtic Quick News on News Now
You are at:Home»Latest News»‘NO-ONE IS GOING TO PUT ME DOWN’, JULLIEN’S MESSAGE TO MORELOS
By CQN Magazine on 5th September 2019 Latest News

CHRISTOPHER JULLIEN accused Alfredo Morelos of stamping on his foot at Ibrox on Sunday – and admitted it just made him all the more determined to make sure Celtic took all three points.

The controversial Colombian striker, who was red-carded against the Hoops after smashing an elbow into the face of Scott Brown in the champions’ 2-1 win at Parkhead in March, came on as a second-half substitute for Jermain Defoe in the visitors’ 2-0 triumph.

The hot-headed hitman, who was sent off FIVE times last season, was determined to make his mark one way or another against a team he has yet to score against in TEN attempts.

Jullien was clearly upset at an incident as the defender lined up with his team-mates at a set-play from the Ibrox outfit.

The £7million Frenchman refused to lose his concentration after the sly attempt to disrupt his Man-of-the-Match performance.

Jullien, speaking to the Daily Record, said: “That’s the game. He is a good player and one who tries to use a trick to disturb a defender. He stamped on my foot, but that’s part of football. 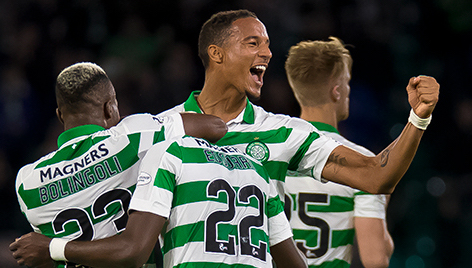 “Sometimes the crowd can make more of it, but, as I say, it’s part of the game. I said to him after he stamped on my foot: ‘You can come more and more for more than one time. The more you come at me, the more the zero stays on that scoreboard’.

“If I am still on the field and if I can stand up, I am going to say what I can say. I just said to him: ‘Come to me and we’re going to have a fight, for sure. But with me it’s going to come from within, from my heart. I will be ready’.”

“But some need players to fight. Our first job is to defend and sometimes we have to show some strength.”