Celtic Quick News on News Now
You are at:Home»Latest News»‘NOT OVER YET,’ ROSENBORG SKIPPER
By CQN Magazine on 28th July 2018 Latest News

ROSENBORG skipper Mike Jensen has warned Celtic their Champions League qualifier is not over yet.

The Hoops travel to Trondheim on Wednesday for the second leg tie with a 3-1 advantage following their triumph at Parkhead in midweek.

Brendan Rodgers’ side were given an early scare when Birger Meling scored the opener, but two goals from Odsonne Edouard and a spectacular effort from his French team-mate Olivier Ntcham handed the Hoops the advantage.

But Danish international defender Jensen is convinced his team are still in with a chance and they plan to blitz the champions. 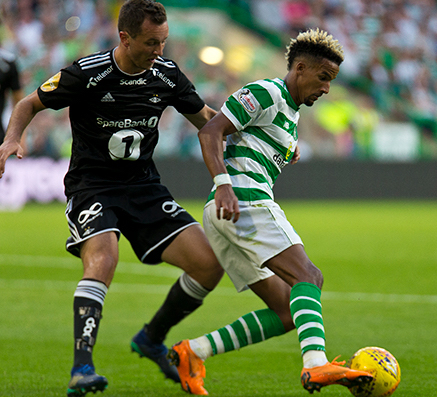 ON THE BALL…Scott Sinclair in action against Rosenborg.

He said: “We are at home and it is entirely up to us to go for it.

“None of us believes we are out. We have faith that we can go and beat Celtic on our own soil and do enough to qualify.

“If we score first, we will have a very good chance. I hope our fans turn out and give us good backing.”

Celtic knocked out the Norwegians from the qualifiers last year when a goal from James Forrest in Trondheim proved to be the winner.