NEIL LENNON is positive Celtic can win Europa League Group E, starting with a good result against Rennes in the opening encounter in Brittany tonight.

But he Hoops boss also conceded ANY of the four teams, including Serie A outfit Lazio and Champions League conquerors Cluj, could top the section.

Julien Stephan, coach of the French Cup winners, has stated the Italians and Scots are favourites to go through.

But Lennon, speaking to the Evening Times, said: “I wouldn’t say you could throw a blanket over the four teams, but there is pretty much nothing in it for me.

“Every team will take points off each other as it goes on.

“Yes, they lost to Slavia Prague who got a great result – a 1-1 draw against Inter Milan – in the San Siro the other night, but in the away game against them they could easily have equalised. 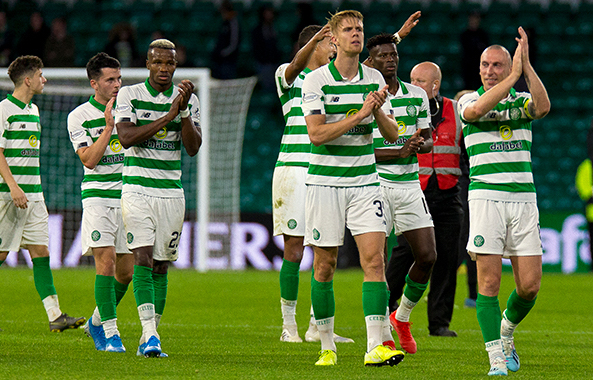 CHEERS…Kristoffer Ajer and Scott Brown lead the applause after the win over AIK Stockholm.

“They have a different way of playing that is maybe not easy on the eye, but it is effective and they will maybe give someone a bloody nose along the way.

“Rennes are second in Ligue 1, so their quality is obvious.”

“We’ve earned the right to be in the group by playing a lot of good football so far. But nothing’s guaranteed.

“We’re very well motivated for the game, but we know how difficult a test this is going to be.

“We’re always looking to improve our away record in Europe and this is the next test for us.”

The Hoops kicked off their Euro campaign with a 3-1 against FK Sarajevo in Croatia in July, they beat Nomme Kalju 2-0 and, in their last away game, thrashed AIK Stockholm 4-1.