Celtic Quick News on News Now
You are at:Home»Latest News»‘NOW FOR THE NEXT 100,’ GRIFF
By CQN Magazine on 31st August 2018 Latest News

CELTIC’S Ton-Up Bhoy Leigh Griffiths can’t wait to get started on his second century of goals for the Parkhead men.

The livewire striker swept in a majestic free-kick for his 100th Hoops goal in the 3-0 victory over FK Suduvu last night to fire Brendan Rodgers’ men into this morning group stages draw.

Now Griffiths has Steven Gerrard’s Ibrox side in sharp focus as they arrive in the east end of Glasgow on Sunday for the High Noon shoot-out.

The 27-year-old Scotland international claimed his place in the history books and is now the 29th player in the club’s history to achieve the feat.

He said: “To get the 100th goal is a big relief and obviously I’m delighted. It’s another milestone and I just want to kick on now. 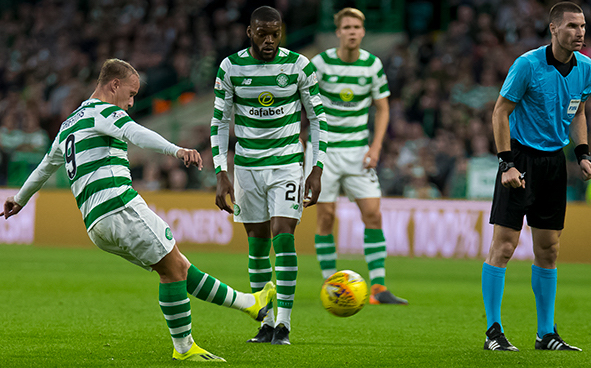 CENTURY BHOY…Leigh Griffiths sweeps in the free-kick that claimed his 100th strike for Celtic. Olivier Ntcham and Kristoffer Ajer – and the referee – get a close-up view of his technique.

“The last person to do it was John Hartson, so I’m in good company, but I can’t rest on that. I need to keep moving forward and try to score as many goals as I can.

“Not a lot of players have scored 100 goals for a club like Celtic, so to be in that kind of company is great and I just want to keep scoring goals.

“I thought the 100th goal was never going to come, but I just had to bide my time, keep chipping away and making chances for myself. I knew it would eventually come.”

Griffiths scored No.98 back on April 8 with a slick header against Hamilton Accies which gave Rodgers’ outfit a 2-1 win over Martin Canning’s side.

The smart money was on the hitman notching the magical 100 before the end of the campaign, but the landmark goal proved to be elusive.

He notched the ninety-ninth in the 3-1 Betfred League Cup triumph over Partick Thistle three games ago before pulling the trigger last night to join the elite band of Celtic master marksmen.

Now Sevco Rangers are on Griffiths’ radar and he said: “That’s two clean sheets on the bounce and we need to move forward now. We’ve got a big game coming up on Sunday and big players always turn up. 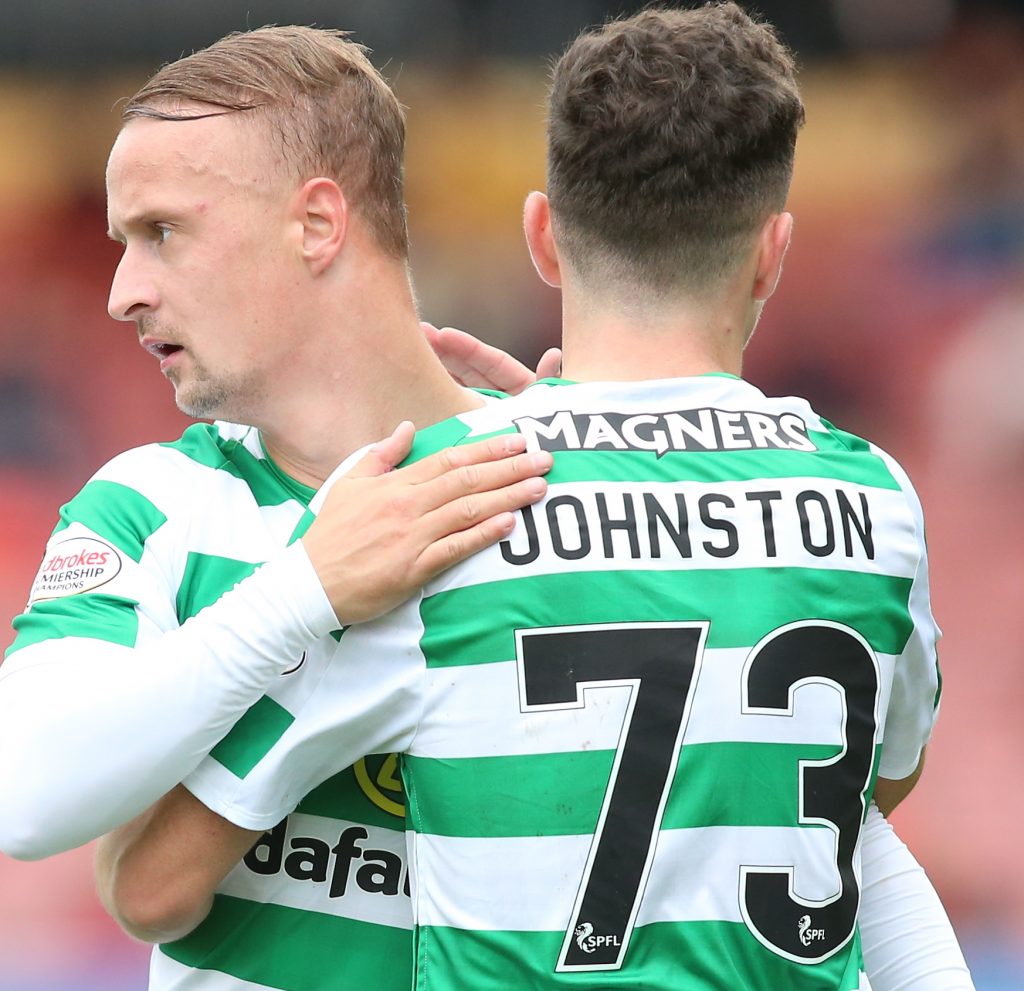 MAGIC, JOHNSTON…Griffiths shares his joy with young Mikey Johnston after his strike against Partick Thistle this month. Pics: Geo.

“It’s a derby and every single player will be up for it. It’s going to be a bit of a difference because we’ve got more fans behind us and a lot of their players won’t have experienced this.

“We’ve got a lot of experience in our team that have faced this kind of derby before and, hopefully, that will be on our side at the weekend.

“Since the manager has arrived, he has taken my game to a different level and there’s also competition for places breathing down my neck. I can only focus on my job, which is to put the ball in the back of the net, and give the manager a selection headache.

“I’ve done that with my goal against Suduva and I’m really looking forward to Sunday now.”

He added: “I was ill all day and I was sick at half-time. I said to the manager and the doctor that I probably had about 10 or 15 minutes after the break and that would be it.

“I made one lung-bursting run and that was me!”