CELTIC youngster Eoghan O’Connell described his wonder strike against Leicester City as “lucky'” in the 1-1 draw at Parkhead.

The Hoops were trailing early in the second-half of the International Champions Cup clash, when the central defender curled a perfect low effort from the edge of the box beyond the despairing dive of Kasper Schmeichel.

It was an exquisite finish from the 20-year-old Irishman to mark his debut strike for the team. It ended all-square and O’Connell netted in the penalty-kick shoot-out, but James Forrest missed from 12 yards and the English champions triumphed 6-5. 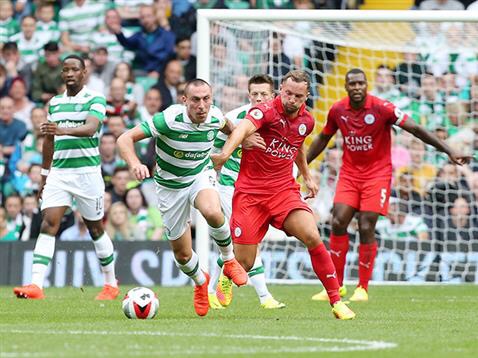 O’Connell, speaking on the official Celtic website, said: “The ball came came out and I called Stuart Armstrong to leave it.

“I just felt I could run round and bend my foot around it. Luckily enough, it went in, so I’m delighted.

“Emilio Izaguirre was out wide, so I was going to roll it to him, but I just thought: “Why not hit it?”. I went with my right foot and it went in.

“It’s my first goal for the first team. It was a good finish and I was delighted.

“We’re at the stage now where all games matter and we’ve got the Champions League tie against Astana coming on Wednesday.

“It was a very high-tempo against Leicester and I was delighted to get a goal in a big game like that.”

O’Connell added: “In the first-half, we had quite a lot of the ball, but maybe didn’t open them up enough.

“They were very dangerous on the counter-attack – they showed that last season – and their goal in the second-half shocked us, but after that we performed quite well and could have maybe gone on and won it.

“You want to win every game. Pre-season matches are all about fitness, but no-one wants to lose and we showed that.

“They showed they are very powerful and have very good players who are experienced, as well. However, I thought we handled it well and played well.”

———————–
Once Upon a Time in the Kingdom of Govania is the hilarious new book from CQN laughing at the demise of Rangers and the pretendy new tribute act playing in the big boys league for the first time this season.

If you don’t laugh your socks off we’ll be surprised! Get your copy exclusively at www.cqnbookstore.com now for only £9.99